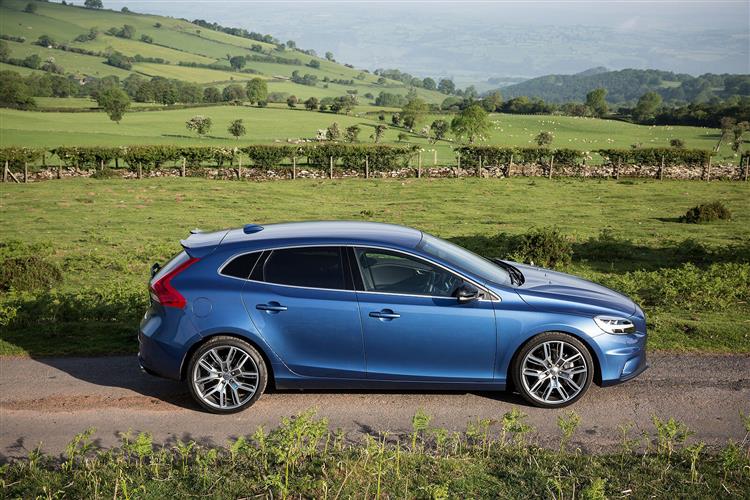 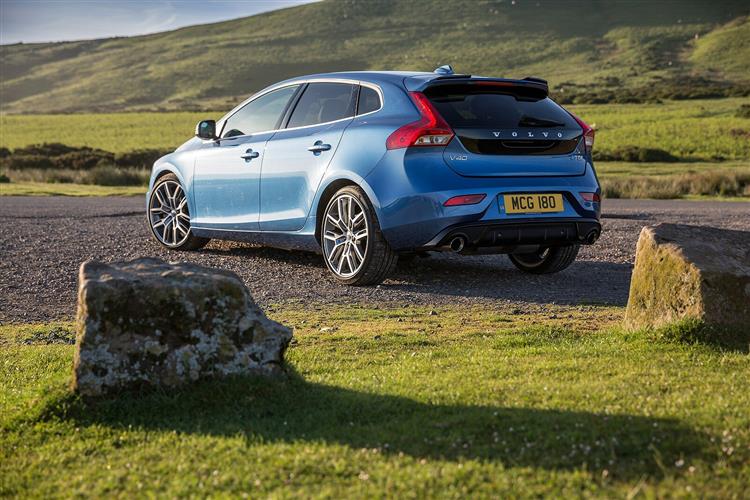 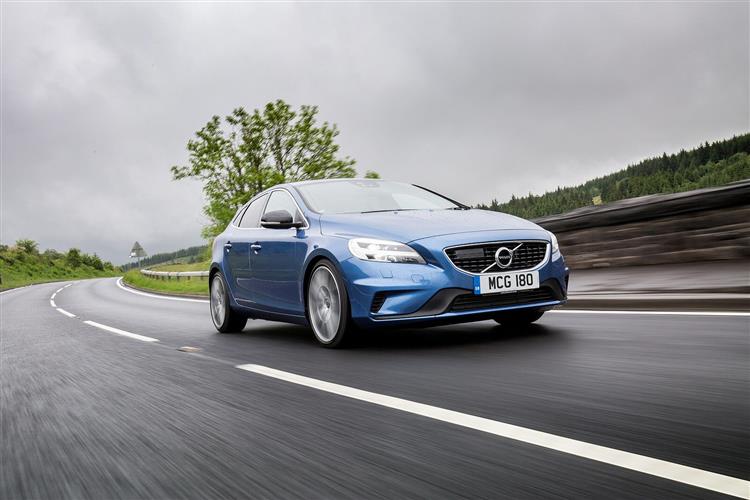 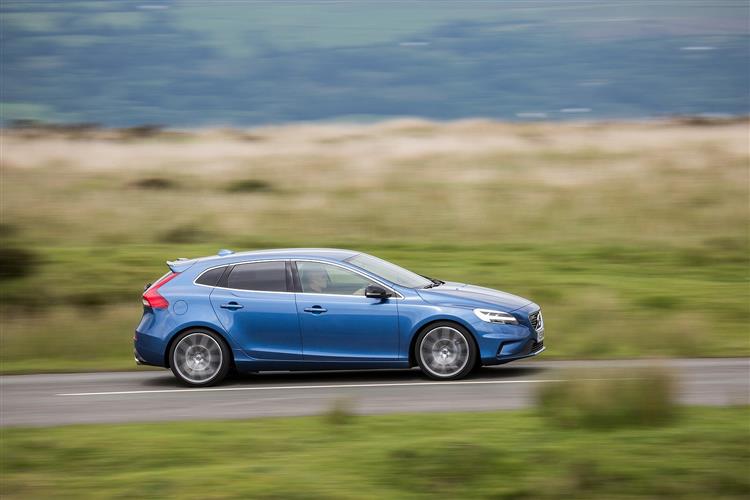 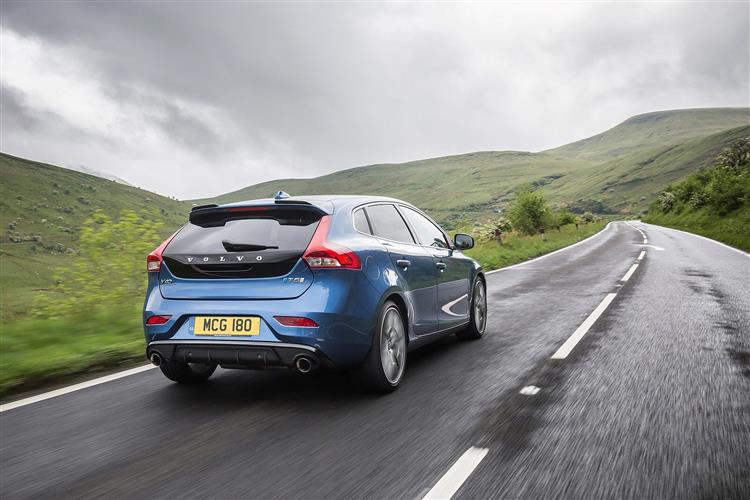 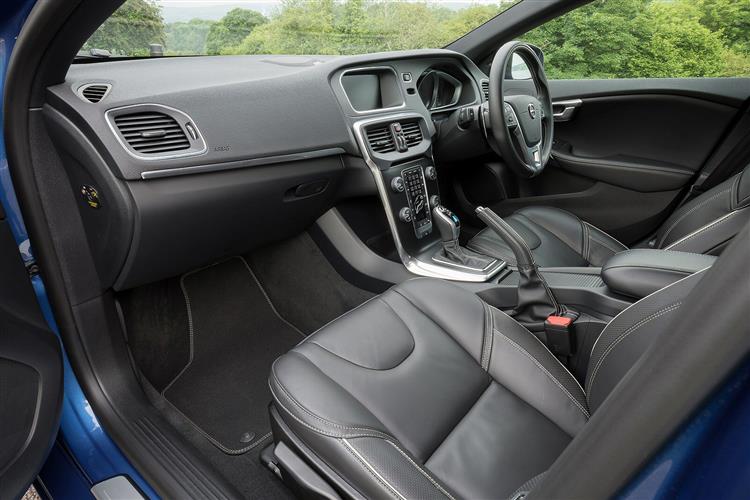 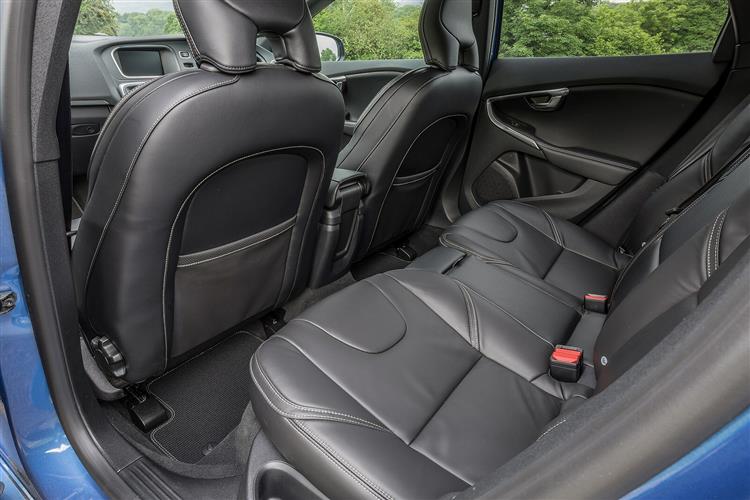 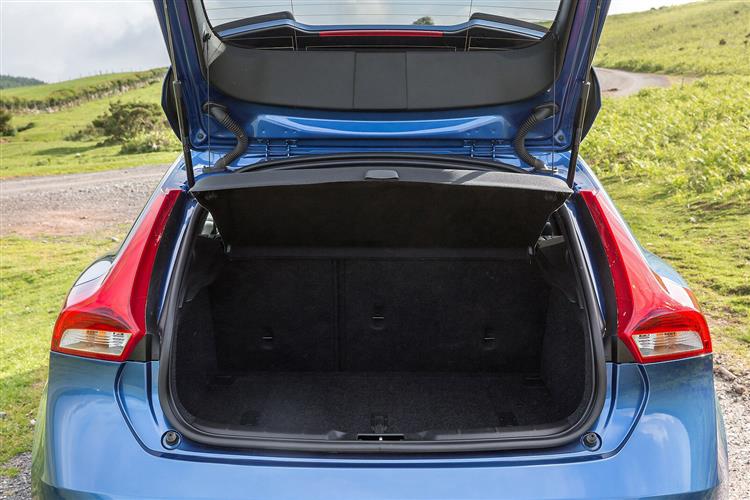 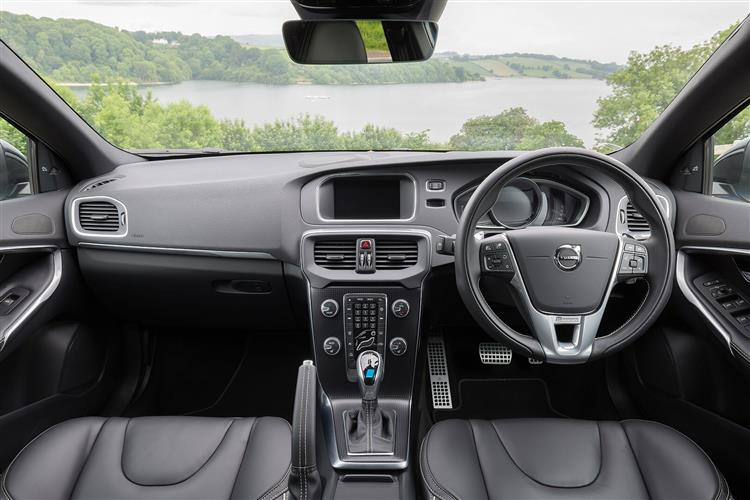 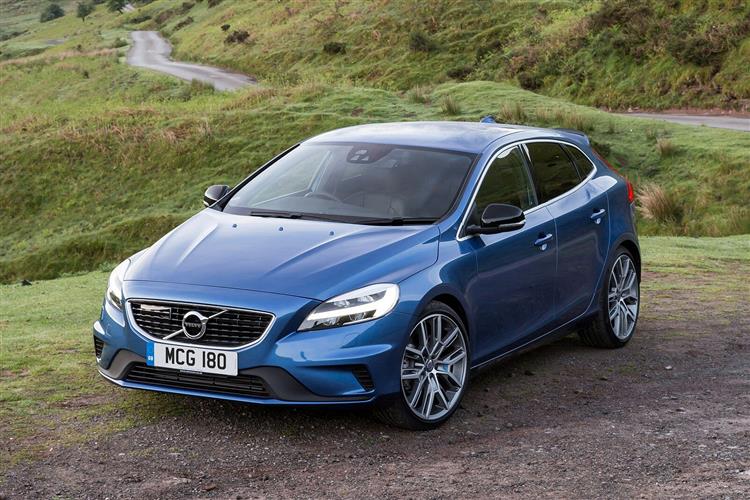 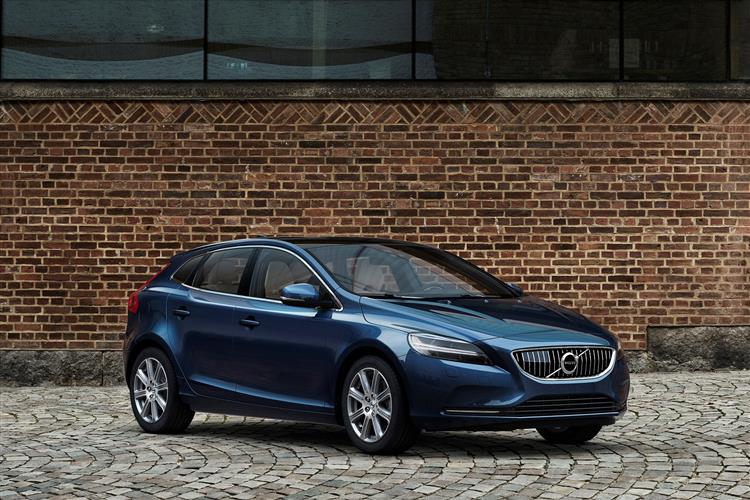 As with most things in life, the best products take what seems a complicated bunch of requirements and reduce them to something very simple and elegant. The improved, facelifted Volvo V40 is just such a car. The Swedish company has built a premium five-door family hatch that looks great, drives well, makes sense on the balance sheet and which has an amazing amount of safety equipment built into it. It really is as good as it looks, especially with a set of highly efficient 'Drive-E' engines beneath the bonnet.

Traditionally, Volvos have been better when they've been bigger. It's not that the Swedish brand hasn't tried its hardest with compact, more affordable models. On the contrary, it has a heritage in such designs stretching all the way back to the PV51 of 1936. None though has been what you'd call desirable, unless for you, desire is a virtue that's safe, solid and sensible. Here though, is a car that is. The improved V40 premium family hatch. Despite the 'V' designation, traditionally used by the brand to reference estate cars, this is a Focus-sized family hatch - but a rather posh one, aimed at the top end of this segment where you'll find premium models like BMW's 1 Series, Audi's A3 and the Mercedes A-Class. It's job is to take on these elite rivals, a task that's been made easier since the introduction of a series of petrol and diesel engines from Volvo's efficient 'Drive-E' range. Now the car's been smartly facelifted too. Let's check it out.

Here's a hatch clearly developed by people who care about driving and it delivers a very good compromise indeed of absorbent ride and assured handling composure. So much so that I've begun to question the 'less is more' mantra I tend to apply to the brand's other models when it comes to engine output. There's not much point in having loads of power in a car that handles like a pudding. This one though, can cope with a bit more, which is why it's worth opting for the fastest of the three diesel engines on offer, the 190bhp D4. Rest to 62mph here takes 7.4s en route to 143mph. All the diesel units available are now from the brand's frugal 'Drive-E' family of engines, all 2.0-litre units. The D3 develops 150bhp, while the entry-level D2 manages 120bhp. Low mileage buyers need to factor in the possibility of petrol power too, especially if they don't like the rather clattery diesel noise you get on start-up. This option is particularly worth considering now that Volvo has extended its 'Drive-E' engine family down into lower-powered models. Manual gearbox T2, T3 and T4 variants use this technology allied with 2.0-litre power, generating either 122, 152 or 190bhp. Rather curiously, if you opt for either the T3 or T4 derivatives with an automatic gearbox, you get a completely different 1.5-litre engine, though its still just as powerful and efficient. At the top of the range, the T5 variant already had 'Drive-E' 2.0-litre technology, in this case allied only with an 8-speed automatic gearbox and putting out a lusty 245bhp. Go for the 'Cross Country' model and there's the option of AWD traction for this variant too.

This facelifted V40 gets a smarter front end, courtesy of the addition of revised LED headlamps that feature the so-called 'Thor's Hammer' style that's already been seen in the brand's larger XC90, S90 and V90 series models. A smarter grille mesh completes the more confident look. As before, the V40 has a relatively low and sleek bonnet line: that's because courtesy of a unique under-bonnet airbag, it doesn't have to leave an under-bonnet void to meet pedestrian impact legislation. So the bonnet line can be much lower, part of a lean, wide coupe-like stance in a shape very slightly longer and wider than rival BMW 1 Series or Audi A3 models. Pleasantly different then, an observation equally applicable in the cabin. Of course it needs to be good if sales are to be stolen from rival German prestige-badged contenders, a tough assignment tackled with an unpretentious 'Designed Around You' philosophy epitomised by a beautifully positioned infotainment screen that, once you've figured out its complicated menus, enables you to deal with audio, navigation, 'phone and other functions almost without taking your eyes off the road. The idea is that, like IKEA furniture, this cabin should be typically Scandinavian, comfortable, simple, intuitive and visually pleasing. And broadly it is. Cabin space is fine and there's a 335-litre boot.

As before, prices sit in the £20,000 to £35,000 bracket. Buyers also get the option of finding a £1,000 model-for-model premium for the 'Cross Country' variants with their SUV-style bodystyling. To put the V40's overall pricing into perspective, for one of these, you're looking at a comparable model-for-model premium of around £1,500 over what you'd pay for a mainstream Focus or Astra in the family hatchback sector. It's not these cars that Volvo is really targeting with the V40 though. The brand would prefer to be stealing sales from much posher so-called 'premium' compact hatches, cars like the BMW 1 Series, the Audi A3 and the Mercedes A-Class. That's quite a big ask as this V40's pricing isn't really much different to any of these cars. What is different though, is the spec you get as part of the deal. All models come with alloy wheels, electronic climate control that also cools the glovebox, plus leather-trim for the gear knob and for a steering wheel that has audio controls for an eight speaker stereo with USB and iPod inputs, operable via the same 5-inch colour screen you can use to set up the Bluetooth connection for your 'phone. This display can also use Volvo's Sensus infotainment and navigation system. Within the range, you can also opt for a 'Cross Country' trim level, offering mildly SUV-style looks for a modest premium. Either way, safety-wise, there's a world first - an under-bonnet airbag that springs out to protect pedestrian in the event of an impact. Plus of course, you get all the usual basics. That means dual-stage front airbags on both sides, side airbags, a knee 'bag for the driver, inflatable curtains, ISOFIX childseat fastenings, a Roll-Over Protection system, the WHIPS anti-whiplash system and, to hopefully make sure you'll never need all that, the DSTC Dynamic Stability and Traction Control system, the usual ABS braking assistance, Corner Traction Control, Engine Drag Control to stop the wheels from locking during engine braking on a slippery surface and even a Trailer Stability Assist system if you've fitted a towbar. If you want the safest car in the family hatchback class, you're looking at it right here.

If you want the reason why more than 60% of all UK V40 customers will end up buying the least powerful 120bhp D2 diesel variant, then you don't have to look far to find it. This model is capable of a headline-grabbing 83.1mpg on the combined cycle and an 89g/km of CO2 reading that'll side-steps the need for road tax and payment of the London congestion charge. I should point out that the super-frugal returns I'm talking about only apply if this V40 is fitted with an appropriately weedy set of wheels and tyres. Bigger sizes have quite an impact on those figures, so be warned. Step up to the 150bhp D3 and it's not as if you've entered a world of big bills either. That averages 74.3mpg and emits a mere 99g/km of CO2. I'd be looking at the 190bhp 2.0-litre D4 variant though. Like its two lesser-powered range stablemates, this diesel uses Volvo's clever 'Drive-E' technology to achieve an impressive 99g/km of CO2 and 74.3mpg on the combined cycle. The same technology allows the 2.0-litre 245bhp petrol automatic T5 variant to 137g/km of CO2 and a combined fuel figure of 47.9mpg. And the more affordable petrol models? Well both the 120bhp T2 and the 150bhp T3 get latest-generation Drive-E technology in 2.0-litre form when equipped with a manual gearbox. In automatic guise though, they come with 1.5-litre units that are still notably clean and frugal, both managing 51.4mpg on the combined cycle and 129g/km of CO2.

With the V40, Volvo has brought its brand up to date - and continues to do so. More fashionable styling clothes some serious safety in a very assured piece of design further improved by Volvo's own 'Drive-E' 2.0-litre petrol and diesel engines. Gothenburg has taken on the Germans before - but never like this. In the premium compact hatch segment, only BMW's 1 Series can out-handle this car - and that's only because of its rear wheel drive, a layout Volvo thinks is better suited to Silverstone than Surbiton. In any case, careful development of this car's dynamic Focus-inspired underpinnings has left us with a car an enthusiast might still enjoy. Which is a surprise. But then, much about this car is. Efficient yet characterful, stylish yet sensible, it ought to appeal far beyond Volvo's core customer base. It ought to, but it may not. BMW, Audi, Mercedes - even Alfa Romeo customers: they're all pretty parochial. They shouldn't be. A drive in one of these would blow away quite a few prejudices. Whoever would have thought it?

Fill out the simple form below to get a quote for this VOLVO V40 HATCHBACK lease.