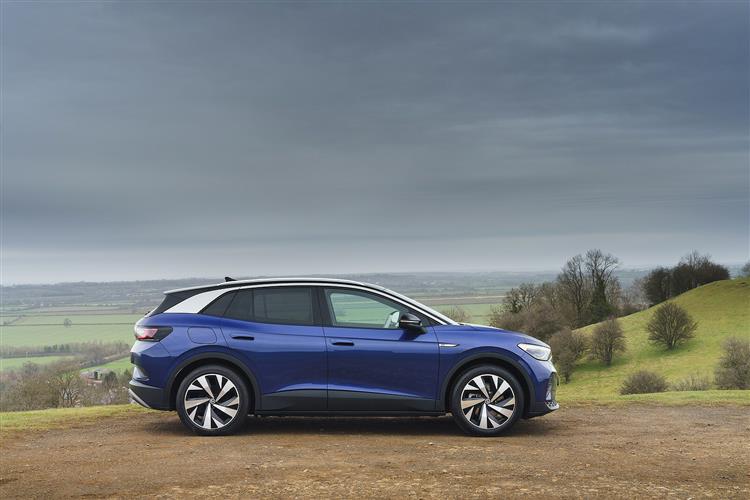 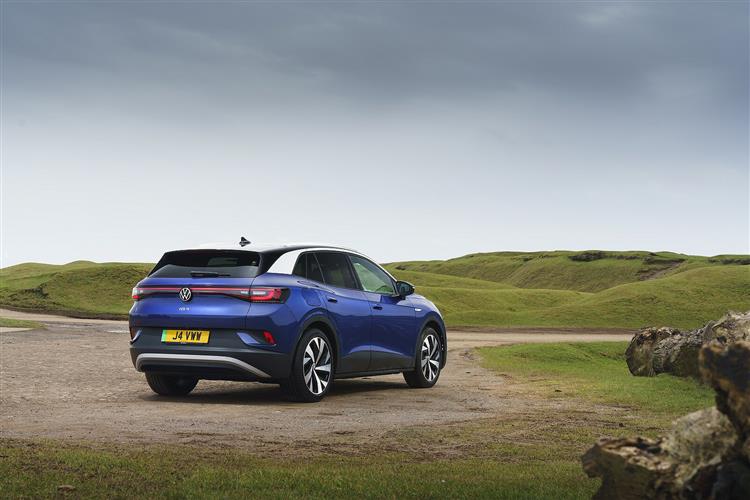 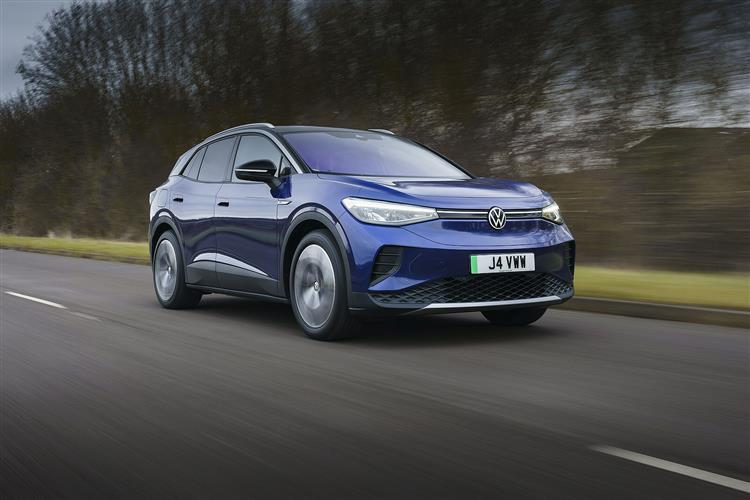 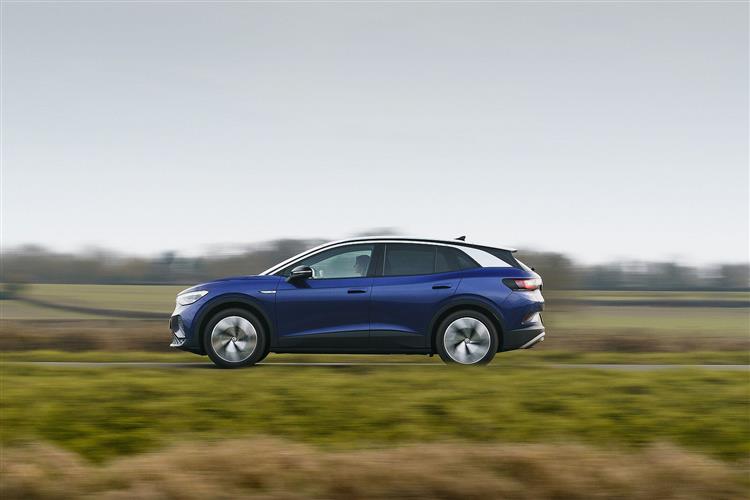 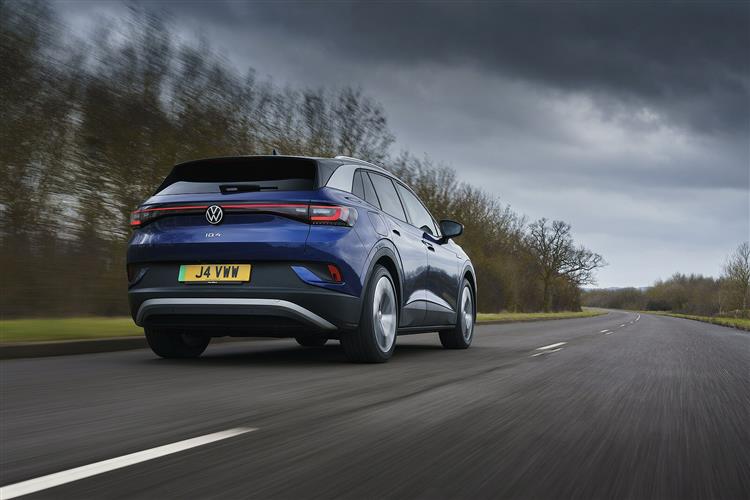 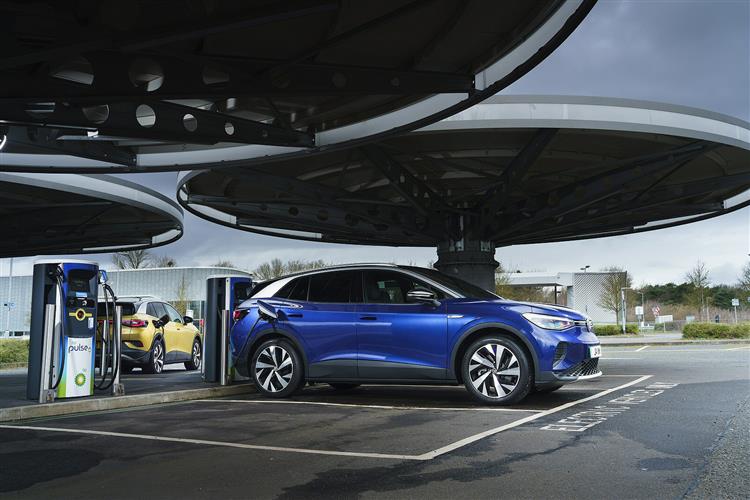 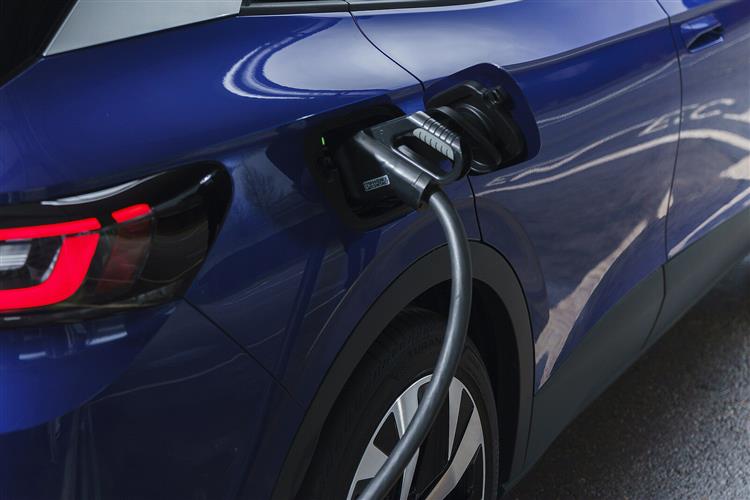 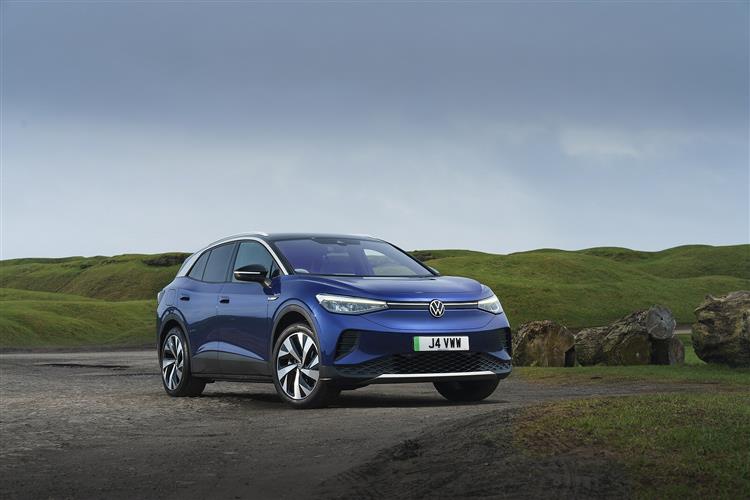 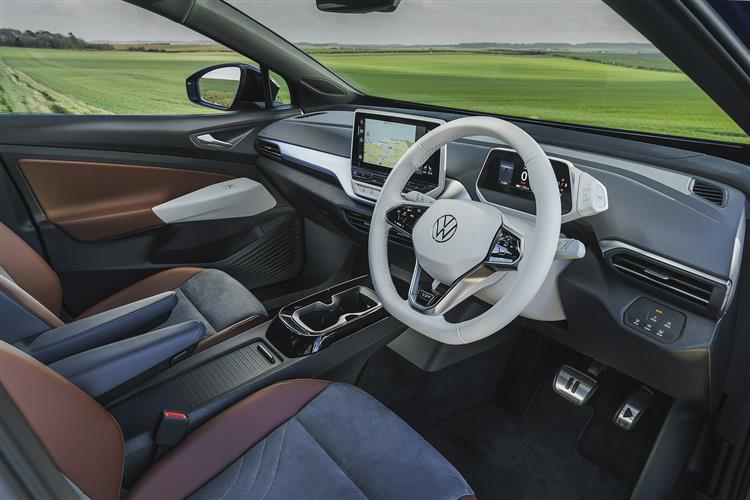 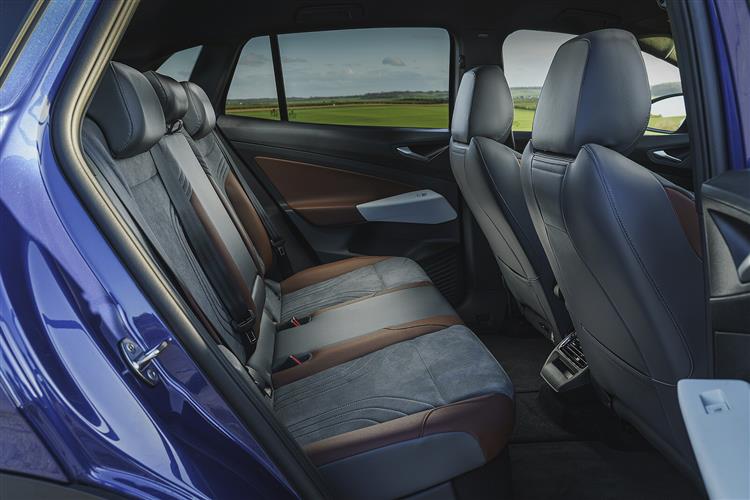 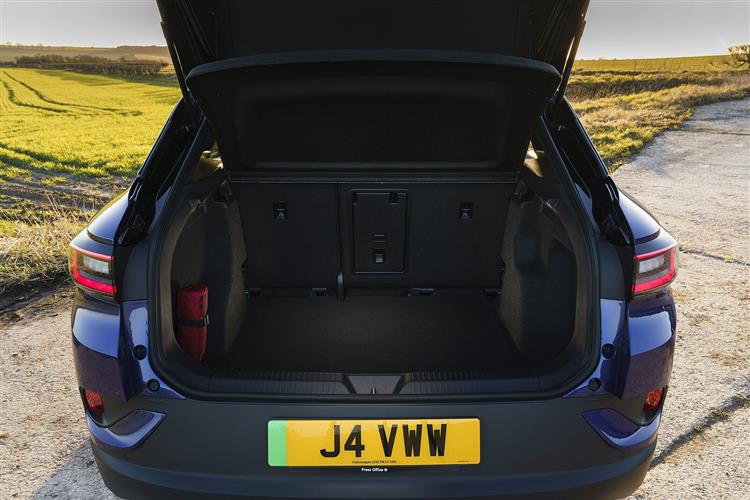 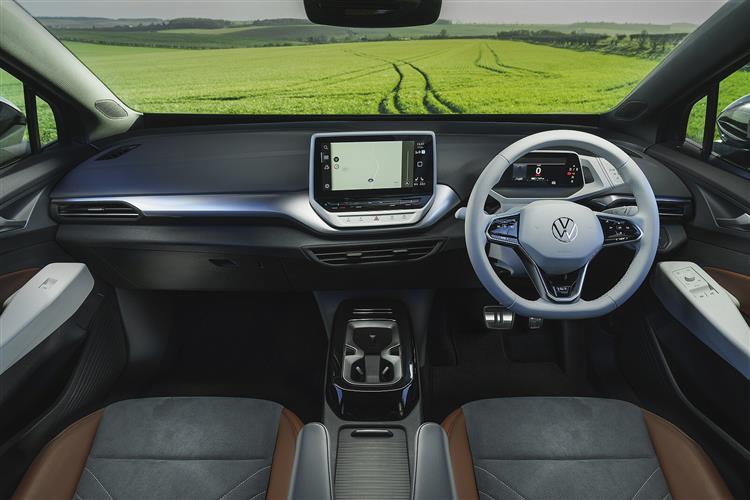 Volkswagen ramps up its efforts in the EV segment with this ID.4 compact mid-sized Crossover, the marque's first global market electric vehicle. It aims to deliver more of a premium choice than volume brands can currently offer in this rapidly growing segment. Ready for the EV switch and need a reasonably compact SUV with a bit more of an up-market feel? We think you might be tempted by this one.

If any further proof was needed that Volkswagen is serious about EVs, the ID.4 provides it. This is the first all-electric model the Wolfsburg brand will sell globally and will play a key role in the realisation of the maker's plan to sell 1.5 million EVs worldwide by 2025. Expect the ID.4 to account for about a third of that total - so yes, it could hardly be more important. As you can see from the pictures, it's a compact mid-sized SUV which aims to take on established similarly orientated EV crossover contenders like the Kia e-Niro and the Hyundai Kona Electric. And new ones like the Ford Mustang Mach-E and the Tesla Model Y. In line with this ID.4's global pretensions, it's being built not only in Germany (at VW's Zwickau plant) but also by factories in China and the US. As you'd probably expect, all the engineering here is shared with the similar VW Group EVs that campaign in this class, the Skoda Enyak iV and the CUPRA el-Born, two cars who represent arguably this Volkswagen's closest rivals. And predictably, the ID.4 uses the same MEB electric platform that features in the existing (and only slightly smaller) ID.3 hatchback.

There's a bit to adapt to if this is your first experience of EV motoring. No gearstick, no handbrake, no ignition key and just the sound of silence as the fixed ratio transmission blends an almost endless wave of torque into meaningful and surprisingly rapid forward progress. The forward thrust away from rest isn't quite as abrupt as it is in Volkswagen's smaller ID.3, mostly because the ID.4 is nearly 200kgs heavier, a factor which affects most areas of this car's drive demeanour, sometimes helpfully, sometimes not. That of course is a legacy of the substantial battery packs it must carry about. Base models, which respectively feature electric motors developing either 148PS or 170PS, use a 52kWh lithium-ion unit offering a claimed driving distance of up to 213 miles. The longer-range variant, using a motor putting out 204PS, has a rather more substantial 77kWh battery that ups that to as much as 310 miles. Like Volkswagen's original post-war Beetle, this car is rear-driven and when you drive it in town, you quickly realise the real advantages of placing the powertrain - the electric motor and its associated single-speed auto gearbox - on the back axle, thereby freeing up the front wheels for steering duties; the result is a London taxi-like 10.2-metre turning circle. Beyond the city limits, that drive format allows for a near-50:50 almost perfect weight distribution which, together with the low centre of gravity provided by the central battery pack placement, helps disguise the portly weight this SUV must carry around. Traction through the turns is excellent and body roll is checked by firm damping cleverly engineered for suppleness over poor surfaces. All of which ought to provide the recipe for a decently sporting EV - and in some ways it does, though the steering, while accurate, offers disappointingly little real feedback. If you do prioritise performance in your choice of ID.4, Volkswagen wants you to consider the top flagship GTX variant, which sees the top 77kWh battery mated to electric motors on both axles, which delivers 4WD capability and more potent 299PS total output. That variant gets an extra 'Traction' mode to add to the other drive settings common across the model line-up; there's 'Comfort', 'Sport' and 'Individual'. Plus you get an 'Eco' setting that, to maximise range, you'll need to frequently use in combination with the available 'B' regenerative braking function, which slows the car significantly when you come off the accelerator.

The ID.4 shares many styling cues with its ID.3 hatch stablemate but it's a slightly bigger thing, 4,584mm long, 1,852mm wide and 1,612mm tall. To give you some perspective, that makes it 102mm longer and 13mm wider than Volkswagen's more conventional Tiguan mid-sized SUV. Full-LED headlights are standard and top models get big 20 or 21-inch wheels. Inside, there's an open, minimalist design with a digital screen behind the wheel for the instruments and a central infotainment touchscreen that'll be either 10-inches or 12-inches in size, depending on the trim level you've chosen. A rocker switch attached to the steering column is used to select the three available drive modes. And all the main cabin features are accessible via advanced "Hello Volkswagen" voice control. One hi-tech feature we really like is the impressive augmented reality head-up-display, which artificially projects key information and navigation commands straight onto your view of the road ahead. At the back, there's comfortable space for a couple of adults (it'd be a squash for three). And there's a very decently-sized 543-litre boot, extendable to 1,575-litres with the rear seat folded. A tonne of weight can be towed too, this being the first Volkswagen EV to be offered with the option of a tow bar.

Most UK ID.4 customers want the 77kWh battery pack with the fastest 204PS 'Pro Performance' motor, this package offered in 'Life', 'Family' and 'Max' forms, at prices starting from around £41,000 (which, sadly, means that the car won't qualify for the goverment's £2,500 Plug-in Car Grant). From launch, there was also a fully kitted out 'First Edition' variant. Even base 'Life'-spec gets you 30-colour ambient lighting, split-folding rear seats with a load-through hatch, a centre armrest and 'play and pause' pedals, all as part of the 'Interior Style' Package. The 'Infotainment Package' is also included at this level, incorporating a 10-inch 'Discover Pro' touch-screen system with navigation, and inductive smartphone charging. Luxury and convenience are covered by the included 'Comfort Package', which comprises a heated, infrared-reflecting, sound-insulated windscreen; two front and two rear USB ports; 2-zone climate control; and heating for the front seats and steering wheel. Next up in the range is the ID.4 'Family' model, which adds attractive 19-inch 'Hamar' alloy wheels and upgraded equipment packs. The included 'Design Package Plus' brings IQ.Light LED matrix headlamps which feature the signature LED strip extending from each headlamp and meeting at the Volkswagen roundel. LED lighting also features in the door handle recesses and in the rear lights, the latter having a unique 3D structure. Privacy glass for the rear windows and a large panoramic sunroof complete the pack. Meanwhile, the included 'Comfort Package Plus' upgrades the climate control to a 3-zone system, and provides convenience-boosting features for the car's luggage area including a net partition and luggage net, while the Assistance Package adds a rear-view camera, and Keyless Access locking and starting system. As the flagship of the current ID.4 range, the 'Max' is the most comprehensively-equipped variant, including Volkswagen's 'Infotainment Package Plus', which gives you a larger 12-inch Discover Max infotainment system, as well as an augmented reality head-up display. Also included at this level is an 'Interior Style Plus pack' that gives you 12-way power-adjustable heated front sports seats with a massage function. Across the ID.4 range, you get a range of safety features including Adaptive Cruise Control, Front Assist, and Lane Assist, with parking sensors front and rear.

As we said in our 'Driving' section, base models, which respectively feature electric motors developing either 148PS or 170PS, use a 52kWh lithium-ion unit offering a claimed driving distance of up to 213 miles. The longer-range 77kWh variant with its 204PS motor, ups that to as much as 310 miles. To achieve that, you'll need to frequently use the provided 'Eco' drive mode setting, ideally in combination with the available 'B' regenerative braking function, which slows the car significantly when you come off the accelerator. Whatever ID.4 model you select, your charging regime should be quite straightforward. There's a 'We Charge' app that helps you find and use over 150,000 public charge points. An AC1-phase 7.2kW garage wallbox would replenish the 52kWh model from zero in about nine and a half hours; think a little over 12 hours for the 77kWh variant. What about if you find a public rapid charger along your route? Well the smaller 52kWh battery supports 100kW DC charging; the 77kWh battery ups that to 125kW, which means that even on this longer range model, at a DC3 100kW charge point, it'll take no more than around 30 minutes to recharge your ID.4 with enough direct current to cover the next 137 miles. You should also make savings in BiK payments (there's a 0% rating), as well as road tax, congestion charging and the fact that no oil changes are required. Volkswagen says that its aim is to make sure that the battery pack lasts as long as the car and, sure enough, that battery pack is warrantied to have at least 70% of its usable capacity after eight years or 100,000 miles.

This isn't yet a mainstream Volkswagen model, but the day isn't very far off when it will be. When that happens, we can only hope that EVs will have become rather more affordable than they are now. But if this ID.4 sells globally in the kind of numbers Volkswagen is hoping for, that's unlikely to happen. Like all brands, the Wolfsburg maker will charge what customers show they're prepared to pay. So is this ID.4 worth its sticker price? Many customers will think so. It has the quality look and feel of a premium brand product; enough (just) to justify its extra cost over its identically-engineered Skoda Enyak iV and CUPRA Born VW Group cousins and close rivals. Ultimately, if all you care about in a Crossover EV of this kind is value and driving range, this probably won't be your first choice. But if your priorities are a little broader than that and you want a little more 'feel good' factor in a car of this sort, this ID.4 might well have your number.

Fill out the simple form below to get a quote for this Volkswagen Id.4 Electric Estate 109kw City Pure 52kwh 5dr Auto lease.