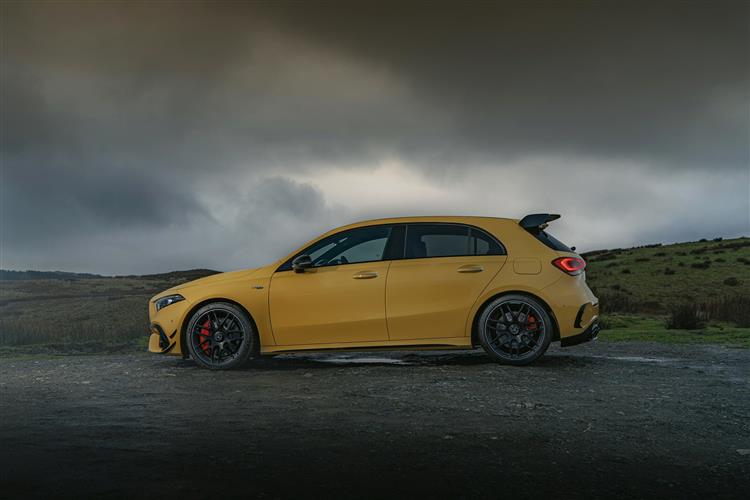 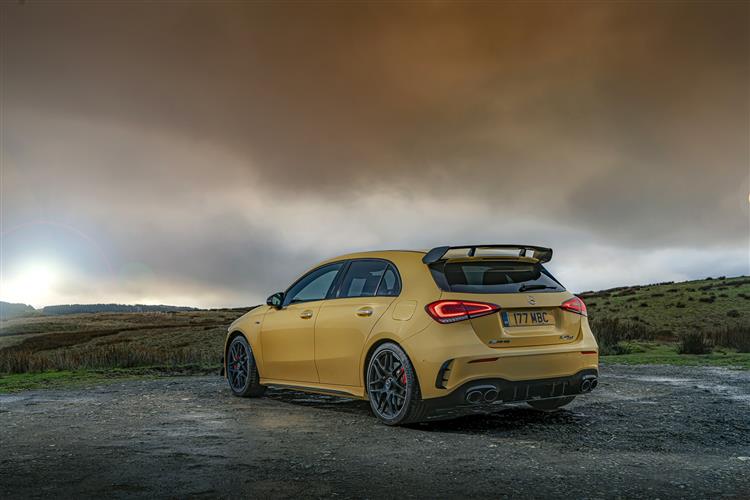 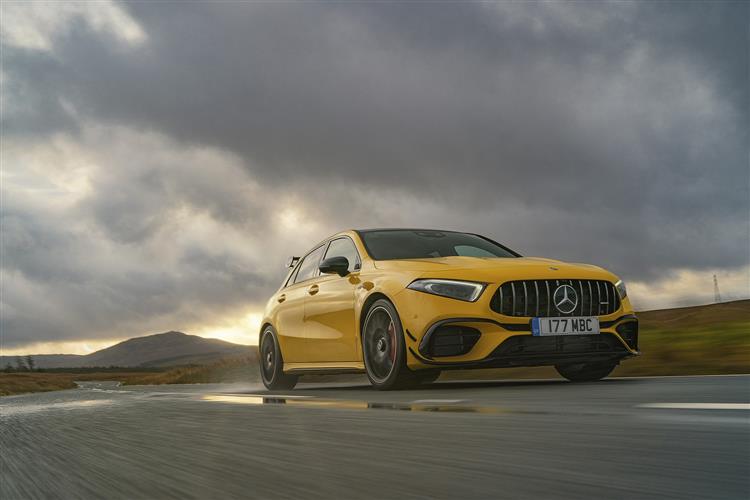 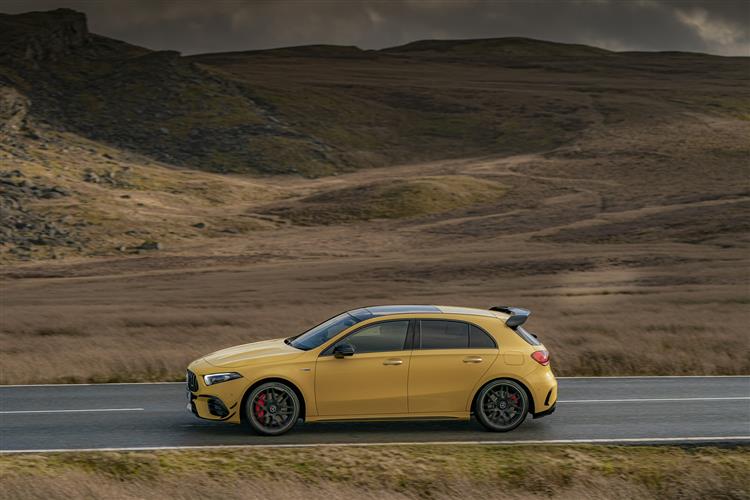 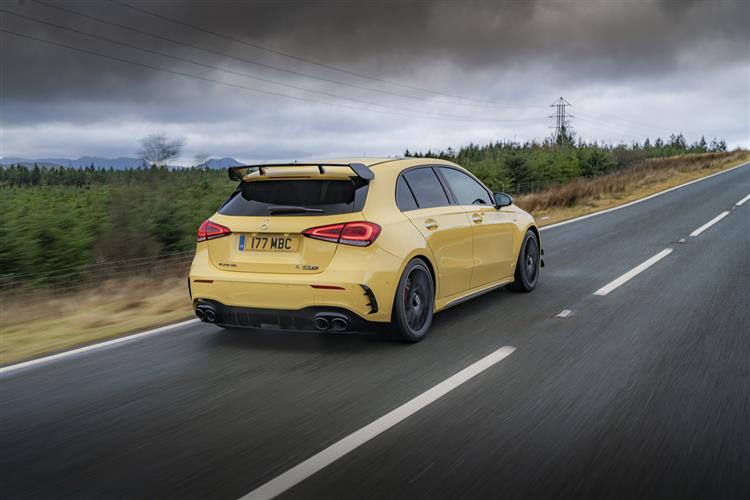 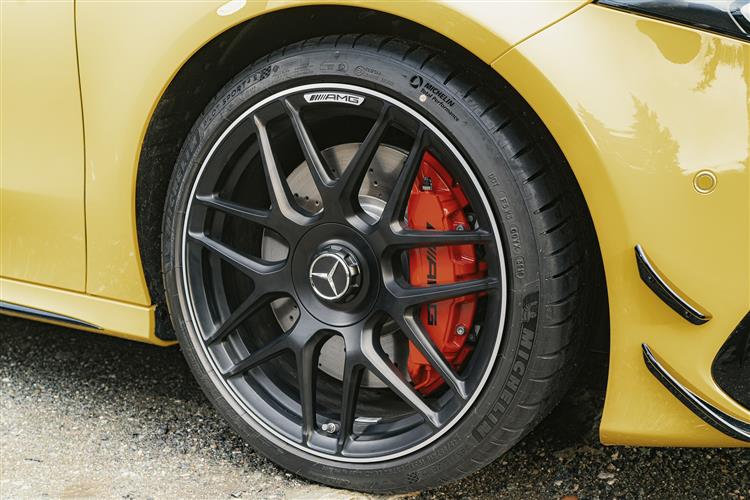 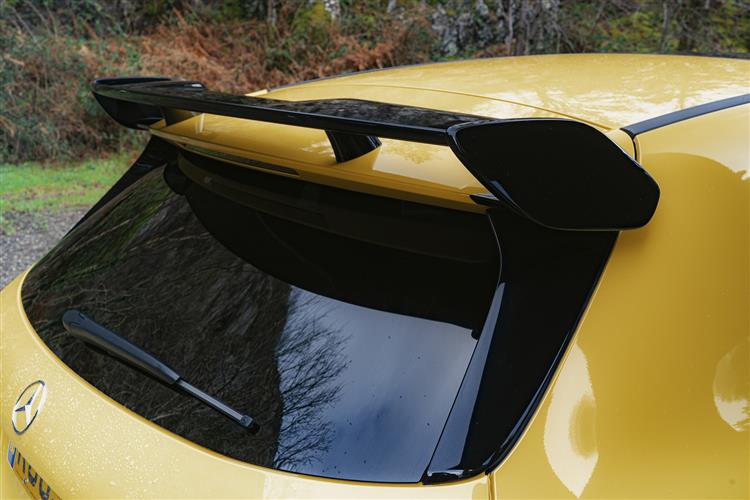 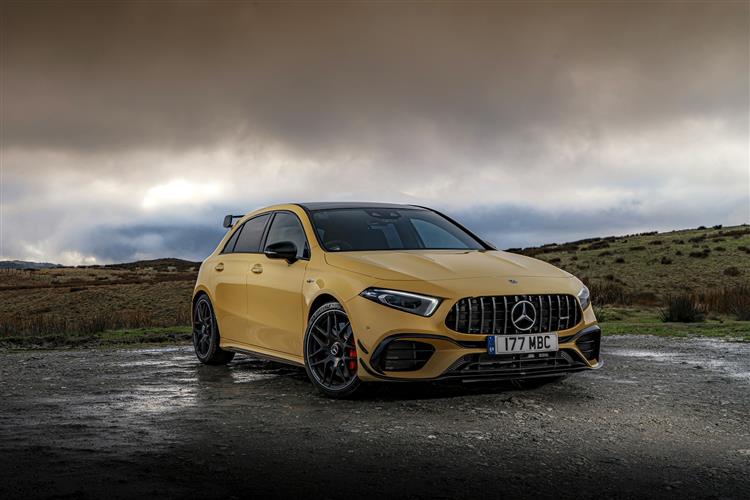 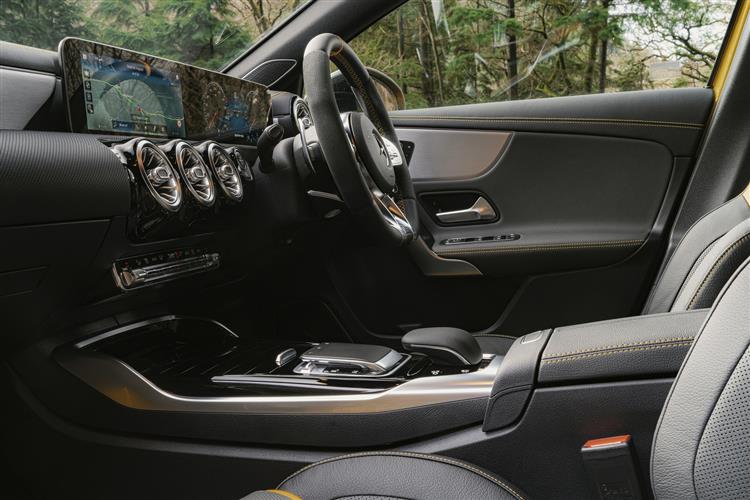 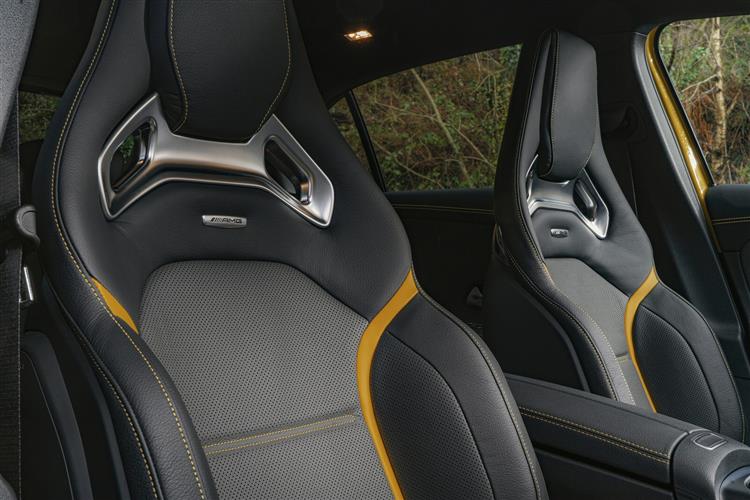 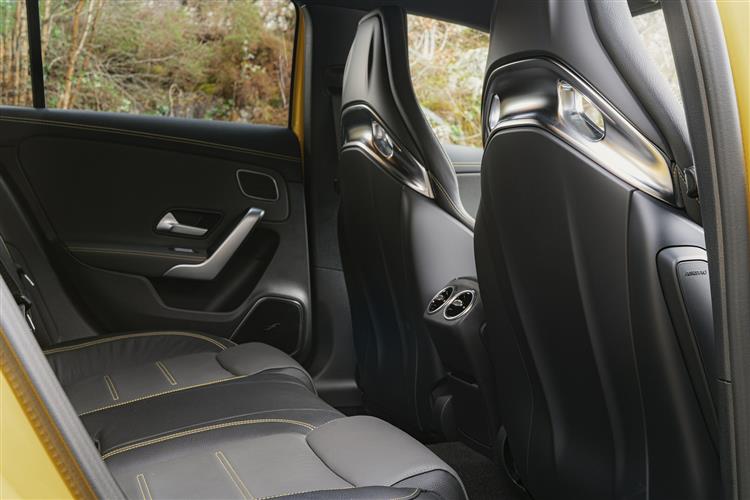 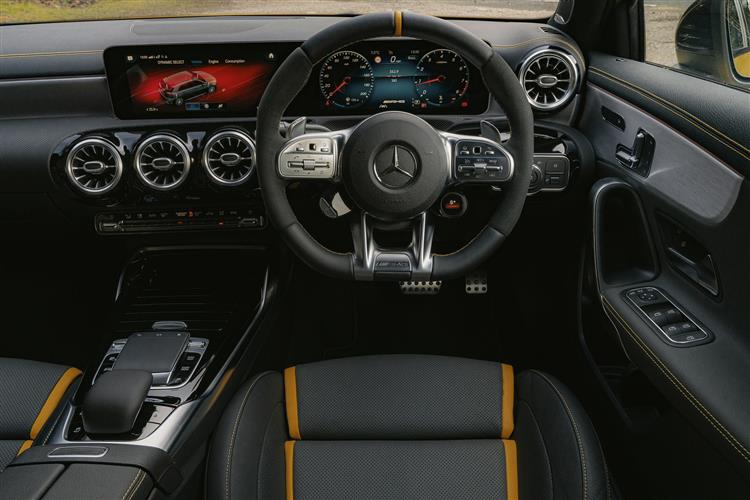 With all-wheel drive and a massive 421hp punch, the Mercedes-AMG A 45 S 4MATIC+ is the giant killer that followers of Mercedes-Benz have been waiting for. If you want a devastatingly quick hatchback that can do it all, this is where you should start your search. What's not to like? The price? Well you can't have everything....

Just how far can you take a hot hatch? In terms of price? Performance? Traction? Quality? It's an interesting question - and here perhaps is the answer, the Mercedes-AMG A 45 S 4MATIC+. The Three-Pointed Star entered the hot hatch segment in 2013 with its 360hp 4WD first generation A 45 model, a car with more power than any shopping rocket had previously ever offered. But straight line speed isn't everything in a model of this sort and it was soon clear that this pricey contender lacked the finesse of super-GTi rivals like Honda's Civic Type-R and Ford's Focus RS, even when the AMG brand updated the car with a 381hp powerplant in 2015. That power output was trumped two years later by the 400hp powerplant shoe-horned into the Audi RS 3: the A 45 was out-gunned. So the engineers from Affalterbach have tried again with this second generation A 45, offered in our market only in 421hp 'S' form. There's never been a Mercedes quite like this one. Let's take a look.

There's only one engine on offer for UK A 45 buyers but it's quite a powerplant. A 2.0-litre four-cylinder unit might not immediately promise great fireworks, but this one comprehensively trumps the 400hp 2.5-litre lump in the Audi RS 3. You get a hefty 421hp from a relatively lightweight hand-built twin-scroll turbo engine (which is 40hp than the equivalent version of the previous generation model). That's in '45 S' version form, the only variant of this car offered in our market. Mercedes claims this car's engine to be the most powerful series-production four-cylinder turbo powerplant in the world and although you might well remember the odd Mitsubishi Evo with a few more ponies under the bonnet, for the time being at least it's impossible to argue with Mercedes' claim. This engine develops 500Nm of torque from just 2,250rpm (up from 475Nm before), again incrementally better than the RS 3 Audi can manage. 62mph from rest takes 3.9s en route to 168mph. Drive naturally goes to all four wheels and you get an AMG SPEEDSHIFT DCT 8-speed dual clutch sports transmission which has a RACE-START function and various AMG DYNAMIC SELECT driving modes enhanced by AMG DYNAMICS integrated agility control. Traction through the bends is enhanced by AMG Performance 4MATIC+ all-wheel drive with AMG TORQUE CONTROL. Plus there's bespoke AMG suspension with adaptive damping based around the three modes of AMG RIDE CONTROL. There's also a high performance braking system and circuit fiends can play with an AMG TRACK PACE app.

Unlike with the lesser A 35 model, you don't have to spend a fortune on add-on exterior bits for this A 45 model to look properly menacing. The imposing presence is accentuated by the wider front wings with flared wheel arches shrouding big 19-inch AMG wheels and there's an AMG-specific radiator grille with a wider lower contour and twelve vertical louvres. The front apron features a jet-wing design, while horizontal fins in the outer air inlets and the stretched lower air inlet emphasise the impression of width. At the same time, the pronounced "shark nose", the slim, deeply contoured headlamps and the flat, aerodynamically favourable bonnet with powerdomes visually lower the front section to create the impression of extremely dynamic forward thrust. Inside, there are contoured sport seats with firm lateral support, double topstitching in red and red designo seat belts, plus AMG carbon fibre-look trim elements in the dashboard support. Yellow trimming highlights distinguish the status of this S-Model and there's an AMG Performance steering wheel in nappa leather and DINAMICA microfibre with contrasting yellow topstitching. Otherwise, it's the standard A-Class recipe, with twin front fascia screen and an advanced MBUX infotainment system. There's reasonable rear passenger space on a sliding rear bench - and a practical 370-litre boot.

Expect to pay around the £50,000 mark for this 421hp A 45 S 4MATIC+ - or more if you want to allow for some well chosen extras. There's also a better equipped 'Plus' variant available for £6,000 more. Either way, that's about £14,000 more than you'd pay for an equivalent version of the next hot hatch down in the 306hp A 35 4MATIC model. If you want a sleeker shape with this A 45 model's same powertrain and engineering, then that's available for around £1,500 more with the CLA 45 S 4MATIC+ model; and if you can stretch to around £53,500, there's a bit of extra stylish practicality in the shape of the CLA 45 S Shooting Brake 4MATIC+ estate. You do at least get plenty for your not-inconsiderable outlay. Aside from everything we've so far mentioned, there are three bespoke AMG display styles ("Classic", "Sport" and "Supersport") for the instrument cluster. The "Supersport" mode is particularly striking with a central, round rev counter and additional information presented in the form of bars to the left and right of the rev counter: with a three-dimensional perspective, they reach far into the background to an artificial horizon. We also love the standard AMG exhaust system. Depending on the choice of drive program, its sound signature ranges from harmonious and discreet (in the programs Slippery, Comfort and Sport) to emotive and sporty (in Sport+ and RACE). The sound characteristics are controlled by an exhaust gas flap, depending on engine speed and load. AMG Real Performance Sound is available as an option. Many buyers will want to upgrade to the larger optional 20-inch AMG Performance light-alloy wheel rims and the DTM-style winged AMG Performance front seats.

The emissions figure of the A 45 S 4MATIC+ (192g/km WLTP) seems scarcely credible given that this is a 421hp super hatch that hits 62 in less than four seconds. To really put that figure into perspective, we'll tell you that it's virtually the same as the lightweight Toyota GT86 sports coupe; a car with no all-wheel drive, no usable rear seats, no turbocharger and which develops less than half the torque of the A 45 AMG. That's quite jaw-slackening. Equally impressive, given the performance on offer here, is the WLTP combined cycle fuel economy figure (33.6mpg) Mercedes is quite upfront about how it's making those numbers. The combination of multiple fuel injection and multiple spark ignition improves fuel economy and significantly increases the thermodynamic efficiency, leading to low exhaust emissions. The injection system's outstanding flexibility also ensures a high degree of freedom in terms of application. There are up to five injections per combustion cycle in the cold-start and warm-up phase, which is so crucial for emissions. Residual values are bound to be sturdy, as the GLA and CLA versions of this model have already proved. The promise of a hot Mercedes shopping rocket with low running costs and high build values isn't going to be lost on used buyers.

In the real world, this is probably the fastest car that Mercedes' AMG division has ever made. At launch, it was certainly the fastest hot hatch ever made. And the best? That'll depend upon your performance priorities. There may be more rewarding shopping rockets but there aren't any more effective ones. This is automotive evolution happening right before our eyes, the distillation of everything Mercedes knows about performance cars into one small, perfectly formed package. It's all there. The hand-built AMG engine. The manic all-weather performance. The class-leading safety. The uniquely up-market interior. When it all comes down to it, you might think it debateable whether this A 45 really offers anything much more over, say, a far more affordable 306hp A 35 AMG 4MATIC model, other than being slightly quicker to 62mph. But if you have the funds, you've been waiting for the ultimate AMG hatch and you've been wondering what the Mercedes of small performance cars might be like, questions like that won't matter. For customers seduced by that prospect, this A 45 provides a devastatingly effective statement of intent. Worth the wait? You bet.

Fill out the simple form below to get a quote for this MERCEDES-BENZ A CLASS AMG HATCHBACK A45 S 4Matic+ 5dr Auto lease.