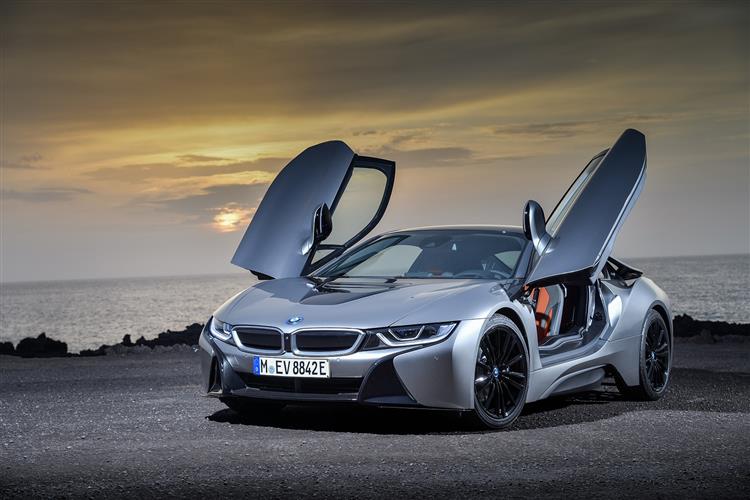 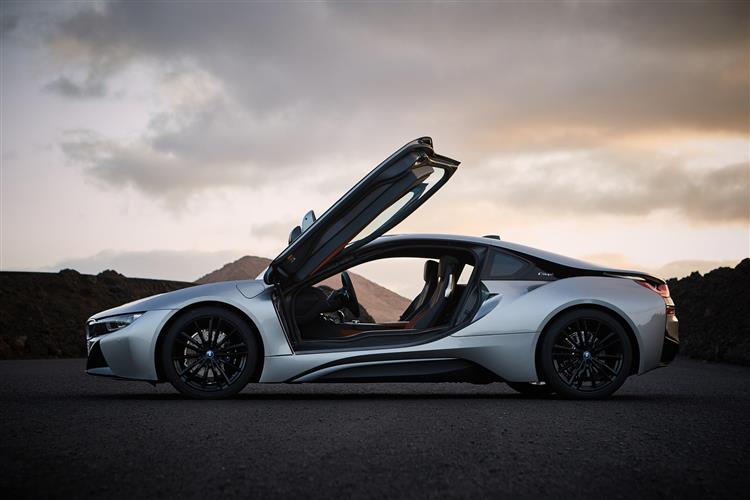 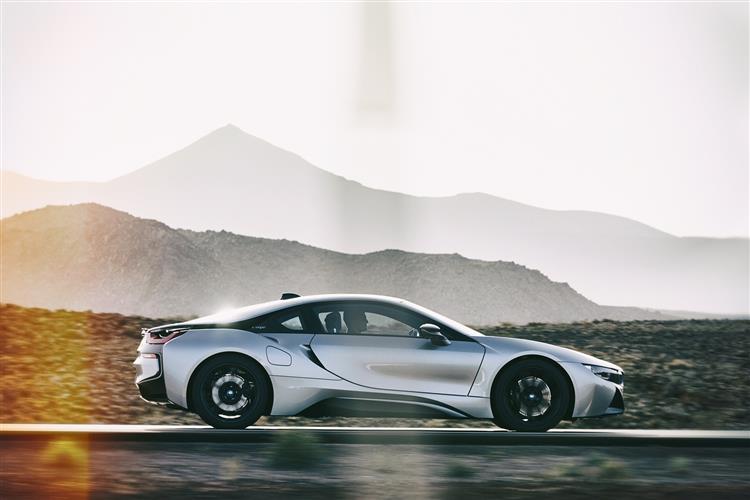 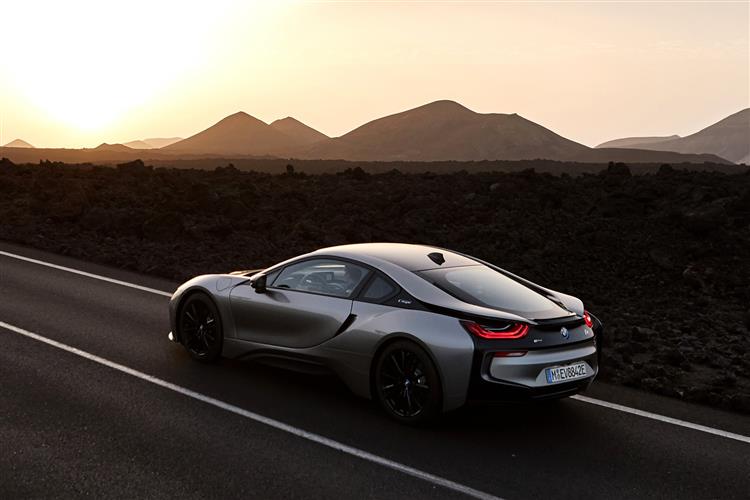 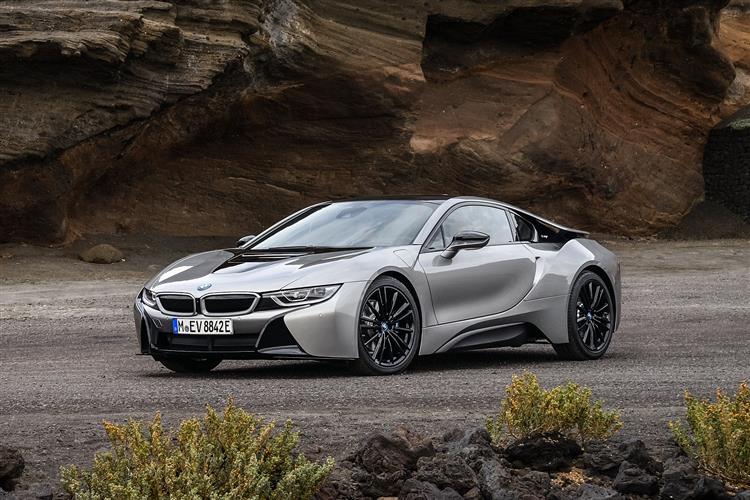 The improved BMW i8 Coupe is a hybrid supercar now capable of delivering a 374hp punch if provoked. Alternatively, it can glide noiselessly along on pure electric power with an even greater all-electric range. The quoted fuel economy figures need taking with a grain of salt but if you wanted a vision of the future of sports cars, you're looking at it right here.

Right from its launch in 2014, the BMW i8 has set a fresh course for what a high performance sportscar really ought to be. It's paraded as a paradigm shift in sports car development. A car that makes existing petrol-powered coupes look about as cutting edge as a video cassette recorder. Well now BMW has improved it. First by offering buyers the option of an expensive open-topped Roadster version. And second, by using the latest technology to considerably enhance the hybrid powertrain, which features on the Coupe derivative that's our focus here. There's now more power, more torque, great economy and cleanliness, plus the all-electric driving range can now be as much as 32 miles. There's a very high price to pay for all this technology of course but, as BMW is quick to point out, no other car in this class can offer anything like this. Here's proof that 1.5-litres of internal combustion and a battery pack deserves to be taken extremely seriously.

There's more performance on offer from this revised model. The MINI Cooper-derived three cylinder 1.5-litre engine now puts out 231hp. At the same time, the energy capacity of the lithium-ion battery it works alongside has increased from 20Ah to 34Ah, creating an improved net energy capacity of 11.6kWh. That's made it possible to raise the electric motor's power output to 143hp. All of this means that the combined electric motor and engine ouput is now 374hp (previously it was 357hp). And that's a lot in a sportscar weighing less than 1.5-tonnes. 62mph from rest now takes just 4.4s in the Coupe. The top speed, as before, is rather pointlessly pegged at 155mph. As you might expect, the i8 has a number of tricks up its sleeve. In eDRive mode, it's a front-wheel drive electrically powered vehicle with an improved range of 32 miles. Select Comfort mode and the i8 is a plug-in hybrid with a range of over 300 miles. Choose Sport mode by slotting a small lever from 'D' to 'S' and the i8 goes feral, the petrol engine and motor double-teaming to really bring the excitement. The damping will tighten, the power assistance for the steering will taper off and the software will juggle the torque split for maximum entertainment. There'll be some artificial noise piped into the cabin but it should sound good. The six-speed 'automatic transmission has been chosen over the ZF eight-speeder to save weight but it's a good unit. The calibration of the braking between regenerative and mechanical is something many manufacturers should benchmark. The i8's centre of gravity is admirably low, but the 215/45 R20 front tyres have been chosen as much for their green credentials as anything else and will be the first thing to lapse into gentle understeer if you manhandle the car. Wider tyres are optionally available as long as you don't mind a small economy trade off. Keen drivers should certainly tick that box.

The i8 Coupe still looks like no other car. It's sleek and clean in its detailing and features beetle-wing upwards opening doors. I can't think of another rival in its price bracket that offers quite so much visual drama. Given that you could easily blow a similar £110k budget on a Porsche 911 Carrera, the BMW moves the game on. Suddenly Audi's R8, a car that once looked so bold, looks a bit under-baked. The i8's rear end is particularly unusual, with no visible exhausts and what looks to be the tail of a Porsche 911 being enveloped by the plastic bodywork. Once you see it, you won't be able to forget it. The i8 keeps its kerb weights low thanks to a body that's a mix of carbon fibre and aluminium. The chassis is aluminium and the upper 'Life' passenger cell is carbon but BMW hasn't gone all race-tech and stripped-out. Coupe buyers tend to value the small rear seats too. As for the rest of the cabin, well even if you hid the badges, the smooth sweep of the dashboard and the excellent ergonomics clearly bear Munich's mark. The dash is an LED virtual screen with another display popping up from the dash roll top. It's very nicely executed but surprisingly, not as adventurous as the humbler i3 hatch. Practicalities include a 42-litre fuel tank, a 12.3 metres turning circle and, in the Coupe, a rather puny 154-litre boot.

BMW quotes a list price of around £115,000 for the i8 Coupe - around £12,000 less than the price of an i8 Roadster. Whether or not that strikes you as a bargain very much depends on what you want the car to do. If you want it to rip up mountain switchbacks like a 911 GTS, you're going to be a bit disappointed. The i8 isn't that sort of hooligan. If, on the other hand, you appreciate the technology, its straight line urge and the amazing feeling of rolling along in pure electric mode, then the futuristic styling and sheer presence of the i8 makes it seem a veritable bargain. As much as I love taking a car by the scruff of the neck and detest the typical supercar poseur, I find myself warming to the i8. There's a cerebral quality to it that's missing from so many thud and blunder supercars. What are you really going to compare it with? Only Tesla's Model S really gets close and that's more of a luxury saloon.

The running costs of the BMW i8 are going to be tough to gauge. The quoted fuel economy figures - now quoted at 128.4mpg for the Coupe on the WLTP cycle - are clearly a nonsense, but it's not BMW's fault, instead being due to a shortcoming of the NEDC test which doesn't really cater for hybrid vehicles at all well. But how do you measure the economy in any case? After all, this is a vehicle you can plug in to an ordinary wall socket and charge to full capacity in less than four and a half hours (it charges from a BMW i Wallbox in under three). If you had a ten mile journey to work each day, you'd never put any fuel into it. Thanks to this improved model's updated 34Ah battery, it will cover up to 33 miles in all-electric mode. The emissions figure (quoted at 42g/km for the Coupe on the NEDC cycle) also means that you won't have to worry about buying road tax or, if you're lucky enough to get one on the firm, the benefit in kind taxation will be pleasantly low. Residual values are similarly tough to calculate. That's largely because this technology moves quickly. The i8 might be a jaw-dropping feat of engineering today, but in three or five years time, the game may have moved on. Working in its favour is that many owners of supercars just don't care. They want the latest and greatest and for many, the i8 is going to represent just that.

The BMW i8 remains an utterly fascinating vehicle. There's no doubt that this technology affords us a vision of the future. It certainly makes many of its more conventional rivals look positively quaint. Where the i8 is even more special is in the way that it normalises this brain-bending complexity. It's beautifully-finished and comes with a warranty just like any other BMW product. It doesn't impose itself on you. Yes, it's fearsomely fast in a straight line but the i8 is no B-road brawler. That model may well come and it will probably come from BMW, but here's something that's a bit more refined and looks set to change the way we think about this sort of high performance contender. You might not have ever believed that a car with a 1.5-litre three-cylinder engine could command a six-figure price tag. The i8 does that yet still seems a bargain. It's an incredible achievement.

Fill out the simple form below to get a quote for this BMW I8 COUPE lease.