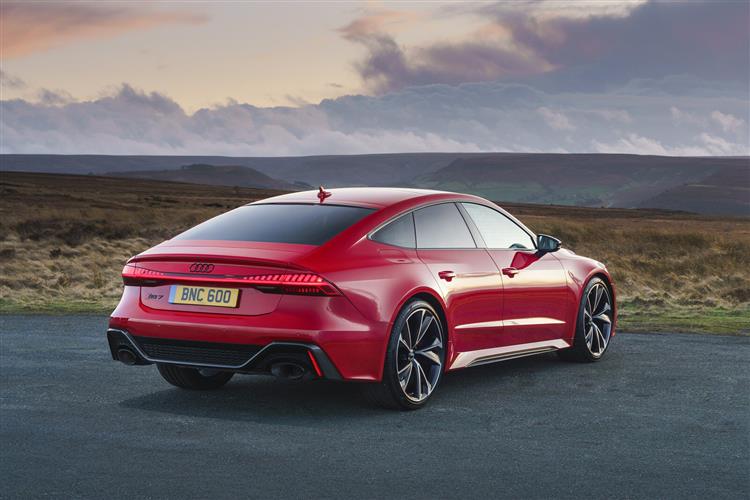 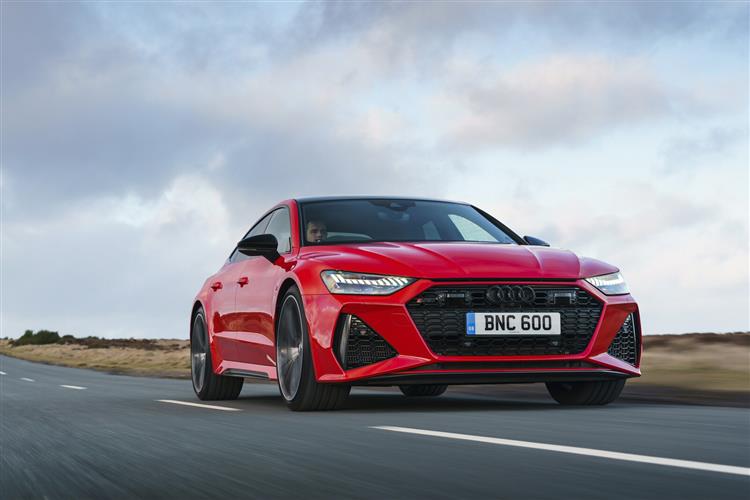 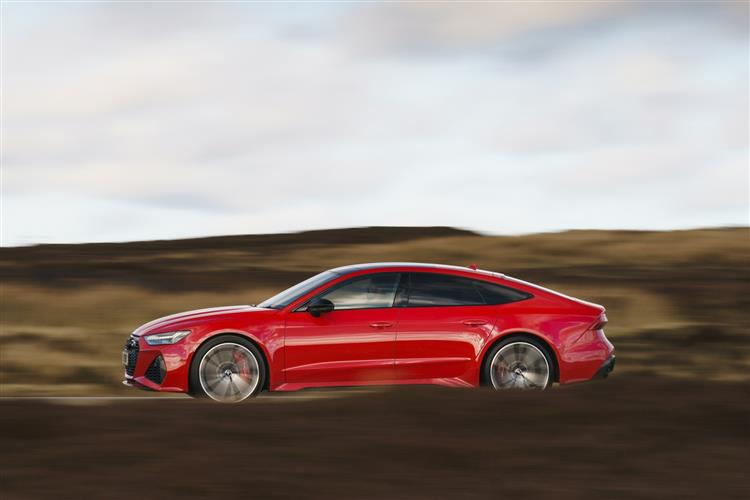 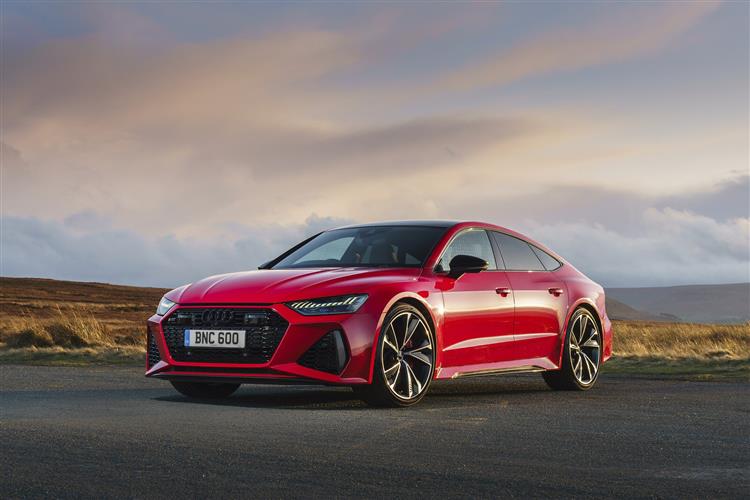 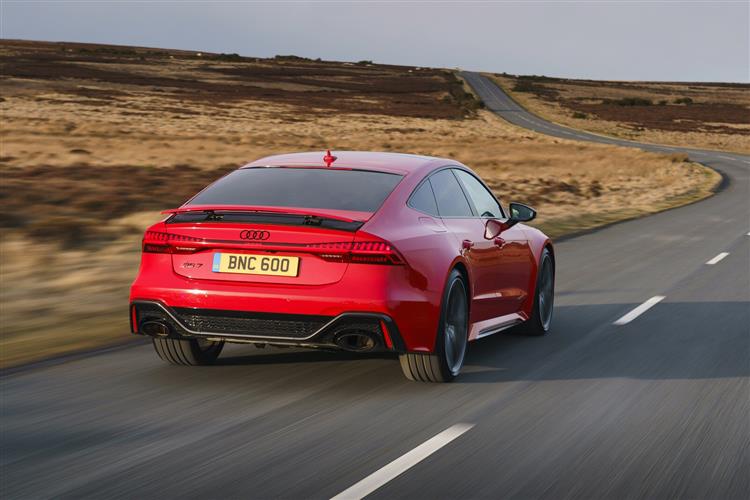 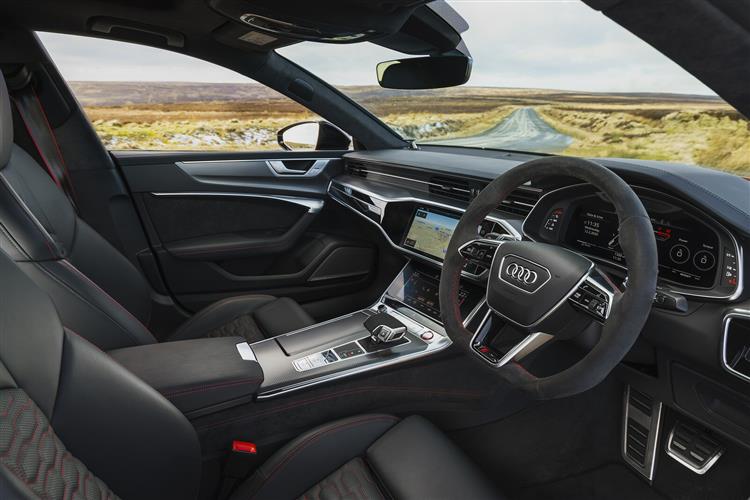 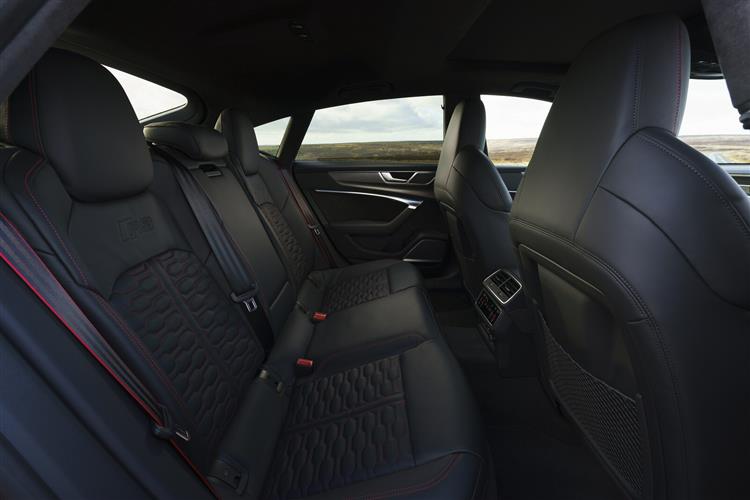 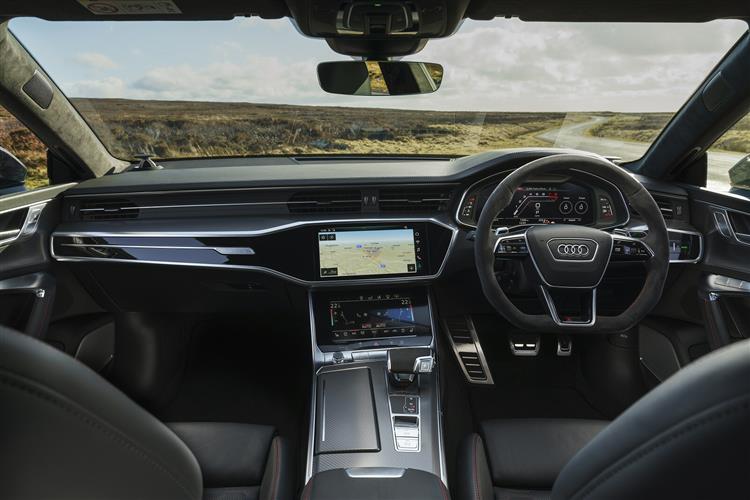 The second generation version of Audi's RS 7 Sportback delivers a massive 600PS engine and puts that power through all four wheels to scuttle from standstill to 62mph in just 3.6 seconds. You'll pay nearly £100,000 for the privilege but the accompanying soundtrack might well be the clincher: pure V8 muscle car.

You never quite know what you're going to get with an RS-badged Audi. Some are excellent, others merely make great autobahn expresses while a few are just head-scratchingly patchy in their array of talents. Just lately, however, Audi has been on a decent run. The current RS 4 is one of the better examples of its vintage and the current fourth generation RS6 is the best example of a big, fast Audi estate to date. Minded of this slightly hit and miss record, we were a little curious to see quite how this second generation RS 7 would turn out. Even up against the likes of the Porsche Panamera GTS, the Mercedes-Benz CLS 63 AMG and the BMW M8 Gran Coupe, this Audi appears to holds its own. The price stands up well and there's lots of new tech, including 48-volt mild hybrid electrical engineering for extra efficiency. And there's a new Launch Control system, plus wheel-selective torque control and a quattro sport differential that shifts drive torque between the rear wheels when cornering at speed. There's also a new five-link rear suspension design. Best of all, it's very fast. It's always reassuring to know that when you're spending this sort of money, you're buying something genuinely and demonstrably rapid.

Like its predecessor, this second generation RS 7 uses a 4.0-litre TFSI V8, but this time round it's provided from the outset with 600PS and gains 48-volt mild hybrid tech. Best of all, it remains a thoroughbred powerplant in terms of character and sound, as 62mph flashes by in just 3.6s on the way to an artificially limited 155mph maximum. The driver can influence those aural fireworks by adjusting settings for the sports exhaust, one of the configurable elements you can influence, then programme into the car's customisable RS1 and RS2 drive modes. All of this power's controlled via an eight-speed tiptronic auto transmission with optimised shift times and a Launch Control function. Through the turns, the quattro 4WD system's Torsen differential pushes 60% of drive to the rear axle in normal conditions, though at the slightest sign of slip, up to 70% of torque can go frontwards, or up to 80% to the rear, depending on what's needed. As with the previous generation model, there's also a sport differential to vary torque across the rear axle; and wheel-selective torque control to maximise traction through the turns. Which should be all you need to ruin the day of that supercar driver behind. To this recipe, for this MK2 model, Audi Sport has further added a Dynamic all-wheel steering system, via which the rear wheels are steered in the same direction as the fronts at high speeds for greater stability. And there's air suspension on an RS 7 for the first time, with the other key change being the adoption of a variable-ratio 'Progressive' steering rack, which gives more direct responses to larger steering angles. But there's still not the kind of feel you'd ideally really want when pressing on at speed through tight turns.

So what exactly is this RS 7? As the second recipient of the 48-volt version of the brand's twin-turbocharged 4.0-litre V8 (after the current RS 6), is this merely a version of that estate in a posh frock? Like its showroom counterpart, the RS 7 Sportback certainly looks perpetually ready to wield its sledgehammer performance - its sinewy body virtually hugs the road surface, and its sizeable wheels are shrouded by boldly flared arches that leave no margin for doubt about the mettle of this Audi Sport offering. Inside, there are grippy RS sport seats upholstered with perforated Valcona leather. And you're positioned comfortably in front of a perforated RS sport leather steering wheel with aluminium shift paddles and multifunction buttons, including the RS MODE button, which the driver can use to enable the drive select RS1 and RS2 modes. This automatically opens the RS-specific displays on the Audi virtual cockpit instrument binnacle screen. These provide details of tyre pressure, torque, performance, oil temperature, boost pressure, lap times, acceleration, and g-forces. More screens sit on the centre stack, and the driver can use the upper one to call up an RS monitor that gives an overview of drive system component temperatures, maximum g-forces and information regarding tyre pressures and temperatures. Unlike the previous generation RS 7, this one is provided with a three-seater rear bench in the interest of maximum versatility. When its split seat backs are folded down, up to 1,390-litres of luggage space can be made available, and when five adults are on board 535-litres remain at their disposal.

You'll need an £96,000 budget for this RS 7 Sportback - probably more like £100,000 once you've allowed for a few well chosen extras, so you're looking at a premium of around £30,000 over the already decidedly brisk S7 model. That's about the same as you'd pay for a rival BMW M850i Gran Coupe. Let's start with the outside. You get HD Matrix LED headlamps with the Audi laser light system and dynamic RS-specific turn signals; those dynamic turn signals also feature with the rear LED rear combination lamps. There are big 21-inch '10 spoke star' design alloy wheels with RS steel brakes and black brake calipers. Plus key engineering features include quattro four-wheel drive with a sports differential to vary torque across the rear axle; Dynamic all-wheel steering; and the Audi drive select driving modes system, complete with two customisable RS modes. The RS 7 interior does a decent job of justifying the car's pricing. The standard A7 feels genuinely special inside, with some beautiful design touches and real quality throughout. This gives the RS 7 a solid platform, which it builds on with Valcona leather heated and ventilated RS sports seats and expensive-looking aluminium detailing, with a flat bottomed Audi Sport steering wheel featuring powered adjustment and aluminium gearshift paddles. There's also stainless steel pedals, RS illuminated door sill trims and Audi Sport logo projection onto the ground when you open the doors at night. Finishing touches include a multi-coloured Extended LED Interior Lighting pack, a black cloth headliner and leatherette.

There aren't too many options that you'll feel overly compelled to plump for, so you won't need to worry unduly about inflating the list price. Still, this remains an expensive car with a big petrol engine and that's usually a guarantee of scary residuals. The fact that it'll be likely to shed 40 per cent of its value over three years is just something that owners will have to accept with their eyes open at the time of purchase. It's certainly no worse than any of its key rivals. On other measure, the RS7 is actually remarkably good for a car with this power output and which weighs in at nearly two tonnes. A 23.2mpg combined fuel economy figure is far from catastrophic, although it will be tough to resist putting the turbos to work in earnest. In day to day motoring, you'd be pleased to break 20mpg. The carbon dioxide emissions best of 278g/km might also be something you could live with. It's certainly no worse than you'd get from, say, a Porsche Panamera GTS or a Mercedes-AMG CLS 63 4MATIC+.

The Audi RS 7 offers all the grip, composure and sheer brawn most will ever need. If you were looking for the last word in driver involvement, you may find it a little aloof, but then buyers of this class of car tend to realise that they're exercises in compromise, albeit artfully designed ones. It's not short of charisma and it makes all the right numbers but is there an x factor to this car that's present in the very best RS products from Ingolstadt? An x factor that's there in its sister car, the RS 6 Avant? That will likely be for you to decide, as these things are intensely personal. Audi has clearly gone about this car in a very correct manner. Some may see the RS 7's automatic gearbox as a less focused driver choice than the twin-clutch S-tronic transmission that's fitted to the S7, but to drive it is to realise the genius in the eight-speed auto's logic and execution. All the constituent ingredients seem to have been assembled but whether they hang together cohesively is a question that doesn't always disappear. Over to you.

Fill out the simple form below to get a quote for this Audi Rs 7 Sportback Rs 7 Tfsi Quattro Vorsprung 5dr Tiptronic lease.