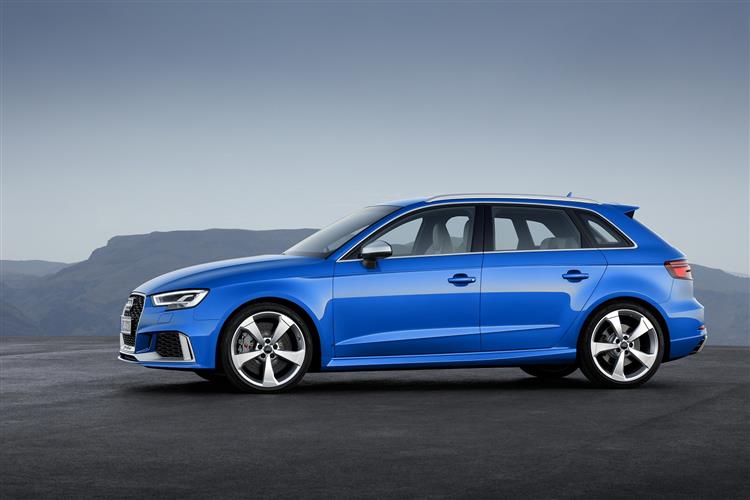 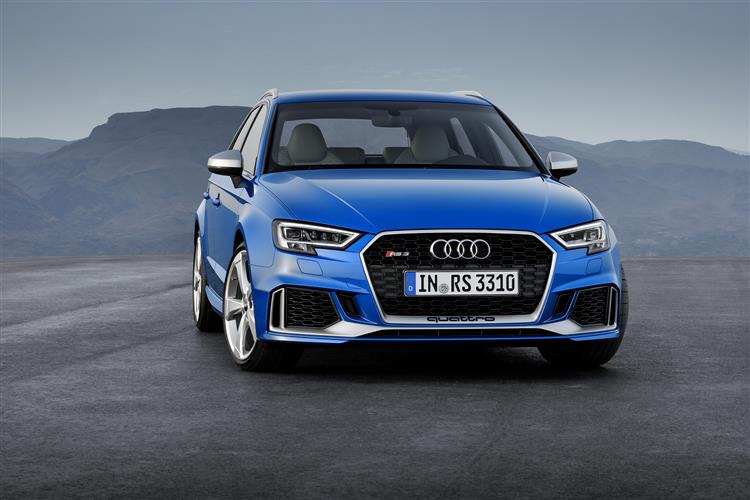 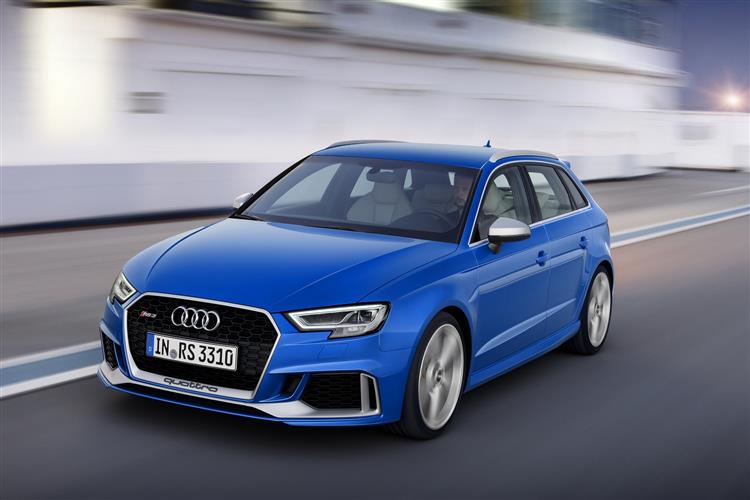 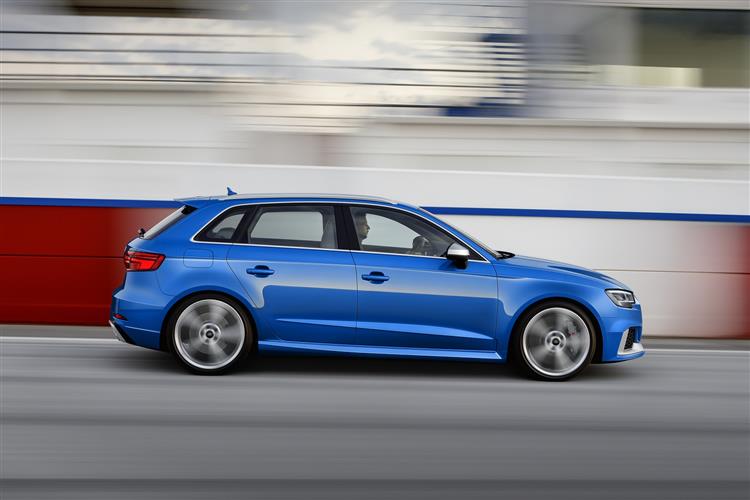 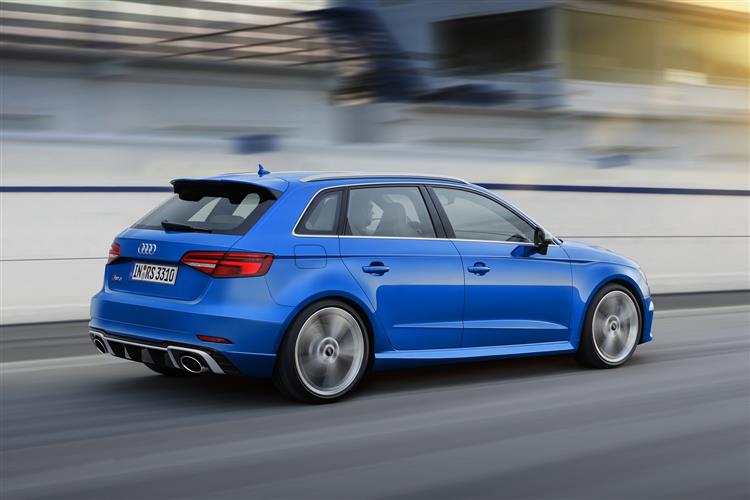 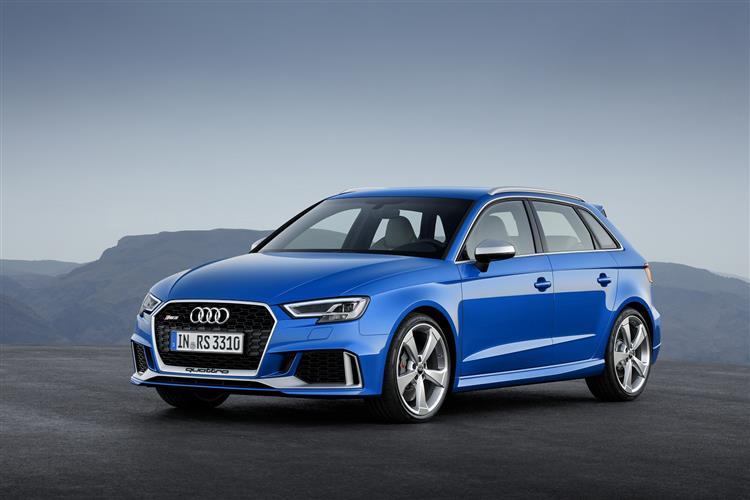 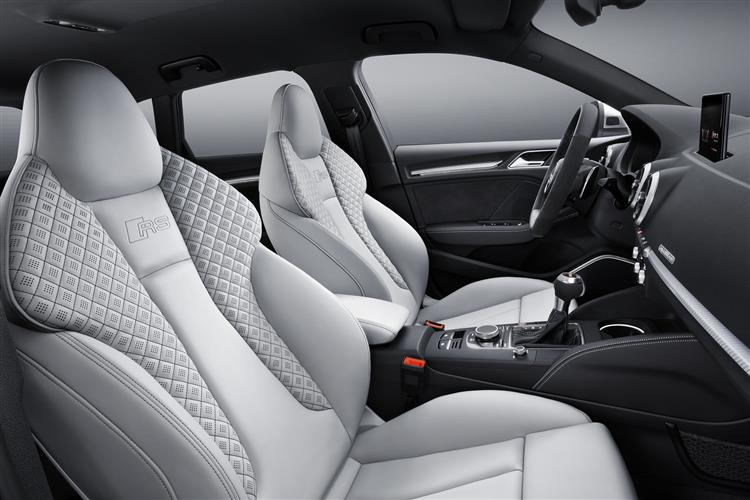 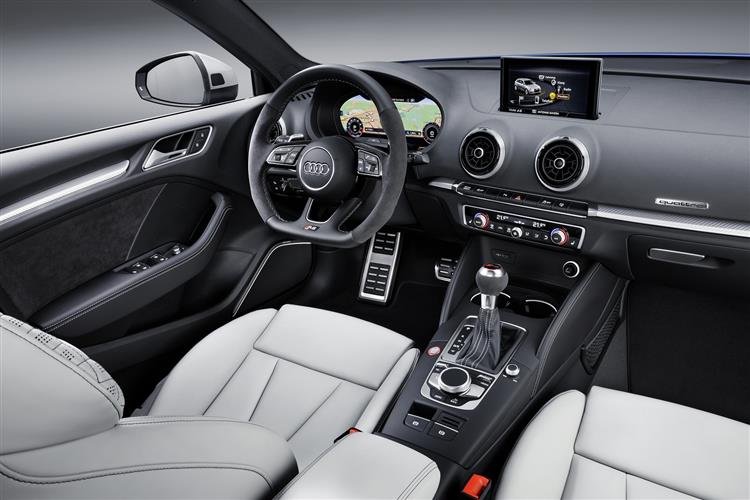 We thought the last Audi RS 3 Sportback with 367PS was fast enough, but this latest 400PS version sets a fresh benchmark. Add in a talented chassis with a wider track and a clever all-wheel drive system and stand well back. This one's explosive.

When dealing with the Audi RS 3 Sportback, a little context pays dividends. You see, this uber-hot hatch now fronts up with 400PS. In case you were wondering, that's more than the amount developed by a twelve-cylinder Ferrari Testarossa, and more than the first Porsche 911 GT3. So, yes, it's got some real brawn about it. This is the third time we've seen an RS 3. The first one was a 340PS monster introduced in 2010, eventually eplaced by a 367PS model in 2014. In many ways, the formula of this latest 400PS car hasn't differed much. There's still a 2.5-litre five-cylinder turbocharged engine driving all four wheels. It's just that now you get a bit more of everything. More is better, right?

Audi makes great play of the fact that this 400PS RS 3 Sportback has shaved some 26kg off the weight of its 367PS predecessor, which coupled with the power increase, significantly improves its power to weight ratio, making it better than cars like, say, the Lotus Exige S or a V8 BMW M5. More than a Porsche 911 Carrera or a Mercedes SLC 43 AMG too. Now you see quite what sort of company the RS 3 Sportback can mix it in. With the benefit of all-wheel drive, it'll scuttle to 62mph in just 4.1 seconds (0.2s quicker than before) and run onto a restricted maximum of 155mph, although this can be derestricted to 174mph if you pay extra for the 'dynamic package plus'. A light multi-plate clutch mounted at the rear axle has the ability to transfer between 50 and 100 per cent of power to the rear wheels. Audi even reckons that on slippery surfaces, this thing will drift like a rear-driver. As for the engine, well it's much the same 2.5-litre five cylinder TFSI turbo unit that was used previously and is closely related to the powerplant found in the current TT RS. It puts out 480Nm of torque (15Nm more than before) and transmits it all to the tarmac via a seven-speed S tronic twin-clutch transmission and, of course, quattro all-wheel-drive. Maximum torque is readily available across a broad plateau, which means that you'll rarely be caught off boost. A widened track, bigger brakes and tyres, retuned ESP stability control and a sharpened suspension setup lowered by 25mm distinguish the RS 3 from a standard Sportback.

Subtle styling revisions based on the recent updates made across the A3 range lift this look of this ultimate variant. The Singleframe grille with its gloss black honeycomb mesh and the large air inlets and angular sill trims which flank it are now also complemented by a redesigned blade in the bumper which serves to make the car appear even more broad-shouldered. Those in the know will spot the aluminium mirror housings, side skirts, rear diffuser and the hunkered down stance. Yes, there are 19-inch alloy wheels and burbling exhausts but the RS 3 doesn't wear the sort of wings, monster wheel arch bulges and grille-pocked bonnets that appear on most fast hatchbacks. In that regard it's relatively low key. At the wheel, a flat-bottomed steering wheel looks suitably racy and makes getting in and out that little bit easier. Customers choose between black and grey colour schemes, and there are leather sports seats although the optional diamond-pattern 'S' seats will be popular. We suspect many buyers will go the whole hog and put the deep RS carbon-shelled bucket seats, saving themselves 7kg on each seat and lightening their bank accounts accordingly. The standard Sportback is a good-looking platform to build from and the RS 3 looks resolved in a way that few range-topping sports variants manage. Like all Sportbacks, the RS 3 enjoys wide opening rear doors which mean easy accessibility into a cabin where space is reasonable - two adults can ride comfortably in the back - and there's a 340-litre boot, with a total of 1,185-litres of space when the rear seats are folded flat. This time round, Ingolstadt is also offering the option of a saloon bodystyle too.

The real driver for the appearance of this model has been the upgraded 381bhp Mercedes-AMG A45. The bombshell baby Benz also features four-wheel drive and managed to make the RS 3 seem ever so slightly limp wristed, so Audi have answered back with a model that one-ups the car with the three-pointed star. As expected, pricing closely mirrors that of the Mercedes, so buyers will need a budget of just over £45,000. Standard equipment includes xenon headlights and subtly flared, lightweight front wings, while inside there are Nappa leather trimmed sports seats, and a Driver's Information System which displays boost pressure and oil temperature and doubles as a lap timer. Acoustic rear parking sensors, electronic climate control and DVD-based satellite navigation with MMI (Multi Media Interface) functionality are also fitted. For the first time on an RS 3, the fully digital Audi 'Virtual Cockpit' instrument binnacle is available. The Audi Smartphone Interface is now standard, enabling users to access selected apps on their handsets from the car's onboard monitor via Apple Car Play and Android Auto, and an LTE module brings the Audi connect services on board, including navigation with Google Earth and Google Street View. A carbon ceramic brake package appears on the options list.

Despite a power output that was well into supercar territory not so very long ago, the Audi RS 3 Sportback turns in a very creditable performance at the pumps. Or it would if you didn't spend most of your time with the loud pedal buried in the carpet. Audi quotes a figure of 34.0mpg and emissions of 189g/km, which are about the same as the readings of the old 367PS model and a significant improvement on the 2010 vintage RS3 Sportback, which recorded 31mpg and 212g/km. A start-stop system and energy recuperation system along with a redesigned oil pump has helped improve efficiency and at the same time earn the car a Euro6 compliance stamp. As the previous model demonstrated, the RS 3's cachet will keep residual values sturdy in the short term at least but expensive options such as the carbon ceramic brakes will cause a softening in percentage values come resale time. Insurance isn't going to be cheap either with a Group 50 valuation resulting in some chunky-looking premiums.

If there was one thing the original 2010-era Audi RS 3 Sportback demonstrated very vividly, it was that you didn't need an impractical shape, a huge thirst and iffy reliability to deliver supercar-style performance. It just delivered in an incredibly effective, no-nonsense way. Some liked this. Others tried it and thought the RS 3 made the act of going very fast rather aloof, requiring licence-losing numbers on the speedometer before it felt it was doing something other than going through the motions. Audi has thought long and hard about this and wth the 367PS 2014-era model, set about delivering more soul, involvement and emotion for RS 3 buyers, a process continued with the introduction of this pokier 400PS version. Ingolstadt's finest have worked at delivering a stirring soundtrack and a playful chassis and haven't been able to resist turning the wick up still further on performance. Then there are the things that haven't changed; its all-weather ability, its everyday practicality and its relatively tasteful discretion. One thing is not up for debate. Audi will have zero problems selling every last car that its UK importers can get their hands on.

Fill out the simple form below to get a quote for this Audi Rs 3 Sportback Rs 3 Tfsi 400 Quattro 5dr S Tronic lease.