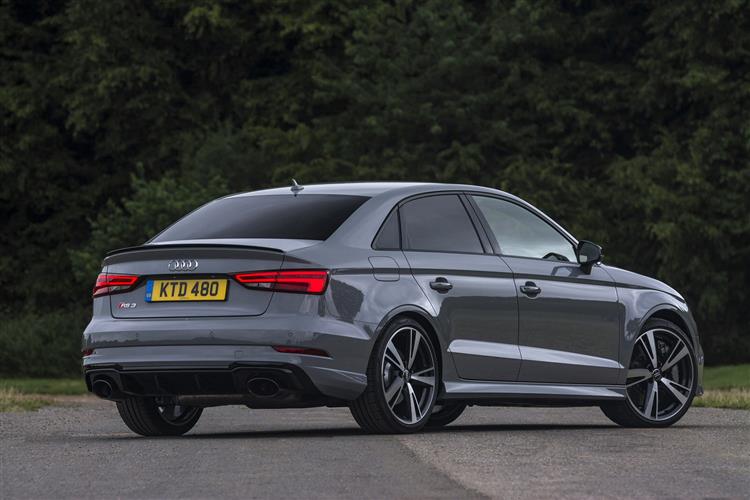 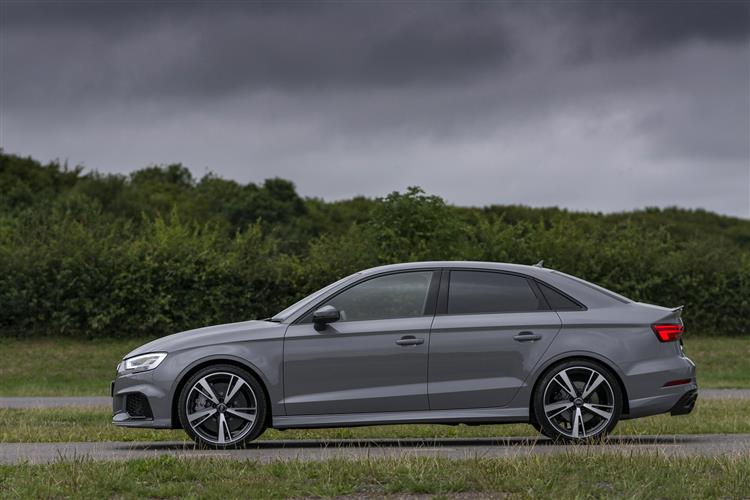 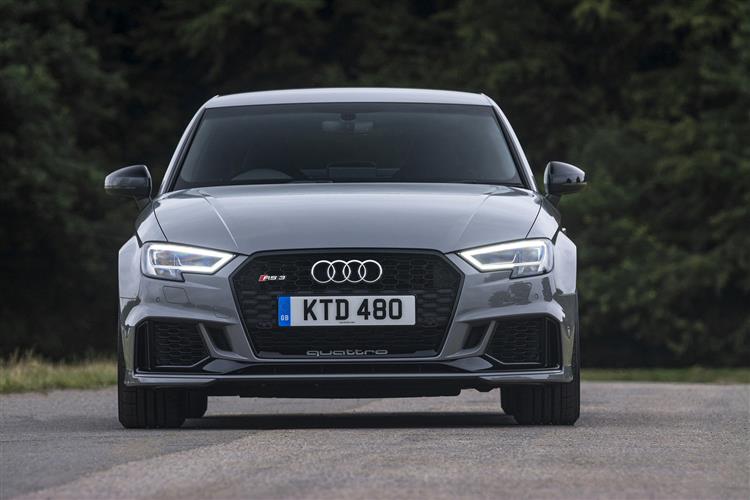 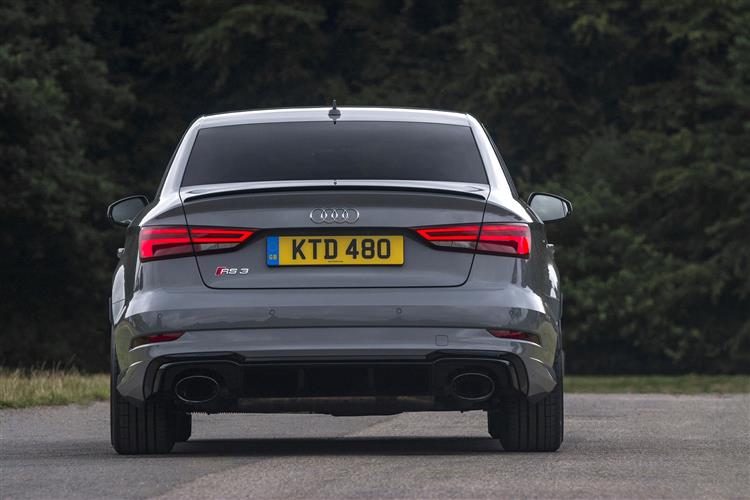 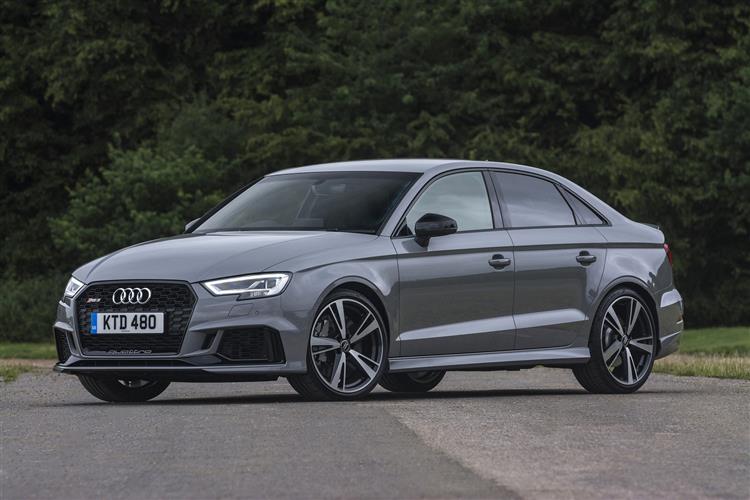 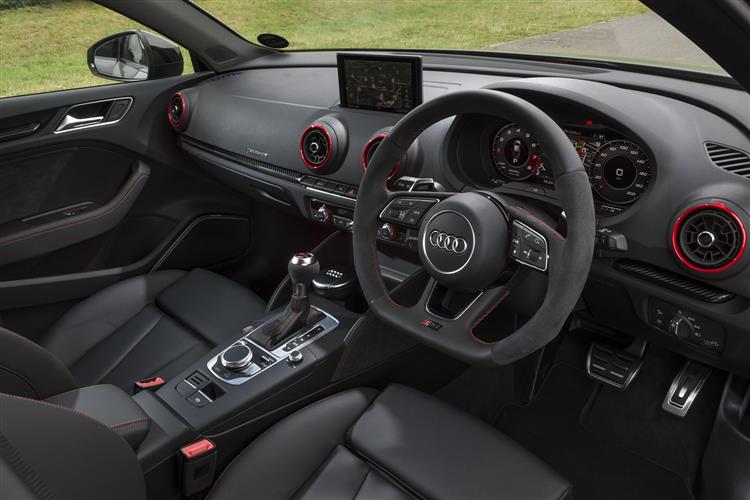 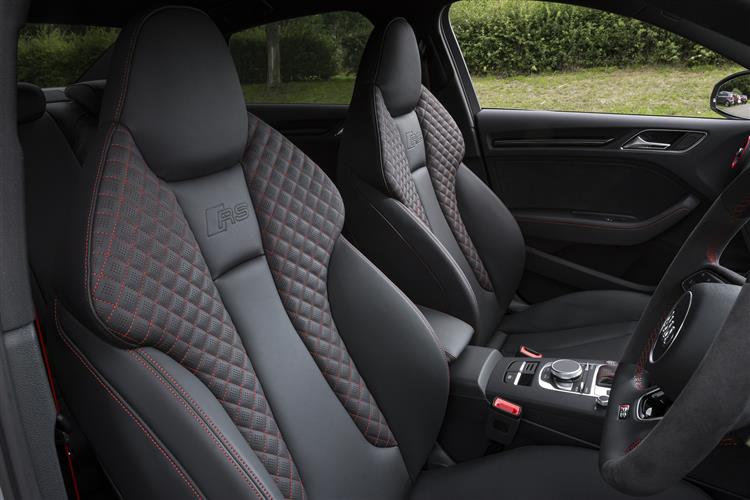 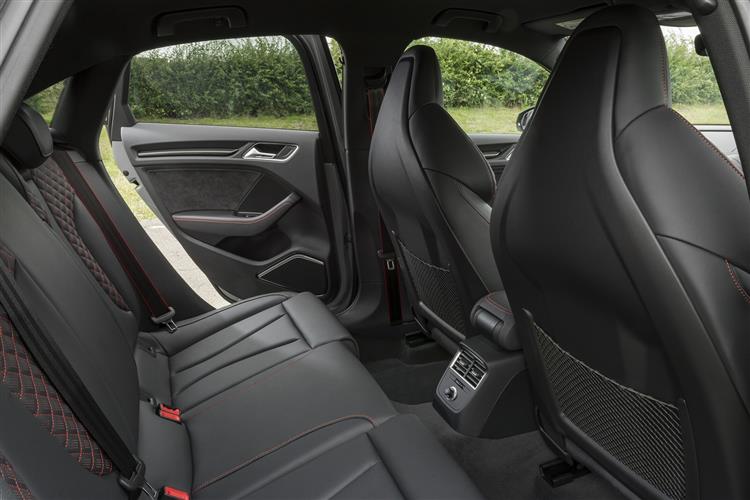 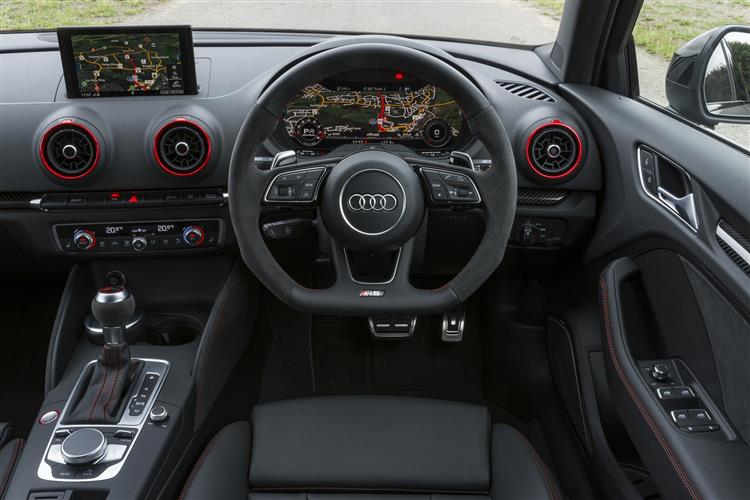 The first Audi RS saloon since 2010 features the world's most powerful five-cylinder engine, rated at 400PS. This RS 3 Saloon is very subtle and very, very quick.

We're used to sharp-suited super-fast RS-badged Audi sports saloons - but we've never seen one based on the A3. The brand has long offered us the four-door S3 of course, a car that now puts out 310PS, but enthusiasts wanting something even faster in a three-box bodyshape have had to wait until the launch of this RS 3 Saloon to get Ingolstadt's ultimate compact super-sedan. In creating this variant, the company has taken the opportunity to include all the features lately added to the standard A3 range - which primarily means extra media connectivity options and the extra cost Virtual Cockpit instrument display. There's still a 2.5-litre five-cylinder turbocharged engine driving all four wheels but now you get a power boost to 400PS. More is better, right?

This 400PS, 174mph RS 3 makes history as the first saloon in the brand's history to use a transversely mounted configuration for its evocative powerplant. The 2.5 TFSI unit delivers 400PS and 480 Nm of torque. Such firepower allows the this compact RS model to sprint from 0 to 62 mph in just 4.1 seconds. It can attain a maximum speed of 155mph and, upon request, Audi will increase the electronically limited top speed to 174mph. The unique sound of the five-cylinder unit intensifies an already emotionally charged driving experience originating from the ignition alternating between directly adjacent cylinders and widely spaced ones. The sound can be modified via the standard 'Audi drive select' drive dynamics system. With its light-alloy crankcase, the five-cylinder engine is 26 kilograms lighter than before. It employs a dual injection into the intake manifold and into the combustion chambers, as well as the Audi valvelift system for variable control of the exhaust valves. Maximum torque is readily available across a broad plateau, which means that you'll rarely be caught off boost. A widened track, bigger brakes and tyres, retuned ESP stability control and a sharpened suspension setup lowered by 25mm distinguish the RS3 from a standard A3 Saloon.

The great thing about Audi RS models is that despite packing a punch that would make Iron Mike appear a bit of a powder puff, they're not ludicrously overt. Those in the know will spot the aluminium mirror housings, side skirts, rear diffuser and the hunkered down stance. Yes, there are 19-inch alloy wheels and burbling exhausts but the RS3 doesn't wear the sort of wings, monster wheel arch bulges and grille-pocked bonnets that appear on most fast saloons. In that regard it's relatively low key. Compared with an A3, the front track of the RS 3 Saloon is wider by 20 millimetres - the front wheel arches are accordingly flared wider as well. At the rear axle the wheels are spaced 14 millimetres further apart compared with the standard model. A fixed spoiler lip on the luggage compartment lid improves the separation of air flow. A distinctive diffuser insert with vertical struts and the large oval tailpipes of the RS exhaust system terminate the rear. The dark-toned interior welcomes the driver and passengers with illuminated door sills bearing the RS 3 logos and black fine Nappa leather sport seats with RS logos on the backrests are standard. Optionally available are more contoured RS sport seats with integrated head restraints.

You'll need to budget the best part of £45,000 for this RS 3 Saloon. That's a fraction less than you'll have to find for the RS 3 Sportback five-door hatch and about the same money that Mercedes is asking for what is probably this car's closest competitor, the 381bhp Mercedes-AMG CLA 45 4MATIC. Black fine Nappa leather sport seats with RS logos on the backrests are standard in this RS 3. Optionally available are more contoured RS sport seats with integrated head restraints, their covers being diamond patterned and colour-perforated. The standard RS sport leather steering wheel is flattened at the bottom. As standard, a seven-inch electrically extending MMI screen is fitted and you can add to it the various services of Audi connect, including navigation with Google Earth and Google Street View, as well as information on fuel prices, the weather, travel and traffic. The information is displayed directly in the MMI, and operation is by way of the standard-equipped RS multifunction steering wheel, the rotary/push-button control and touchpad or by spoken command. The two circular instrument binnacle dials are black with red needles and white scales. Or you can specify the fully digital Audi virtual cockpit with its high-resolution 12.3-inch monitor that allows the driver to choose between three display modes. They include a special RS screen that moves the tachometer to the centre. On the left and right information appears on tyre pressure, torque and g-forces. When the transmission is operating in manual mode, a scale with a colour background prompts the driver to use the steering wheel paddle or selector lever to upshift when approaching maximum revs.

Despite a power output that was well into supercar territory not so very long ago, the Audi RS 3 Saloon turns in a very creditable performance at the pumps. Or it will as long as you don't spend most of your time with the loud pedal buried in the carpet. Don't expect its quoted running cost figures to differ very much from those of the previous RS 3 Sportback model, which was rated at around 35mpg on the combined cycle, with emissions of around 190g/km. A start-stop system and energy recuperation system along with a hi-tech oil pump improves efficiency and at the same time earns the car a Euro6 compliance stamp. As the previous hatch models have demonstrated, the RS3's cachet will keep residual values sturdy in the short term at least but expensive options such as the carbon ceramic brakes will cause a softening in percentage values come resale time. Insurance isn't going to be cheap either with a Group 50 valuation resulting in some chunky-looking premiums.

If there was one thing that previous Audi RS3 models have demonstrated very vividly, it's been that you don't need an impractical shape, a huge thirst and iffy reliability to deliver supercar-style performance. Like its hatch predecessors, this Saloon model delivers all of this in an incredibly effective, no-nonsense way. Buyers will like this car's all-weather ability, its everyday practicality and its relatively tasteful discretion. And the cachet that goes with owning a car powered by the world's most potent five cylinder engine will probably ensure that Audi will sell every one of these that they can get their hands on.

Fill out the simple form below to get a quote for this Audi Rs 3 Saloon Rs 3 Tfsi 400 Quattro Audi Sport Ed 4dr S Tronic lease.