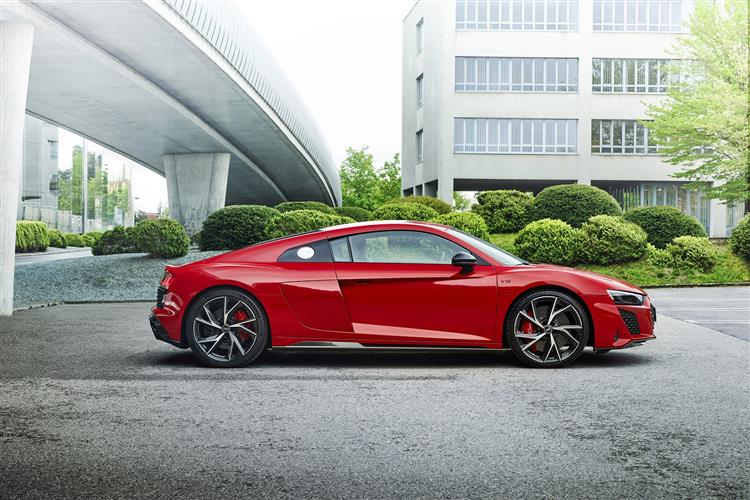 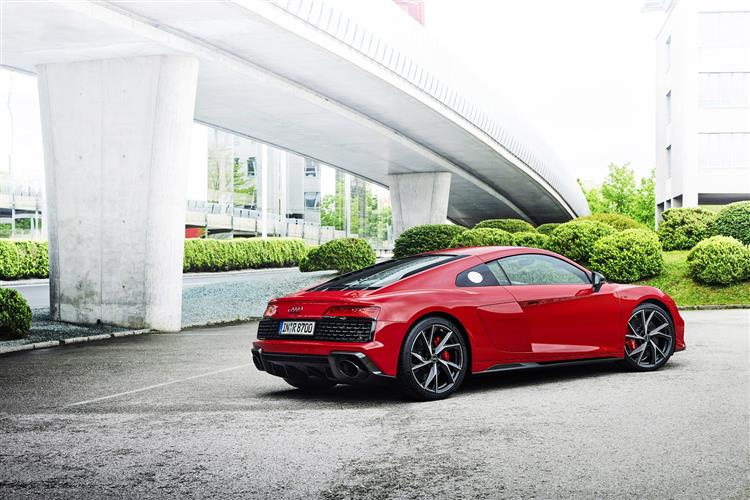 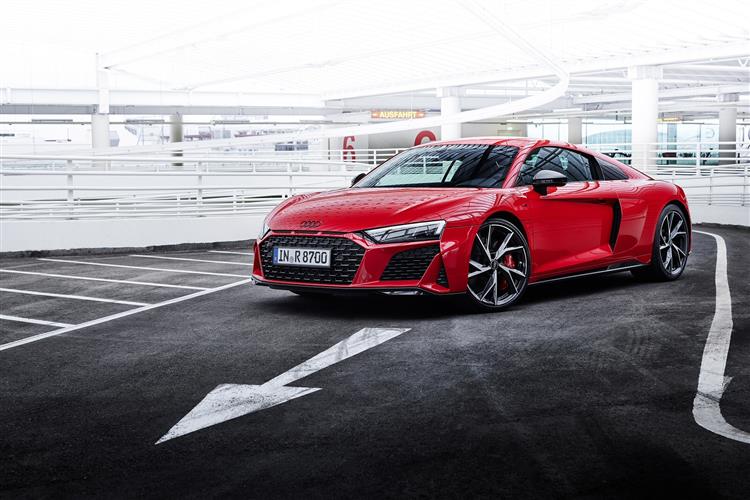 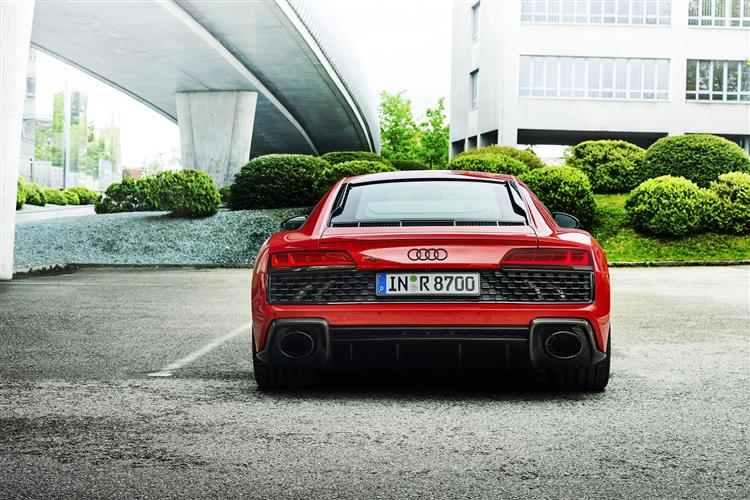 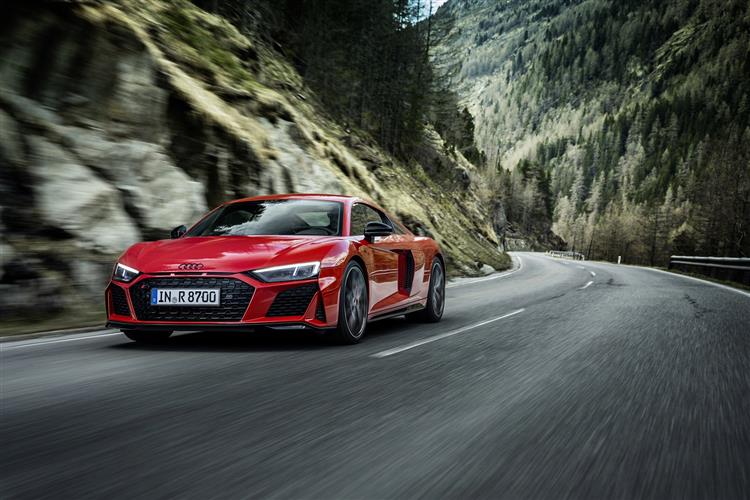 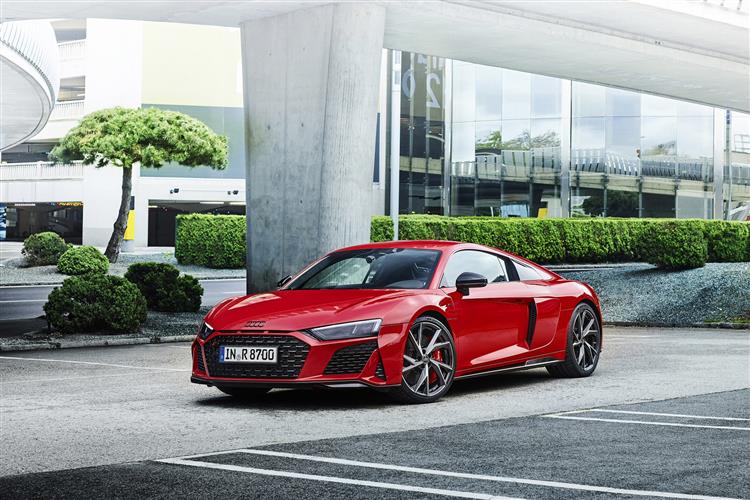 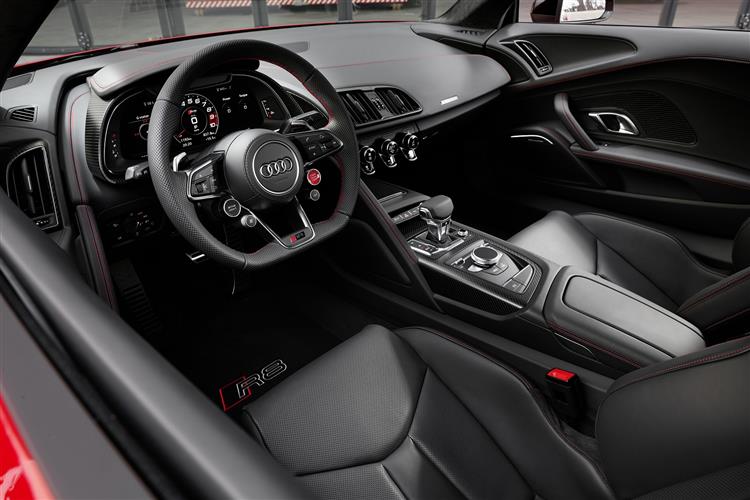 The second generation Audi R8 has become fiercer and more focused in recent times, with its V10 petrol engine providing near supercar levels of performance. Buyers choose between rear wheel drive and quattro 4WD versions of the single 570PS 'Performance' level of powerplant tune, with both capable of topping 200mph. As ever with an R8, you can have either a Coupe or an open-topped Spyder version. Either way, this car remains deeply desirable.

Models like the Audi R8 don't come about very often. By that we mean sports cars that redefine what you think a vehicle manufacturer is capable of. In living memory, Audi has probably had two: the original all-wheel drive Quattro and the R8. I guess a case could be made for the excellent V8-engined RS4, but it didn't break the mould in any particular regard. It's hard to believe that the R8 was launched in 2006, a year Porsche got a double-whammy from both Audi - and Nissan's magnificent GT-R. The R8 had a light refresh back in Spring 2012, when it got a better automatic gearbox, an more powerful V10 Plus version and a very subtle restyle, but that was just a means to see the MK1 design through the last couple of years of its life. In its place in 2015, we got this second-generation R8 model, then usefully improved in 2019. A rear-driven model was introduced in 2021, which brings us up to date.

There's now only one 570PS version of the gloriously melodic V10 engine available in this R8, which as usual comes mated to 7-speed S tronic auto transmission. Here's a car that in Coupe form is capable of 62mph from rest in just 3.4s en route to 201mph. Stopping power is equally ferocious, thanks to the ceramic brakes that come with standard 'Performance' spec. There's a rear-driven version that track fiends can drift in, but unlike some of its rivals, the R8 also offers 4WD, a quattro set-up able to flash 100% of power to either axle instantly on demand and as a result, traction levels are astonishingly high. The car feels agile too, aided by a torque vectoring system, though a slight vagueness in the steering to some extent masks small recent improvements made to the suspension and the steering. As usual with Audi, there's a 'drive select' driving dynamics system so that you can tweak throttle response, steering, stability control thresholds and gearshift timings to suit the kind of progress you want to make. It includes a special 'performance' mode, with graphics delivered via the customisable screen of the brilliant 'Audi Virtual Cockpit' display that replaces conventional instrument dials. The 'drive select' set-up can control the suspension too if, as we'd suggest, you find the extra for the 'Audi Magnetic Ride' system. On commuting journeys, there's a level of urban manoeuvrability that belies the relatively low seating position and this second generation design's considerable width. All from a super sports model that must still, when called upon, be able to deliver brutal performance, tremendous traction and astonishing agility.

Visually, the R8 remains much as it always was, a distinctive cocktail of low-slung curves and delightful design extravagance, though the arrival of this 'Type 4S' second generation design in 2015 saw the influential shape of the previous MK1 'Type 42'-series model expressed in a tauter, more technically precise way. As before, we're talking Ferrari, but with a German twist. Whether you think Audi should have more fundamentally changed the appearance of this car over the years comes down to personal perspective. Aesthetic continuity certainly hasn't done Porsche's 911 any harm over the last half a century. This model doesn't have that one's understated elegance, but whether you choose this Coupe body style or the Spyder convertible, it looks appropriately exotic and exclusive - just as a six-figure supercar should. Once inside, you're introduced to what Audi calls a 'luxury-level racing atmosphere'. As usual with any R8, one of the cockpit's key distinguishing features is what the stylists call the 'monoposto', a stylised large arc that encircles the driver's area of the cockpit, starting in the door and ending at the centre tunnel. Another distinctive touch lies with Ingolstadt's decision to dispense with a conventional centre-dash screen and package all the infotainment functionality into this 12.3-inch 'Virtual Cockpit' instrument binnacle display that completely replaces the usual set of conventional dials. What else? Well the driving position's almost faultless, positioning you a little higher than you usually would be in a mid-engined super sports car. And you enjoy particularly supportive Nappa Leather-trimmed bucket seats. And beyond that? Well, were we to be graduating into this car from a 911, we'd miss the little rear seats that Porsche give you there, so useful for chucking a jacket or a designer shopping bag on to. Audi has tried to compensate by providing a 226-litre space behind the seats that it claims is large enough to accommodate a golf bag. Hmm. It'd have to be a fairly small one. The optional 'Storage pack' gives you these useful nets behind these seats. You're certainly not going to fit anything like a golf bag in the boot. Given that huge engine display cabinet out-back, the luggage bay, as in a 911, is in the front. At 112-litres in size, it isn't very big at all.

Lasers. You got them here first. As standard, the R8 comes with an all-LED headlight pack, but laser spots can be optioned onto the R8. Go for the V10 performance version and they're fitted as standard. The rear LED tail lamps are slick too, with a scrolling function in the intended turn direction. Clearly all this comes at a price and in case you're curious as to what that is, you might want to take a seat. The entry-level RWD coupe model costs around £127,000, while the V10 performance quattro 4WD version will need a budget of around £147,000. You can pay £11,000 more for plusher 'Edition' trim in each case. If you want the open-topped spyder body style, you're looking at a premium of around £8,000 over the coupe, with the same engines, drivetrains and trim levels available. The generous specification of all standard variants includes 19-inch twin-spoke forged alloy wheels finished in matt titanium, a gloss black styling pack, R8 sports seats with fine Nappa leather, a flat-bottomed steering wheel, a 12.3-inch Virtual Cockpit instrument screen, the 'Audi phone Box' wireless charging mat and a sideblades either side finished in bodycolour. 'Edition'-trimmed models bring an extra layer of exclusivity. Additional equipment includes upgraded 20-inch cast aluminium alloy wheels in bronze, fine Nappa leather with diamond contrast stitching, carbon sideblades, black Audi rings and mirrors, a Bang & Olufsen stereo with loudspeakers in head restraints and red brake callipers. Performance quattro Edition models also benefit from upgraded carbon-ceramic brakes. Further visual impact can also be applied with the addition of the 'Carbon Pack', which is exclusively available for 'Edition' models. Priced at £9,000, it adds a gloss carbon fibre front splitter, side sills, rear diffuser, mirrors and engine cover, while the interior also benefits from carbon fibre door sills, inlays and centre console.

The R8 may well be the sensible mid-engined supercar but don't let that lull you into the false belief that it'll be cheap to run. Still, Audi has done its best. The V10 FSI powerplant comes with direct and indirect injection and Cylinder on Demand technology linked to a hi-tech start-stop system that'll cut the engine when you don't need it, stuck in traffic or waiting at the lights. Then there's the Multimaterial Audi Space Frame construction that helps to reduce weight by up to 50kg. As a result, even the V10 performance quattro variant manages 21.9mpg on the combined cycle and 293g/km of CO2. The rear-driven version improves that to 22.2mpg and 288g/km. Keeping the basic look much the same will protect residual values of previous R8 models. We're slightly disappointed by the three year 60,000 warranty though, particularly given that the mechanically-identical (and supposedly more temperamental) Lamborghini Huracan comes with a four year unlimited mileage package. The three year deal you get with equivalent McLaren and Porsche models is also unlimited mileage too. As an option, your Audi Centre will sell you a four year 75,000 mile warranty package; or one lasting for five years and 90,000 miles.

The appeal of this 'Type 4S' second generation R8 has a lot to do with its engine, so it's just as well for Audi that the 5.2-litre V10 is such a glorious powerplant. It reminds you that normal aspiration produces a level of aural entertainment that a turbo unit can never quite match. We'll miss it when it finally disappears. Ingolstadt has clearly benchmarked key competitors and blended Latin exclusivity with Teutonic day-to-day usability, creating a finished product that's difficult to beat if you want a car of this kind you could drive every day. It's a very Audi supercar. And there's nothing quite like it.

Fill out the simple form below to get a quote for this Audi R8 Spyder 5.2 Fsi V10 Quattro Perform Carbon Bk 2dr S Tronic lease.