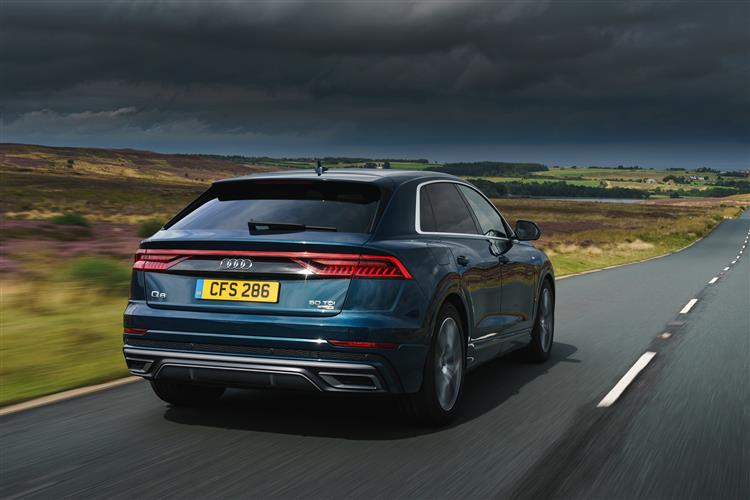 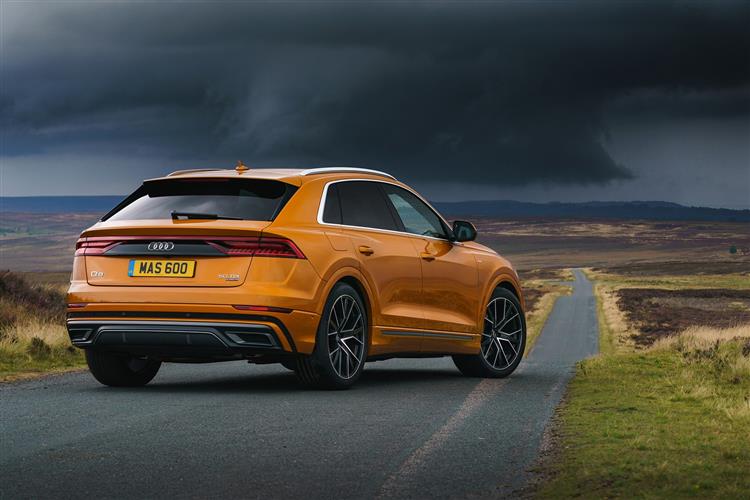 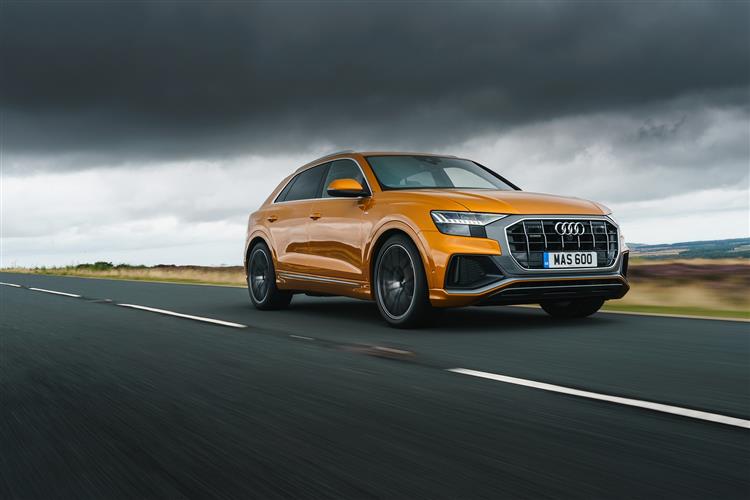 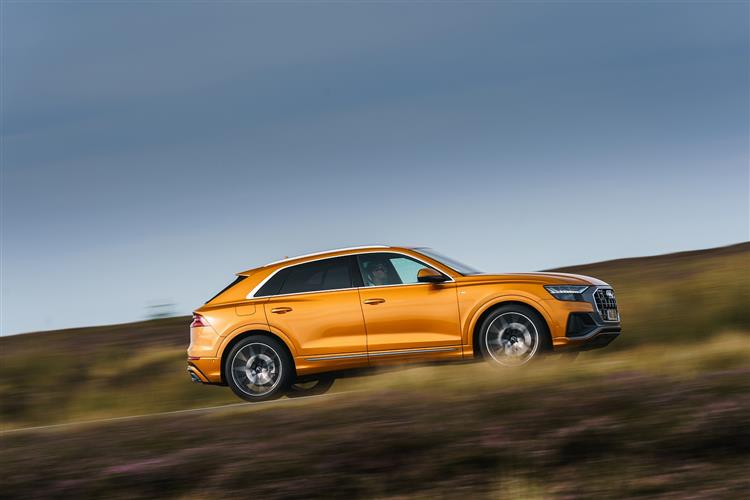 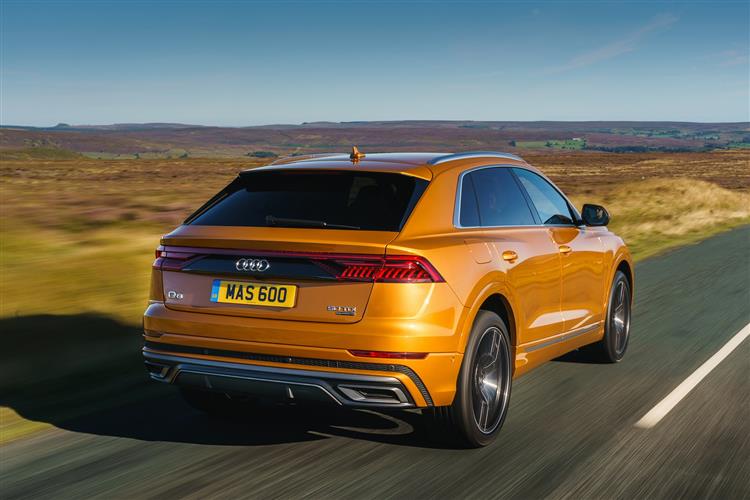 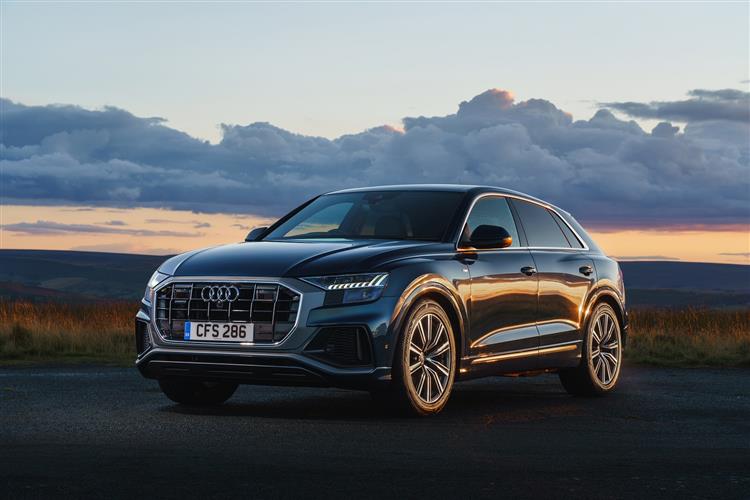 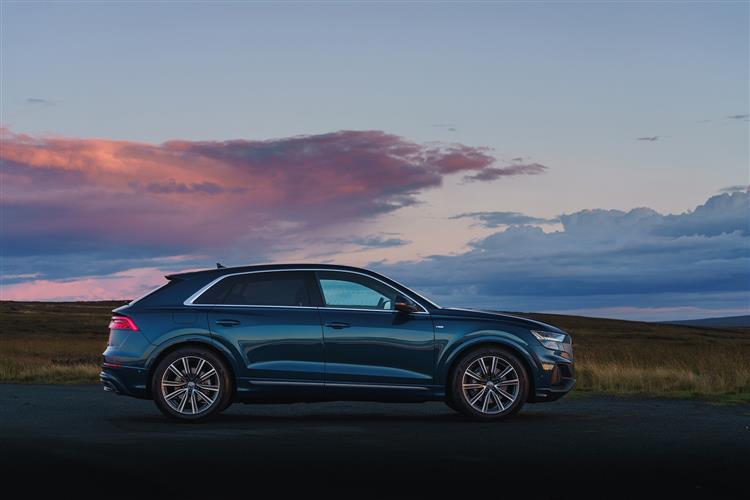 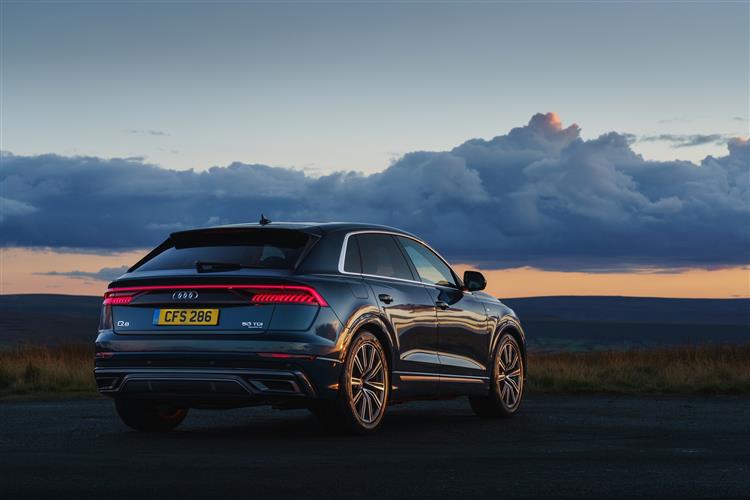 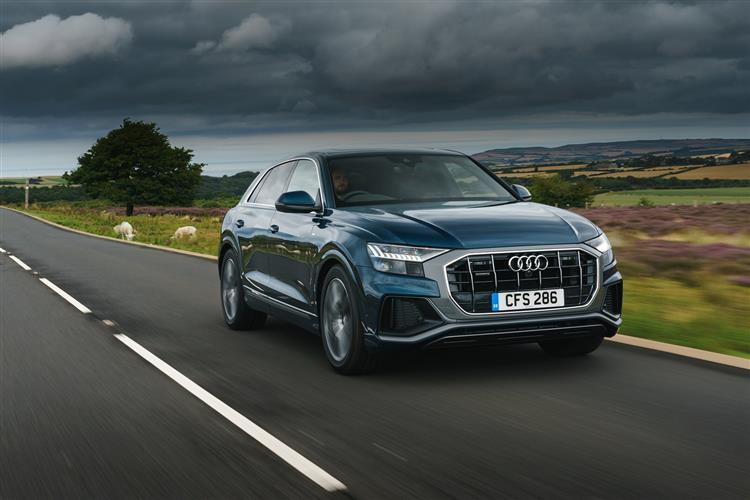 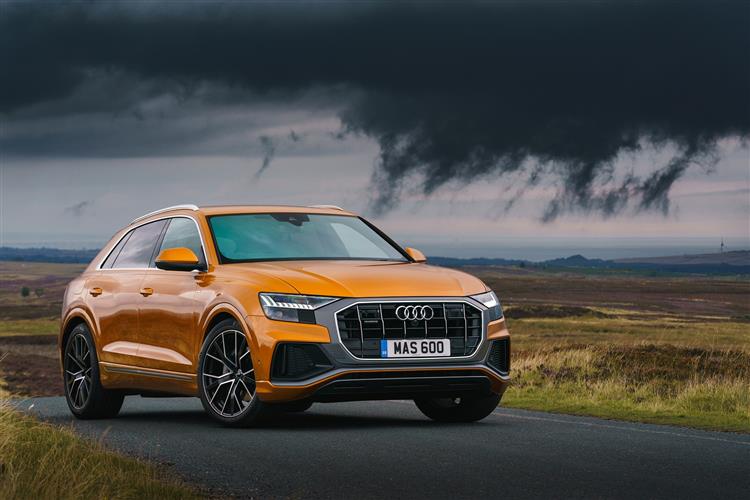 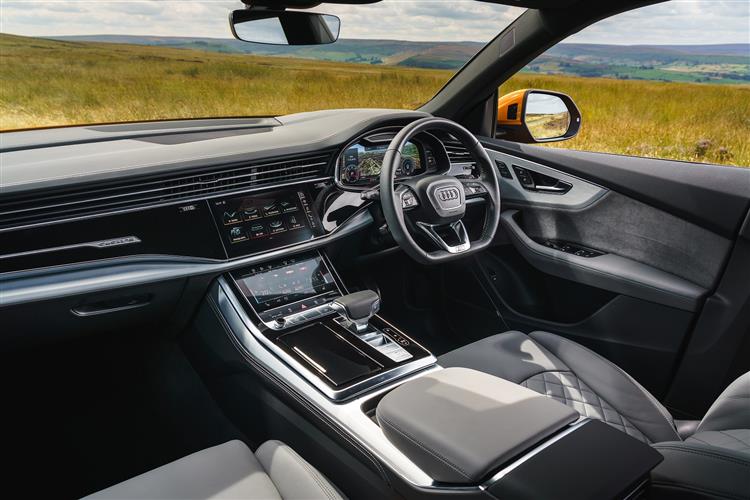 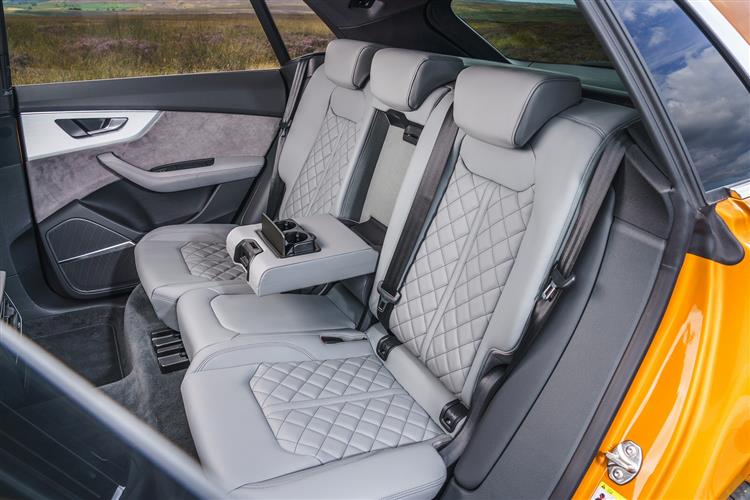 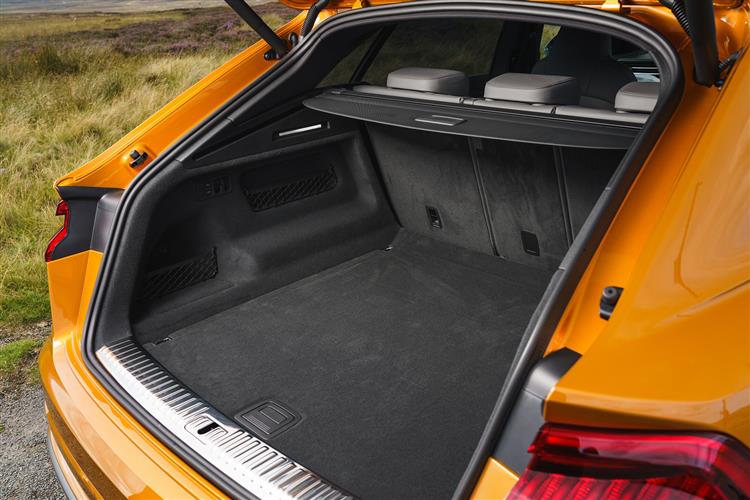 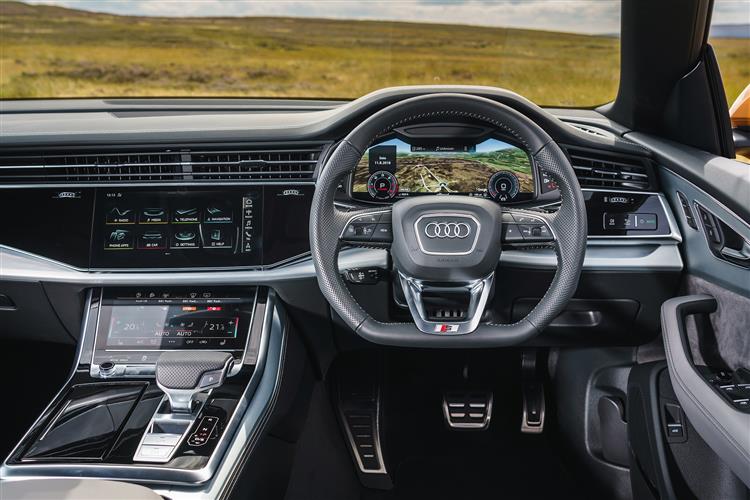 The Audi Q8 is one of those large coupe-style SUVs, part of a genre pioneered by BMW a decade ago with their X6 and subsequently copied by Mercedes. Audi's considered solution for fashion-orientated folk browsing in this segment is Q7-based and very Vorsprung durch technic.

The Volkswagen Group's MLB Evo platform has certainly spawned lots of luxury SUVs. First, we had the Audi Q7, then the Bentley Bentayga, the Porsche Cayenne, the Volkswagen Touareg, the Lamborghini Urus and here, we've come back full circle to a derivative of the Q7, this swoopier Q8. You can see why Audi wants a slice of the large sector SUV-coupe market. BMW has, after all, shifted over half a million X6s since that car pioneered the genre a decade ago. This one rolls off the same Slovakian Bratislava line as the Q7, the Cayenne and the Touareg and shares the same wheelbase and cabin width as its large Audi stablemate. The driveway demeanour though, is very different here, the emphasis on fashion, rather than family. It's pointless asking whether we really need this kind of car. People want them. Audi's made one. Is it any good? Let's find out.

The Q8's primary engine is the '50 TDI' 3.0-litre diesel unit we're familiar with from the A7 Sportback and the A8. A 3.0 TFSI petrol-engined variant with 340PS (the Q8 '55 TFSI') is also available. And Audi also offers two sporting models, the 435PS SQ8 TDI. And the 600PS V8 petrol RS Q8. We'll focus on the '50 TDI' 286PS derivative because most customers will. This puts out a hefty 600Nm of pulling power and accelerates this large SUV from 0 to 62mph in 6.3 seconds on its way to a top speed of 144mph. Your transmission will be an 8-speed Tiptronic auto. And of course there's standard quattro 4WD, which divides torque front-to-rear in a 40:60-split. When required, it transfers the majority of power to the axle with the better traction. Adaptive air suspension with controlled damping is a standard feature, with a sport set-up. This further improvers the supple ride you can expect from the aluminium five-link front and rear suspension. It can be adjusted to four modes with the Audi drive select dynamic handling system, varying the ride height of the body by up to 90mm. Q8 buyers also get standard 'progressive steering' which becomes increasingly direct as the steering angle increases.

Audi's understandably keen to point out the differences between this Q8 and the more conservative, family-oriented Q7 model it's mechanically based upon. Its coupe-style roof line makes it appear much lower than that sister model and it's 66mm shorter and 27mm wider. Plus there's a more distinctive front end, a shorter rear overhang and a mighty set of 21-inch wheels. Thanks to the frameless doors, the coupe-type roof line stretches low across the vehicle body visually, ending in a long roof spoiler. The roof line arches slightly towards the flat sloping, strong D-pillars, which are supported by wide, muscular contours. Inside, the cabin delivers the latest touch-sensitive piano black-trimmed interior we've lately seen in the brand's rejuvenated A7 and A8 models. With the dashboard's black-panel look, the main controls almost dissolve into the fascia's large, black surface when switched off. Of course, this coupe-style model doesn't provide the Q7's third row of seating, but Audi insists that there's ample room for five people, pointing out that the interior space exceeds that of the direct competitors in almost all relevant dimensions. The luggage compartment holds 605-litres, which increases to 1,755-litres with the rear backrests folded down. Two golf bags can easily fit in diagonally.

Pricing starts at around £65,000 for either the 50 TDI 3.0-litre diesel variant or the 55 TFSI petrol model. That's very competitive with this model's two main rivals, the BMW X6 and the Mercedes GLE Coupe. Pricing starts at around £80,000 for the SQ8 and around £101,000 for the RS Q8. Standard equipment across the Q8 range is, as you'd imagine, is very comprehensive. Like all top Audis, this one gets the brand's 'MMI navigation plus' infotainment system, which uses the latest LTE Advanced standard for data transfer. The navigation system offers intelligent destination suggestions based on previous journeys. Luxury is of the highest order but many owners will want to embellish the standard kit list with niceties like the optional 23-speaker Bang & Olufsen sound system. As is usual nowadays, there's autonomous driving tech too, most of it included in the optional 'Tour assist' package which gives you adaptive cruise assist (a feature that provides longitudinal and lateral control in all speed ranges) and 'efficiency assist' (which uses sat nav data to automatically adjust your Q8's speed to the current speed limit and automatically reduces your speed before corners, during turning and on roundabouts to lower fuel consumption. Plus there's 'Emergency assist' which takes control of the car if you're taken ill and safely stops it automatically.

The Q8's primary 50 TDI 3.0-litre diesel engine uses mild hybrid technology, integrating a lithium-ion battery and a belt alternator starter into a 48-volt primary electrical system for greater efficiency. The rechargeable battery is located underneath the luggage compartment floor and stores 10 Ah of electrical capacity. That allows this Audi to coast between 34 and 99mph with the engine switched off; when you brush the throttle, the belt alternator starter restarts the engine quickly and during deceleration can recover up to 12kW of energy. The start-stop range starts as low as 13mph. Let's get to the WLTP figures. For the 50 TDI variant, the combined fuel figure is 33.2mpg and the CO2 reading is 222g/km. The alternative 55 TFSI petrol variant manages up to 26.4mpg (combined) and up to 243g/km of CO2. The SQ8 TDI manages up to 31.4mpg and 235g/km of CO2. What else? Well bear in mind that all versions of this car will be subject to the government's tax levy for models costing over £40,000. That stands at £450 a year for the first five years of ownership. And of course, as with all modern diesel cars, the TDI versions of this one use an AdBlue fuel additive, stored in a separate rear tank that'll need to be topped up as part of regular servicing. Talking of maintenance, servicing your Q8 should be no more taxing than is the case with one of the company's smaller cars. As usual with Audi models, there's a choice of either a 'Fixed' or a 'Flexible' servicing regime, the choice between the two depending on the extent of your likely annual mileage.

You can see why Audi felt it had to build this car, though it's a little hard to understand why it took the brand so long to bring it to market. We had half-hoped that this delay might have enabled Ingolstadt to bring something radically new to the fashionable formula undergirded this sort of car. That hasn't happened here, but even so, the Q8 does manage to bring buyers seduced by this class-conscious category something a bit different. Turn up to a business meeting in an X6 or a Mercedes GLE Coupe and some might dismiss you as a showy extrovert. Arrive in a Q8 and the impact would be a touch more subtle. For some, that will be important, particularly as this Audi is - in its own way - just as stylish and avant garde as its two main Teutonic arch-rivals. If you want one of these, then probably nothing else will do. Which is exactly as it should be when it comes to this class of car.

Fill out the simple form below to get a quote for this AUDI Q8 ESTATE 55 TFSI Quattro S Line 5dr Tiptronic [Leather] lease.