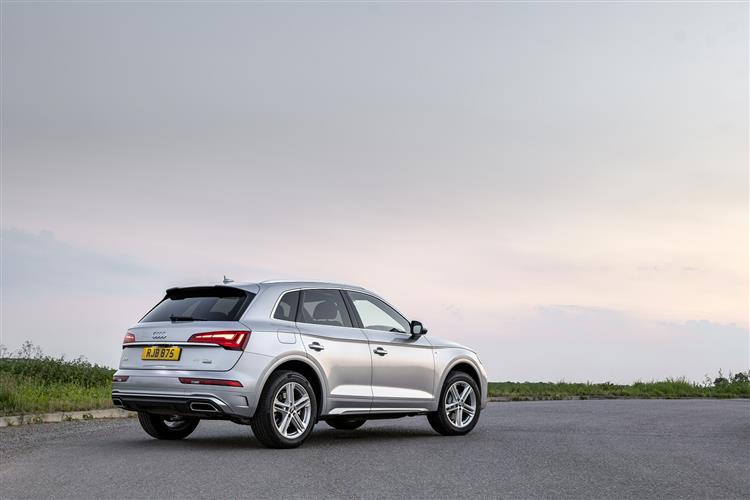 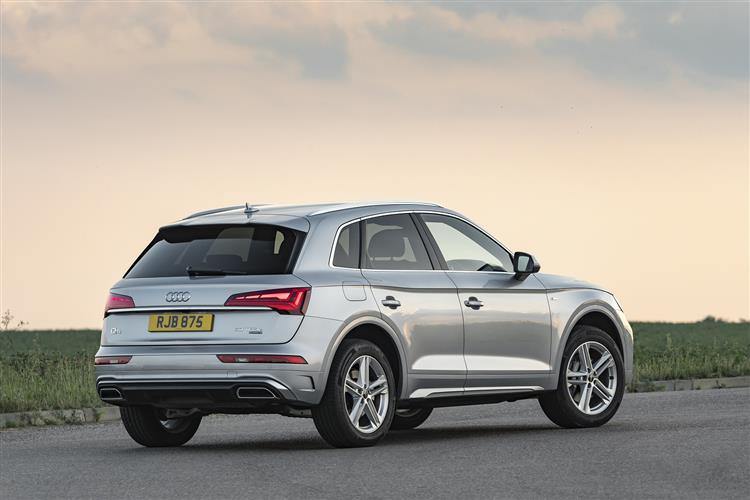 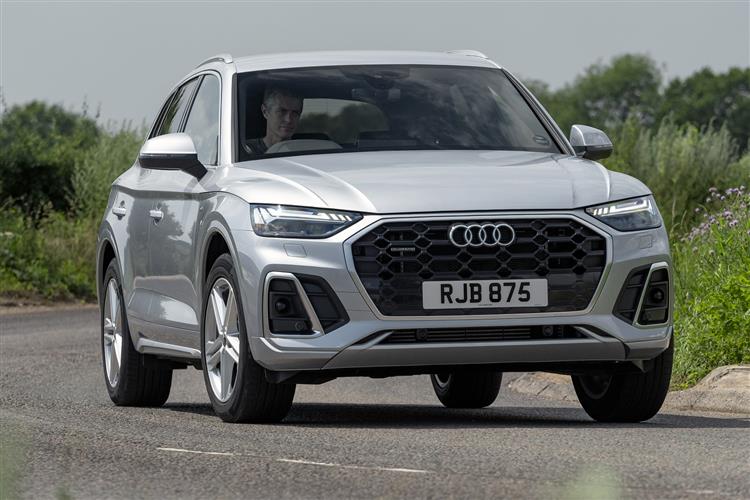 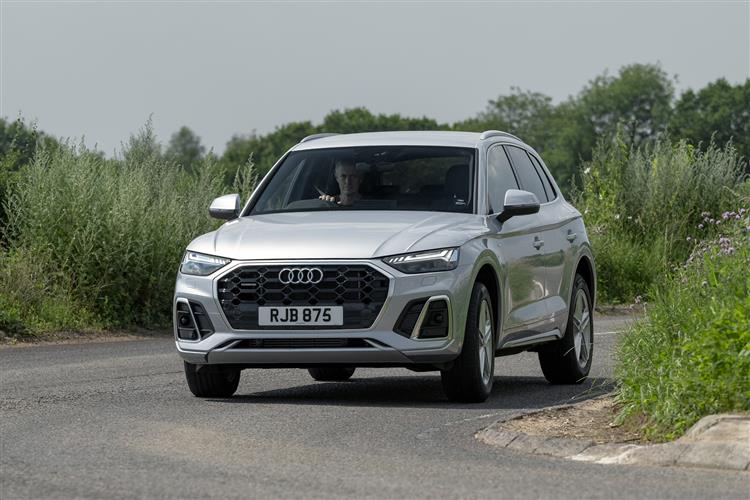 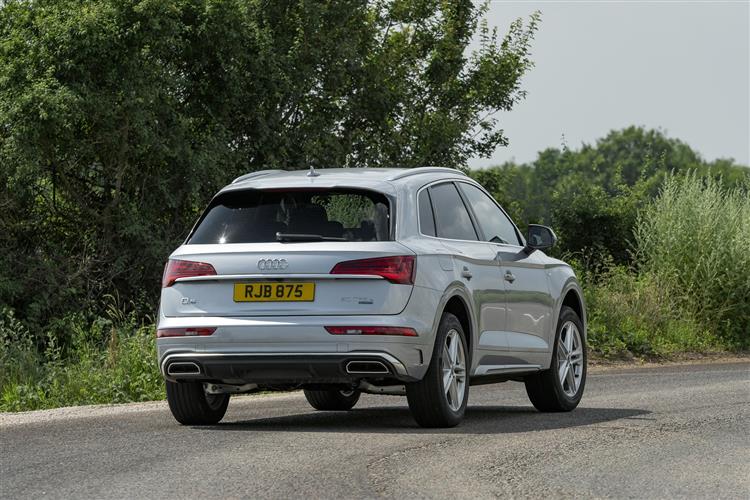 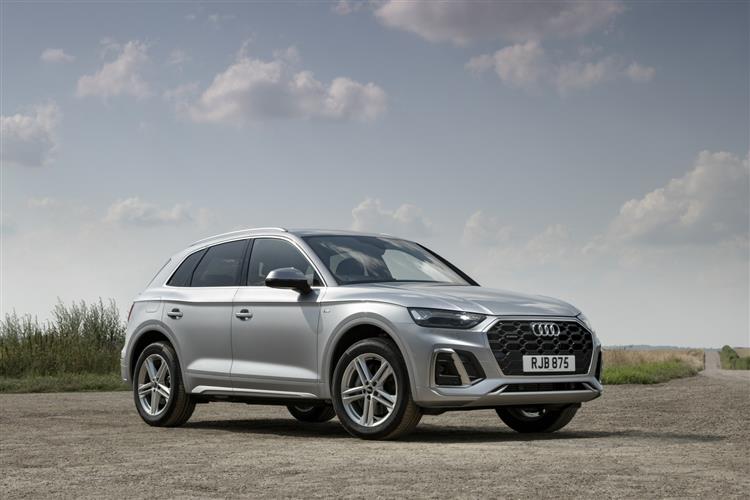 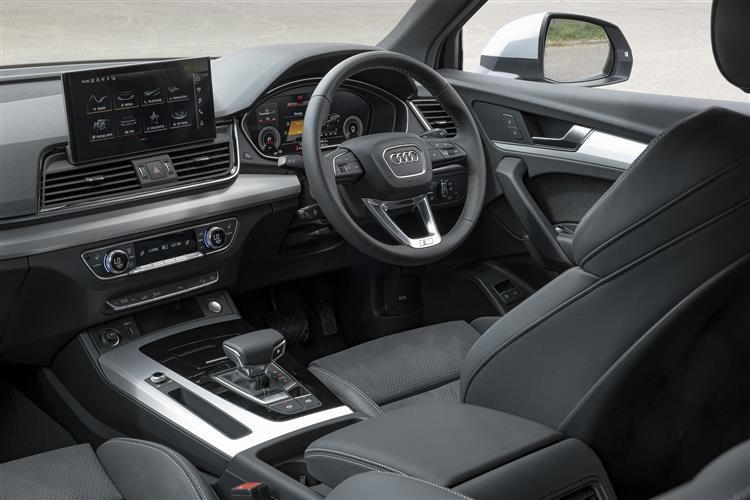 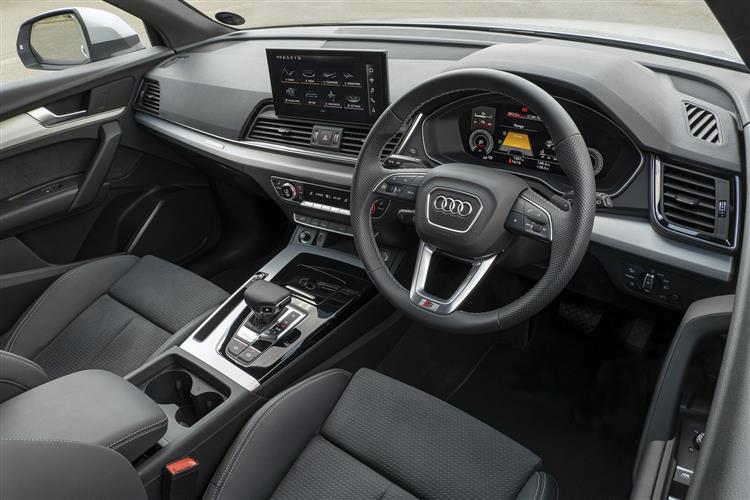 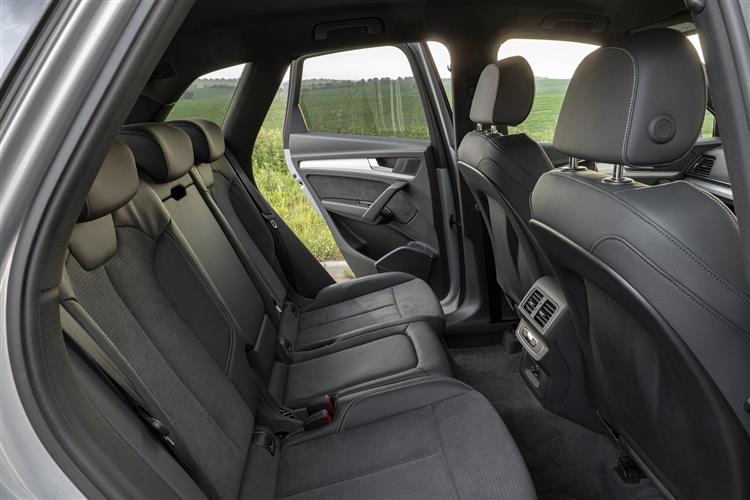 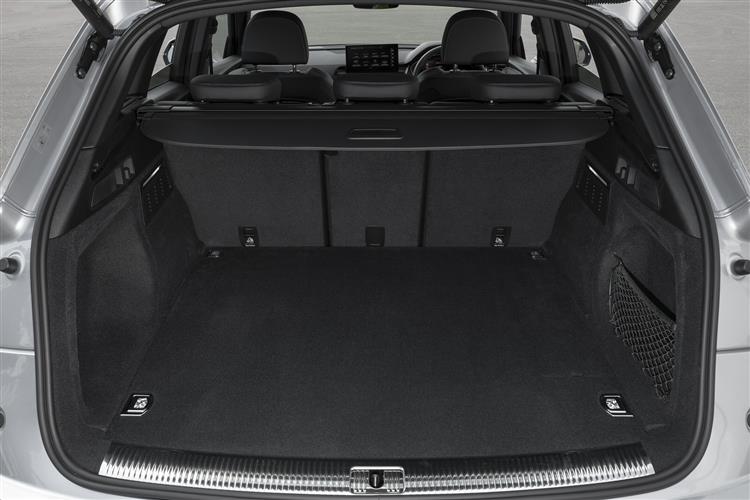 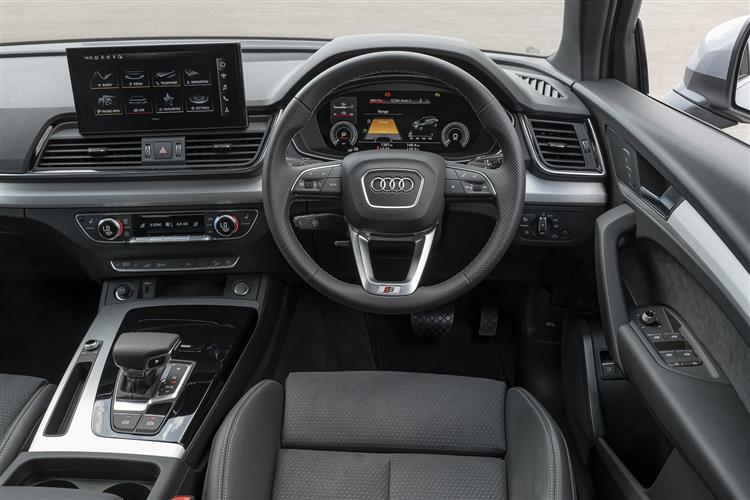 If you're about to buy, lease or contract hire a premium upper mid-sized luxury SUV - say something like an Audi Q5 - you'll probably be anxiously scanning your Benefit-in-Kind taxation exposure. This Q5 TFSI e plug-in hybrid model should deliver for you on that front. But what else can it offer?

The plug-in hybrid alternative is now an established option amongst all the premium brand makers - they now offer PHEV powertrains in almost every segment. Take Audi and their strong-selling the segment Q5 SUV, which serves the plug-in market with two body styles and a single powertrain variant, the 299PS 50 TFSIe. This uses an electrified version of the brand's familiar 2.0-litre TFSI petrol powertrain and offers an electric driving range figure sufficient to make possible the sub-40 g/km BiK taxation rating that likely owners will be looking for. But this model's three key competitors - the Volvo XC60 Recharge T6, the Mercedes GLC 300de and the BMW X3 xDrive30e - all claim the same thing. What can this Audi offer to set itself apart?

Audi's latest TFSI e plug-in technology in this Q5 sees the usual 2.0-litre TSI petrol four cylinder turbo engine paired up to an electric motor which is in turn powered by a much bigger version of the lithium-ion battery that features with Audi's mild hybrid tech, this one 14.4kWh in size. The range is now based around a 50 TFSI e model with a combined system output of 299PS and a WLTP-rated EV driving range of up to 38 miles. The gearbox is Audi's usual smooth 7-speed dual-clutch S tronic set-up. As well as the usual Audi drive select mode settings (Dynamic, Offroad and so on), with the TFSI e, you get three further mode options via an EV button; 'EV' which allows for driving just using the battery, proving there's enough charge; 'Battery Hold' - allowing you to 'save' battery charge for later in your journey; and 'Hybrid', which is what you'll use most often, combining battery and engine power. Like other top Q5s, this one features Audi's 'Predictive Efficiency Assistant' system. This is able to adjust the level of brake energy regeneration based on sat nav data, freewheel with the engine off and even adjust your positioning to the car in front. And the AWD set-up gets Audi's Ultra Technology, which proactively anticipates demand on the quattro 4WD system.

There are few visual giveaways as to this TFSI e model's plug-in status - unless you're eagle-eyed enough to spot the altered badgework and the extra charging flap. As usual with a Q5, there's a choice between the standard SUV body shape and a Sportback variant with its swept-back silhouette. Either way, there's a sculpturally flared Singleframe grille with a solid frame dominating the aerodynamically flat front end. This feature is flanked by headlights that use full-LED technology - or buyers can order Audi's advanced adaptable Matrix LED system as an option. A distinctively curved and strongly undercut shoulder line gives structure to the side view. The strongly emphasised wheel arches are a reference to the quattro permanent all-wheel drive system, and the low greenhouse tapers back down early, even on the conventional SUV bodyshape variant. Just as at the front, horizontal lines at the rear aim to convey an image of width and presence. The tailgate wraps around the C-pillars - a typical feature of Audi Q models. At the wheel, a three-dimensional trim strip runs across the entire width of the instrument panel and there's a three-spoke multifunction steering wheel. This remains a five-seat model and the rear seat is split into three segments. Longitudinal and seat back angle adjustment are optional. As usual with a PHEV, luggage space is compromised by the positioning of the PHEV system's lithium-ion battery beneath the boot floor. In this case, the space on offer falls by 65-litres with the rear bench up. Which means you'll have 455-litres to play with in the standard SUV model - though some of that will be taken up by a bag containing the charging cables.

Q5 TFSI e pricing starts at around £51,000 - for the SUV 50 TFSI e model: there's a premium of around £2,500 more for the Sportback body shape. either way, there's a choice of 'Sport', 'S line' and 'Vorsprung' trim levels. As you'd expect across the range, all the usual executive equipment niceties feature, plus owners get the useful 'myAudi' app which allows customers to use the services from the Audi connect portfolio on their smartphones. This is particularly practical with electrified models. The app can be used to check the battery and range status, start the charging process, program the charge timer and view the charge and consumption statistics. Furthermore, the route planners in both the app and the MMI navigation in the car show charging stations. Another function of the myAudi app is preheating/precooling prior to departure. In this case, the climate control system compressor and the auxiliary heater in the car are powered electrically. The customer can determine exactly how the interior should be heated or cooled while the battery is being charged. Depending on the optional equipment chosen, the same applies to the seat and steering wheel heating, heating of the windscreen, rear window and mirrors, and the seat cooling.

As with any PHEV, to get the most out of this Q5, you'll need to keep the car charged up (which should take around two and a half hours from a 7kW garage wallbox) and make the absolute most of the potential all-electric driving range, rated at up to 38 miles. If you don't do that, you'll essentially end up with a heavier version of the conventional 45 TFSI petrol variant - and take it from us, one of those isn't going to be cheap to run. The quoted efficiency stats are up to 166.2mpg on the combined cycle and up to 39g/km for the 50 TFSI e model. This Q5 TFSI e's lithium-ion battery is made up of 104 prismatic cells and stores 14.4kWh of energy with a voltage of 381 volts. And the car is supplied as standard with a compact charging system plus a Mode 3 cable with Type 2 plug for use at public charging stations. The compact charging system comprises cables for household and industrial outlets, plus a control unit. The system features an LED status display and safety functions such as temperature and residual current monitoring. Audi also offers an optional charging clip, a lockable wall-mounted holder for the charging system. The integrated charger charges the lithium-ion battery with a maximum power of 7.4kW. Even at a 220V household outlet, an empty battery can be fully and conveniently recharged overnight in roughly six hours. Using a 7kW garage wallbox, you should be able to reduce that to around two and a half hours.

We've seen plenty of Audi hybrid models in the past, but this one is certainly the most credible to date. To be frank, it doesn't really offer much you can't also get from rivals sold by BMW, Volvo and Mercedes. But it doesn't lack much that these competitors offer. Which means that if you are attracted by this Q5's effortlessly cool vibe, classy cabin and uber-smooth refinement - as plenty in this segment are - then there are a few reasons not to sign your cheque Ingolstadt's way. We can't help thinking though, that the that the industry should be further along by now in offering PHEVs like this at more affordable prices, with greater driving range and less compromised luggage compartments. In a few years, it probably will be. For the time being, cars like the Q5 50 TFSI e are what we have. Life is what you make it.

Fill out the simple form below to get a quote for this Audi Q5 Estate 55 Tfsi E Quattro Compet Vorsprung 5dr S Tronic lease.