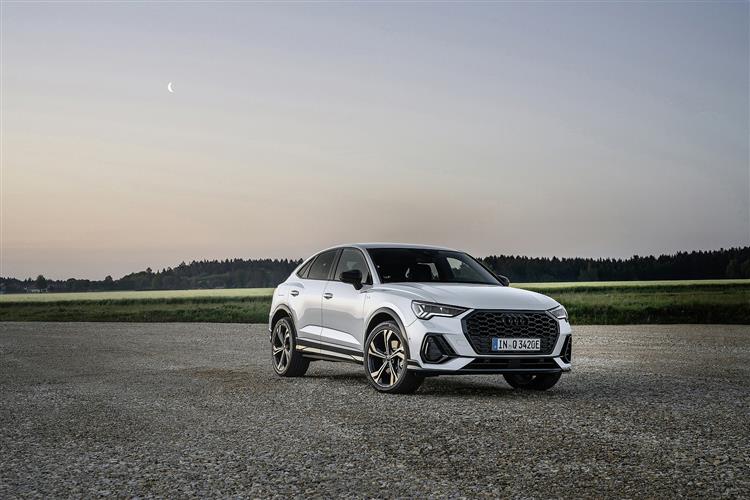 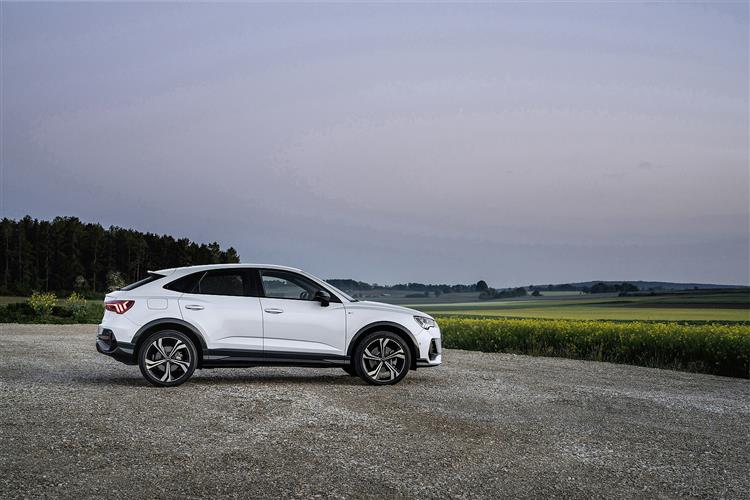 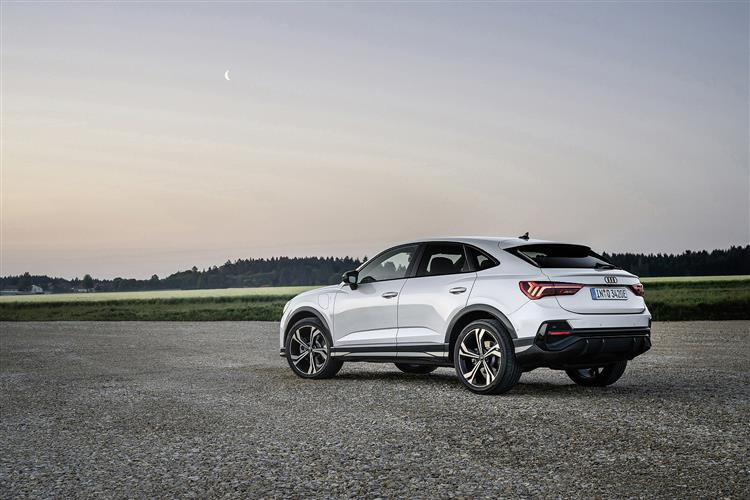 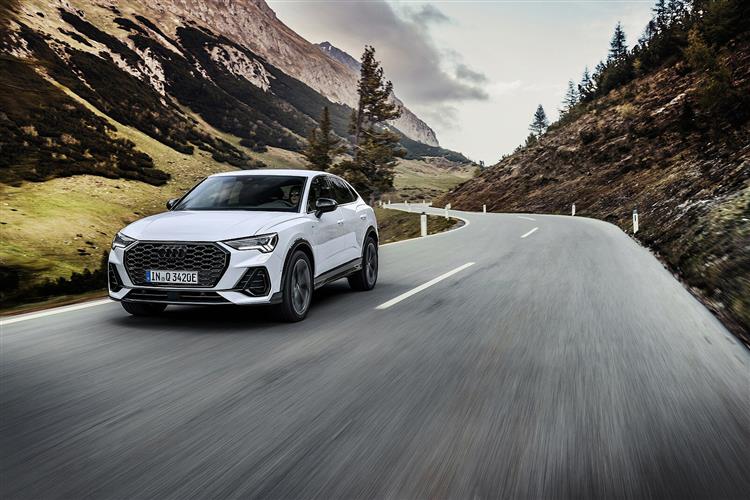 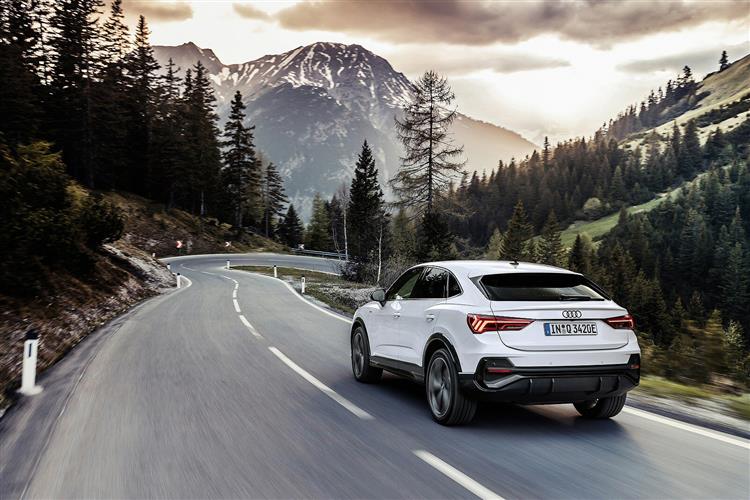 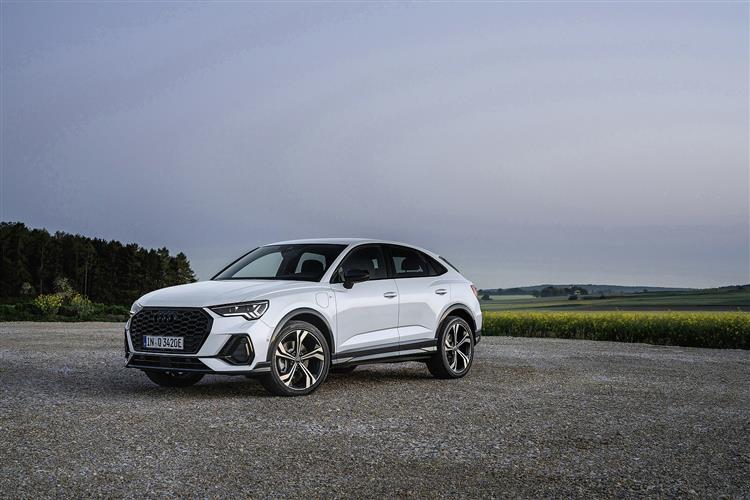 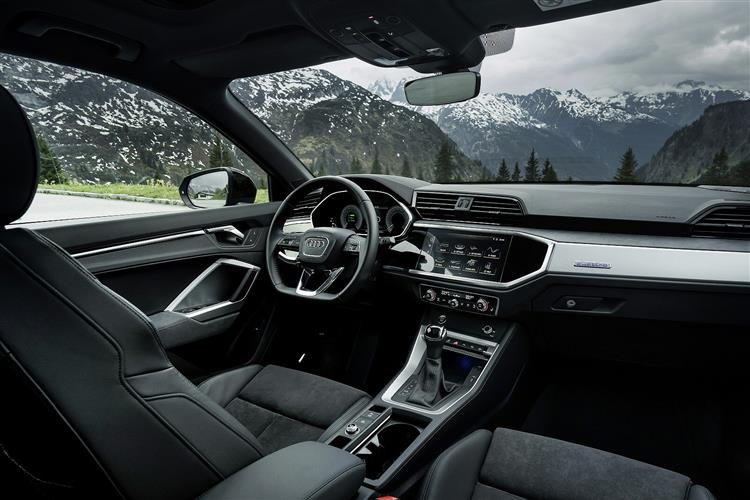 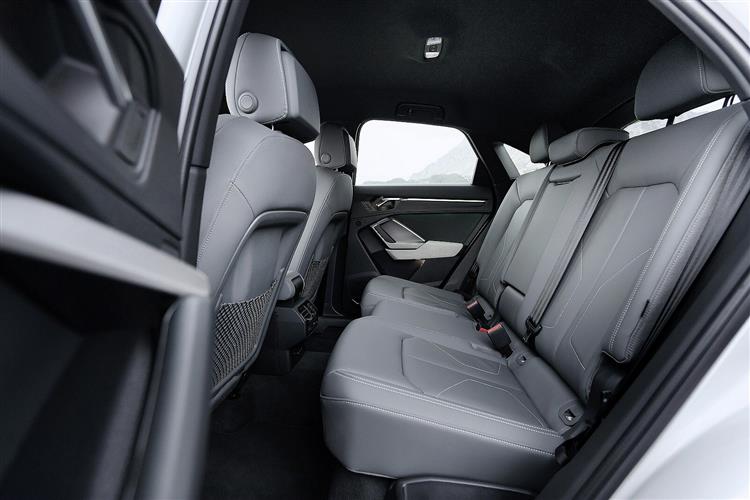 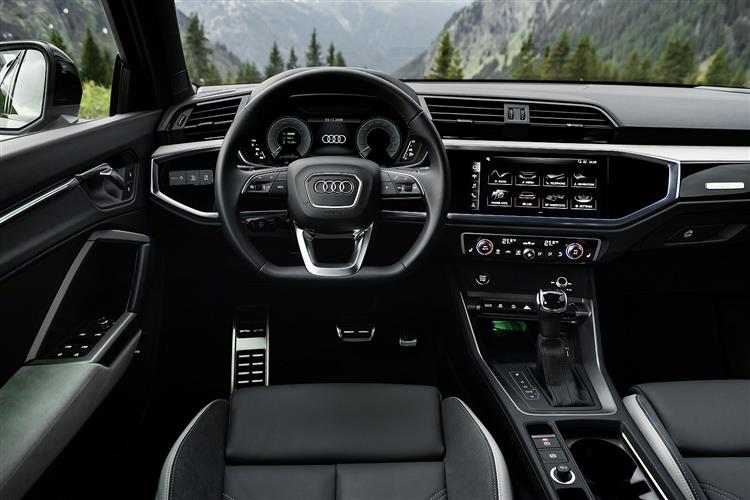 Audi extends its Sportback franchise into the SUV sector with this compact stylised Q3 Sportback model. It's aimed most precisely at BMW's similarly-sized X2, but potential buyers will also be looking at upper-spec versions of premium small crossovers like the Range Rover Evoque, the Mercedes GLA and the Lexus UX. There's mild hybrid electrification, trendy media connectivity and a cool Audi cabin. Just as you'd want.

Pay more, get less. Coupe models have always unblushingly offered this curious proposition and this one continues the tradition, Audi's Q3 Sportback. This, as you can see from the picture, is one of those 'coupe-style' compact SUV models, a sub-niche of the market already populated by BMW's X2. This fashion-led derivative has a roofline 49mm lower than that of its standard sibling and virtually all the bodywork panels are different, only the front wings being shared with the standard Q3. Plus mild hybrid petrol engine technology features at the foot of the range. Sounds quite promising.

The range kicks off with a 150PS 35 TFSI 1.5-litre petrol engine using Audi's latest 12V mild hybrid technology and S tronic auto transmission. This unit is aided by cylinder-on-demand technology, which at low and medium loads deactivates the second and third cylinders to reduce consumption. Manual transmission is also available with this derivative, which only comes with front wheel drive. Further up the range, it's a 4WD-only line-up. There's a 45 TFSI quattro model that uses a 2.0 TFSI unit and offers 230PS. If you want a diesel, there's the usual 150PS 2.0 TDI engine in the 35 TDI quattro. Plus there's a 40 TDI diesel variant with 200PS. There's also a 45 TFSIe Plug-in variant which uses a 1.4 petrol engine with a combined 245PS output. The top RS Q3 Sportback uses a 2.5-litre 400PS TFSI petrol unit. Audi has tried to make this Sportback variant a little more dynamic to drive than the ordinary Q3. Sport settings for the front MacPherson strut and four-link rear set-up are standard across the range in the UK, and strike an impressive balance between absorbency and assured handling. For the 4WD models, an electronically controlled hydraulic multi-plate clutch on the rear axle can begin sending a proportion of the torque from the front to the rear axle right from the point of turn-in to a bend. Combined with torque vectoring, this makes this Audi an impressive rapid point-to-point compact SUV.

The Q3 Sportback measures 4,500mm in length, stands 1,567mm tall and is 1,843mm wide, which makes the SUV coupe 16mm longer, 49mm lower and 6mm slimmer than an ordinary Audi Q3. The wheelbase is exactly the same with both model variants but this Sportback model's lower roof curvature and elegant shoulder line makes it look a slightly bigger car. At the rear, a long roof edge spoiler sits above the slim window to emphasise the width of this crossover. Inside, it's pretty much as in any other Q3. The focal point is a reductive two-level instrument panel incorporating the brand's 10.1-inch high resolution MMI touch display, giving access to the top-of-the-line MMI navigation plus system. Audi says that this SUV coupe has been designed as a fully-fledged five seater. The rear seats can be moved 130mm longitudinally as standard; their backrests are divided into three sections, and their inclination can be adjusted in seven stages. Behind the rear seats, the luggage compartment can accommodate 530-litres, and when they're folded down, up to 1,400-litres can be liberated. A standard powered tailgate makes gaining access to this space easy, and for added convenience the loading floor can be used at various levels.

Q3 Sportback prices sit just around £1,600 above those of an ordinary Q3, primarily pitched in the £32,000 to £52,000 bracket.There are 'Sport', 'S line' and 'Vorsprung' trim levels in the mainstream line-up, plus the top RS version. For this kind of money you'll expect cutting-edge media connectivity - and you'll get it. Take the 'MMI navigation plus' package for example, which recognises the driver's preferences based on previous journeys, allowing it to generate suitable route suggestions. Buyers get a 3 year subscription to the usual 'Audi connect' media package which uses the super-fast LTE Advanced standard and provides its services like high resolution satellite images of Google Earth, a traffic information online system and a point-of-interest search function. Hybrid radio is also included in the specification. Depending on a station's signal strength it automatically switches between FM, DAB and the online stream to ensure optimum reception at all times. This Q3 is near the top of its class when it comes to assist systems. Audi Side Assist blind spot monitoring and a lane departure warning function. Plus Audi's 'pre sense front' autonomous braking system is also included. To suit the mood of the moment, there's a bit of autonomous driving tech too, courtesy of the optional adaptive cruise assist, which works with the S tronic auto transmission and incorporates the functions of adaptive speed assist, traffic jam assist and active lane assist.

The big efficiency development here relates to the base 35 TFSI petrol model, which features Audi's MHEV mild hybrid drivetrain, which uses a 12V on-board electrical system. This reduces fuel consumption by recovering up to 12kW of power during deceleration via its belt alternator starter (BAS) and feeding this into a compact lithium-ion battery. If the driver lifts off the throttle at speeds of between 24mph and 99mph, the Q3 Sportback 1.5 TFSI MHEV rolls in neutral or coasts with the engine switched off. The engine management system selects one of these functions depending on the driving situation and the operating state. As soon as the driver accelerates, the belt alternator starter restarts the 1.5 TFSI quickly and smoothly. When accelerating from low speeds, it supports the driver. The start-stop range begins as low as 13mph. That should deliver diesel-like WLTP emissions and fuel consumption, but don't expect that from the other petrol unit, the 2.0-litre powerplant in the 45 TFSI quattro variant. This manages up to 32.8mpg and up to 195g/km of CO2. Which compares to up to 43.5mpg and 149g/km for the 35 TFSI. And up to 55.4mpg and up to 135g/km for the 35 TDI quattro. The TFSIe plug-in variant has a range of up to 31 miles and can be charged via an AC wallbox in 3hrs 45 minutes. Depreciation figures for the Q3 Sportback range should be as strong as they usually are on Audi models. It's a little disappointing though, that the brand sticks to its usual 60,000 mile limit on the three year warranty. Optional extra-cost packages can extend the cover to either four or five years. Pre-paid servicing packages are also available.

The Q3 Sportback doesn't do anything fundamentally better than the standard model upon which it's based, but it looks significantly more desirable. Enough to justify its price premium? We think most potential buyers will think so. These people probably won't care that there's slightly less rear seat and boot space than in a normal Q3. They may not even be bothered that, in truth, this Audi isn't quite as good to drive as rival BMW X2 and Range Rover Evoque models. What's important is that this car comes with an added dose of that cool charisma that Ingolstadt does so well. If for you the ordinary Q3 is a bit, well, vanilla, this version serves up that confection rather differently. With a flake if you like. We can all identify with that.

Fill out the simple form below to get a quote for this Audi Q3 Sportback 35 Tfsi Sport 5dr lease.