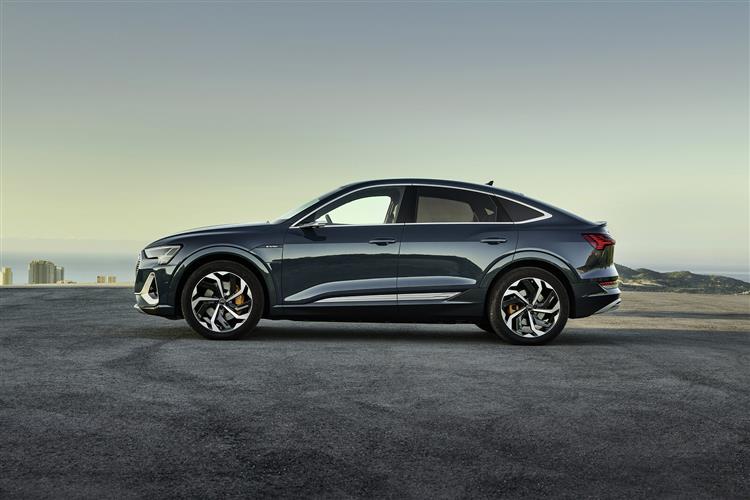 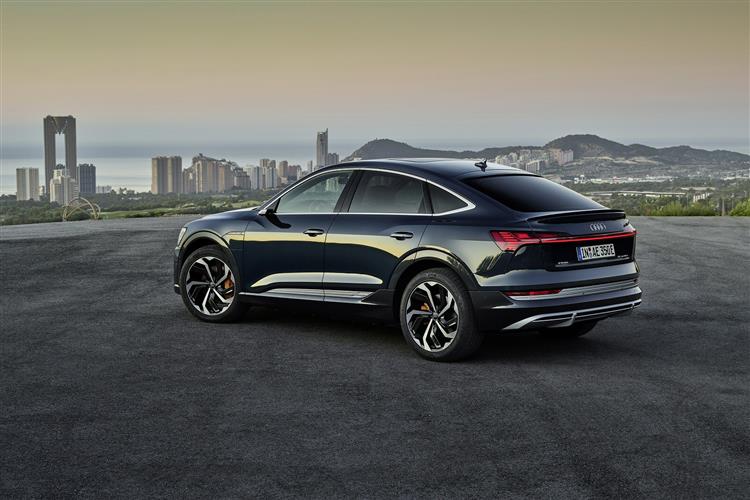 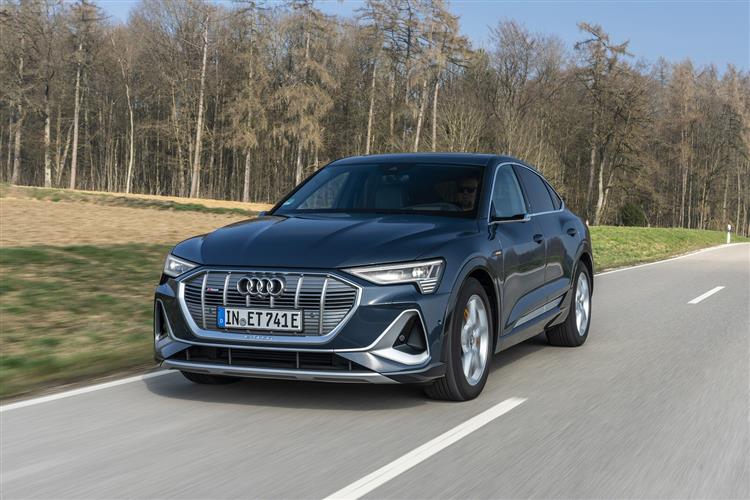 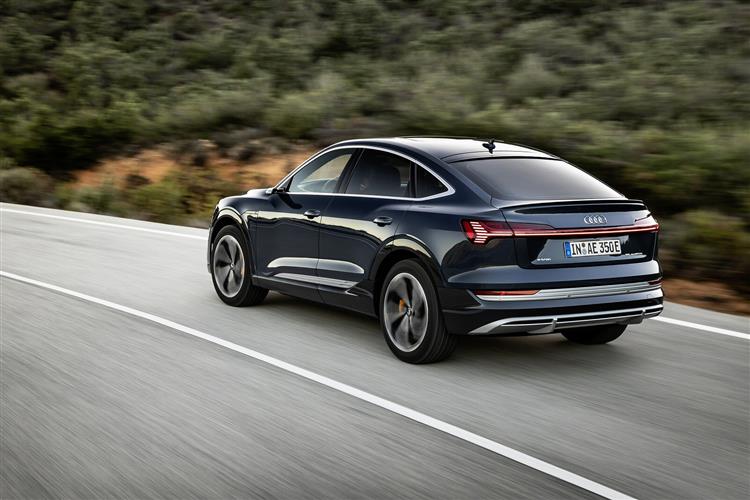 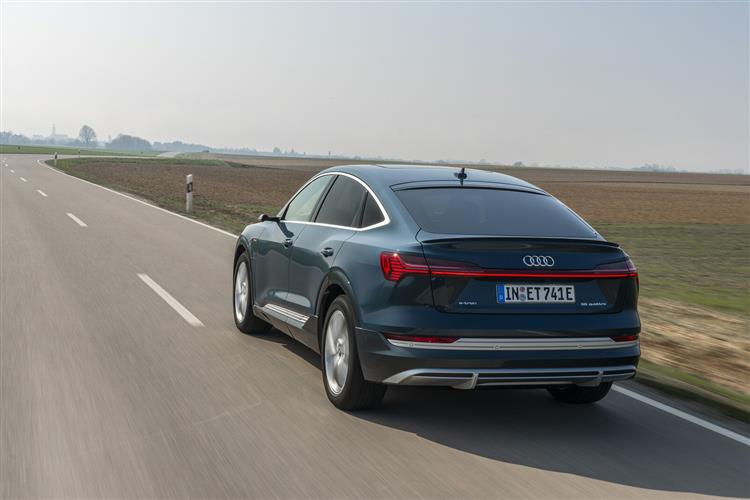 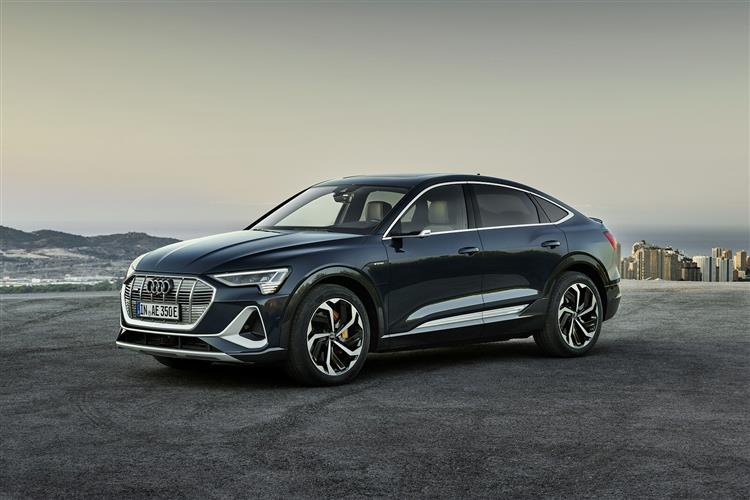 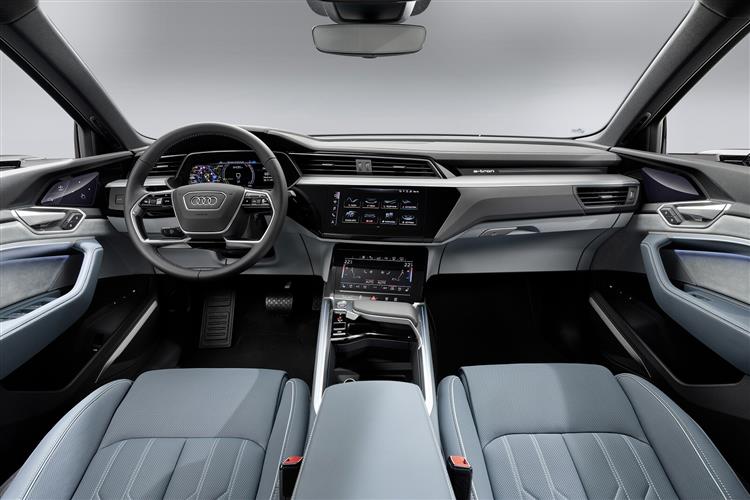 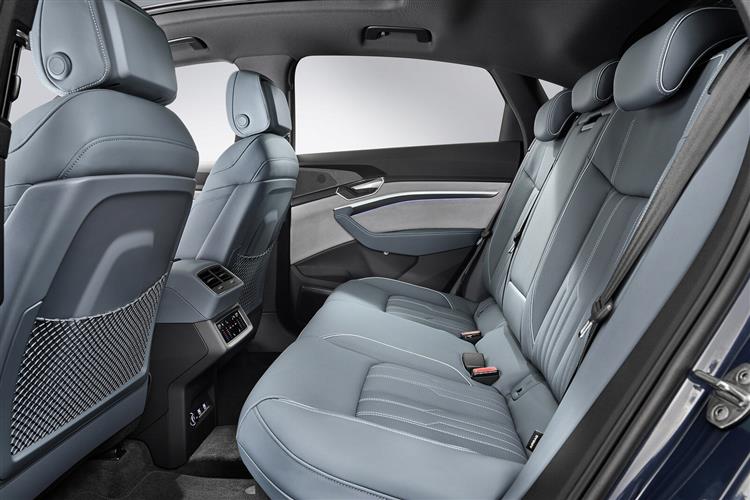 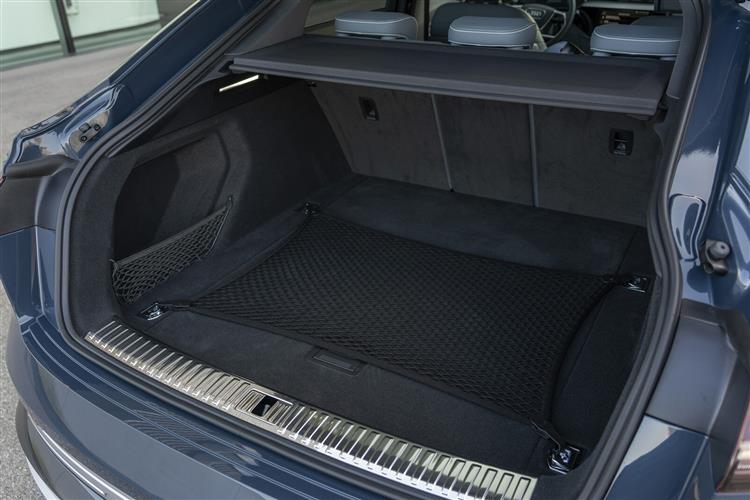 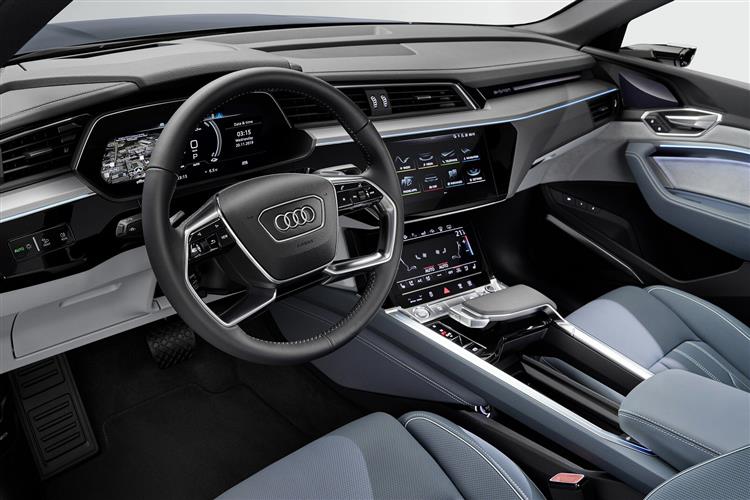 Audi's e-tron EV brand gets a sharper edge with this e-tron Sportback model. Both looks and driving dynamics are noticeably enhanced over the standard car, in both cases in ways that actually improve all-electric driving range. If you thought Jaguar's I-PACE was the only battery-powered luxury large SUV capable of rewarding at the wheel, a drive in one of these might make you think again.

What's possibly the least environmentally sensible vehicle genre on the market? That for sporting large coupe-styled luxury SUVs would have to be right up there, cars like the BMW X6, the Mercedes GLE Coupe and the Audi Q8. Could a car of this sort ever be really socially responsible? With its e-tron Sportback model, Audi thinks it can be. This car, as its name suggests, is a fastback version of the brand's regular e-tron, the company's large full-electric EV which battles segment rivals like Jaguar's I-PACE and the Mercedes EQC. The ordinary e-tron is an impressive feat of technology but can sometimes feel a little flat-footed in this company. The e-tron Sportback doesn't just look more dynamic: Audi's moved to make sure that it drives that way too.

Let's start with the key facts. In standard 55 quattro form, this e-tron Sportback uses a 95kWh battery pack that powers a dual-electric motor system with 402bhp and 664Nm of torque which enables a 62mph sprint time of 5.7s. You only get that though for up to eight seconds in an available 'Boost' mode activated by slotting the gear selector into 'S'. Leave it in 'D' and the combined motor output is reduced to 355bhp and the 62mph times takes 6.6s. To give you some segment perspective, with a rival Jaguar I-PACE, the maximum combined output is 394bhp and 62mph takes 4.8s. For those really wanting to better that Jag in this Ingolstadt model, Audi has developed an even faster e-tron S variant with twin electric motors on the rear axle and 496bhp which gets to 62mph in just 4.5s. Our focus here though is on the standard e-tron Sportback 55 quattro. Here, as usual with the e-tron model line, power is sent to all four wheels via a 1-speed auto transmission attached to each motor. For the e-tron Sportback though, Audi developed a decoupling mechanism between the front and rear axles. This enables it to send drive exclusively to the rear wheels in normal motoring when you're in 'D'; only when you kickdown in 'S' is the other motor activated and the front wheels brought into play. Two more key factors differentiate this Sportback model from most normal versions of the ordinary e-tron EV. Sport adaptive air suspension with controlled dampers can vary ride height by up to 76mm and lowers the body for sleeker aerodynamics at higher speeds. Even more significant is the 'dynamic handling system Audi drive select' driving modes set-up which offers seven profiles, enabling the driver to programme in anything from smooth rolling comfort to sporting, stable handling.

Like the standard e-tron, this Sportback version is a substantial thing, measuring in 4,901mm long, 1,935mm wide and 1,616mm tall. To give you some perspective, that makes it 85mm shorter, 60mm narrower and 89mm lower than Audi's conventional offering in this segment, the Q8. The difference over an ordinary e-tron is obvious; a coupe-like rear roofline cut from the A7 Sportback sweeps back 20mm lower into a liftback-style tailgate. But of course the underpinnings are shared with a normal e-tron. Which means that this car doesn't use the MEB or PPE platforms that the Volkswagen Group specifically developed for EVs produced by its brands. Instead, there's an electrified version of the ordinary MLB platform found in the company's conventional large models. Inside up front, the e-tron Sportback (unsurprisingly) shares everything with a normal e-tron. So there's a dual touchscreen layout in the centre stack and you get the option of virtual wing mirrors that operate in your normal wing mirror sightline with tiny screens. There are differences in the back of course, where the lowered roofline obviously affects headroom but a couple of adults could live with it. Boot capacity falls to 615-litres, 45-litres less than the e-tron but folding the rear bench frees up 1,655-litres. In addition, as with that car, you get an extra little carriage compartment at the front where the engine would normally be, though it's mostly taken up by the charging leads. You could put a laptop or a small bag there though.

You'll pay around £80,000 for the e-tron Sportback 55 quattro with its 95kWh battery in its single 'S line' level of trim. That means a substantial £9,000 premium over the equivalent version of the standard e-tron, which might give you pause for thought. Unlike that conventional model, Audi isn't offering the Sportback body shape for our market in lower capacity 71kWh '50 quattro' form. Standard 'S line' kit includes 21-inch wheels, adaptive air suspension and Audi Sport styling elements. You also get full-LED headlights, but Audi hopes you'll want to pay more for the particularly clever digital matrix LED headlights it's developed for this car, a world first. These use video projector micromirror technology which breaks down the light beam into minute pixels and can illuminate the road ahead in high resolution, creating a carpet of light and highlighting obstacles or pedestrians. Plus the beans can greet you as you walk towards the car with five different animations, projected onto either a wall or the floor. The other key extra is the 'Virtual Mirror' option. Here, 'L'-shaped pods replace ordinary door mirrors and transfer footage of what's happening behind to screens integrated into the doors where door handles would normally be. It'll be a real talking point for your passengers.

Electric cars are going to be able to go considerably further once someone designs a battery that doesn't weigh them down like a brick. This model's 95kWh lithium-ion lump may be current state of the art but it tips the scales at 700kgs - which means it accounts for nearly a third of the weight of the whole car, this model tipping the scales at around 2.5-tonnes. Anyway, let's get to the info you'll need here. Those battery cells can be charged using a 150kW fast charger to 80% of capacity in just 30 minutes - but good luck finding one of those unless you're at an Audi dealer. For charging at home, there's a standard 11kW charger, which can replenish the battery in 8.5hours. The claimed WLTP operating range is rated at 278 miles, which is a useful increase on the standard model, brought about by a package of careful engineering. The Sportback body shape's sleeker 0.25Cd drag factor frees up an extra 6.2 miles of range and a further 6.2 miles is added by the system that de-couples the front and rear axles so that the car can run rear-driven most of the time. The brake pads now feature strong springs, reducing friction when they're not in use and freeing up 1.9 miles of extra range; and instead of two water pumps for battery cooling, there's here just a single larger one, reducing weight which adds an extra 1.2 miles of range. Plus you can now use up to 91% of the battery's power (at the original e-tron's launch it was 88%), freeing up 6.2 miles of extra range. Anyway, how close you'll get to the quoted range figure will have a lot to do with you proficient you get with using Audi's energy regeneration control system, which allows you to tailor the car's retardation depending on driving circumstances and road conditions. There's everything from a free-wheeling mode with no retardation at all to maximum regeneration that when set, really pulls you up (by 0.3g) when you come off the accelerator. When you're driving your E-tron with the latter feature set, you'll hardly ever have to use the brakes at all.

Arguably, this Sportback e-tron variant is the car the standard model ought to be. A large luxury EV that's more than just a statement of technology. But one instead with extra pavement presence and an added dose of engagement. The compromises required over the ordinary car in terms of rear seat passenger space and luggage capacity shouldn't be too taxing for most likely owners to make. And this Sportback variant also showcases some useful changes to e-tron tech that Audi's made since this sub-brand's original launch. Previously, we would have positioned Ingolstadt's entrant in this category slightly behind rivals like the Jaguar I-PACE and the Mercedes EQC. Now we're not quite so sure. Try this e-tron Sportback and we think you might feel the same way.

Fill out the simple form below to get a quote for this AUDI E-TRON SPORTBACK 300kW 55 Quattro 95kWh S Line 5dr Auto [C+S] lease.