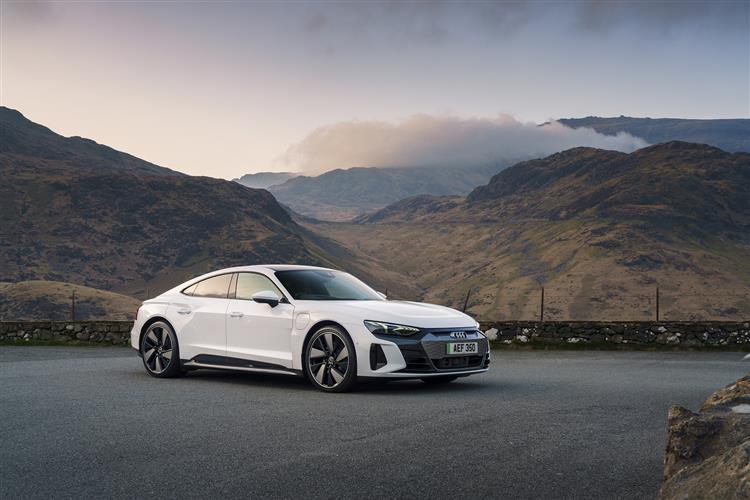 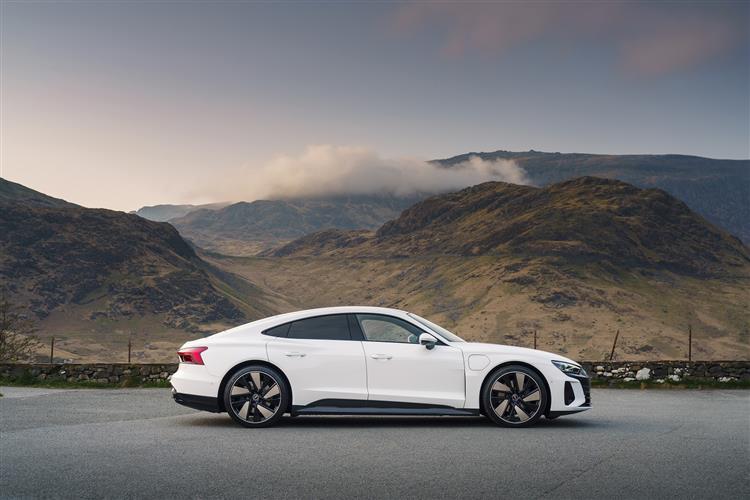 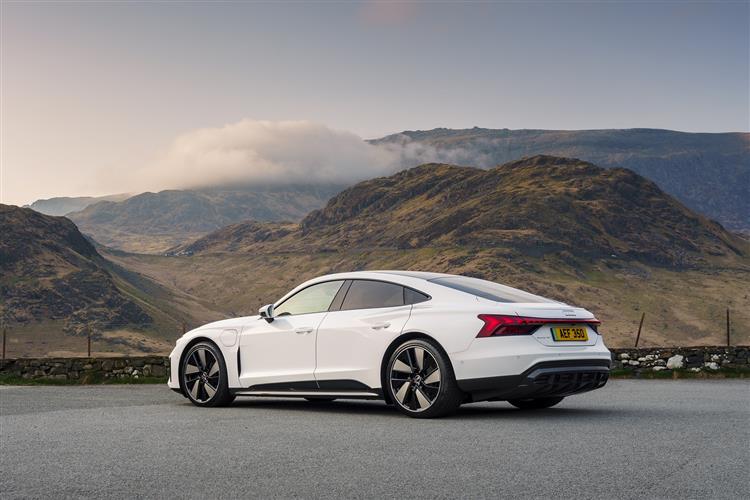 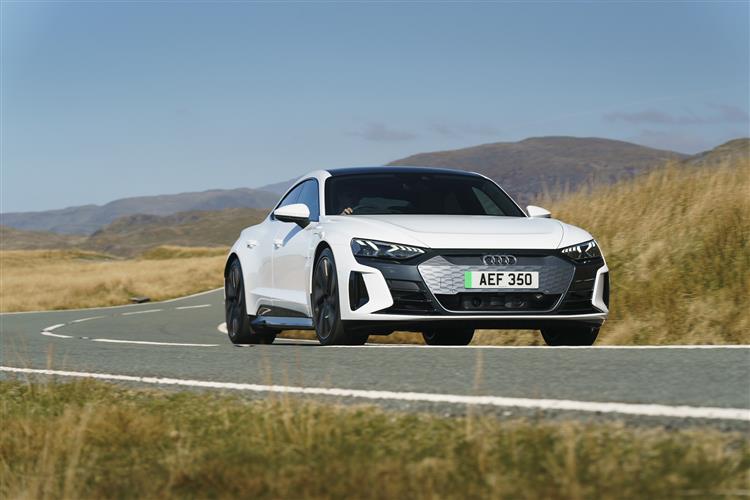 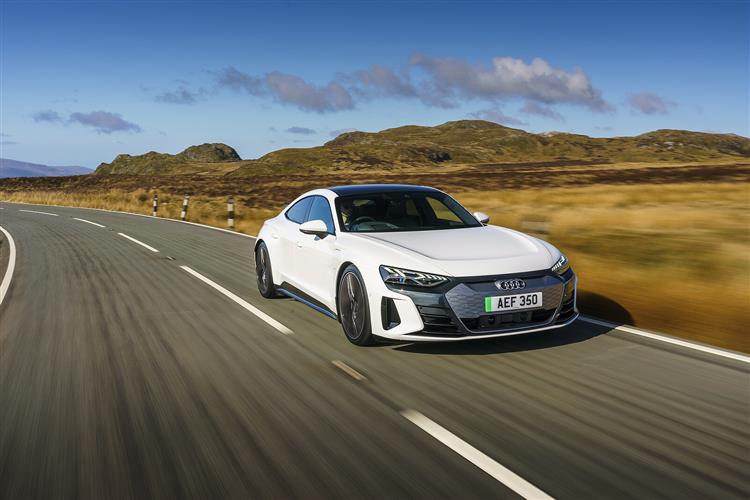 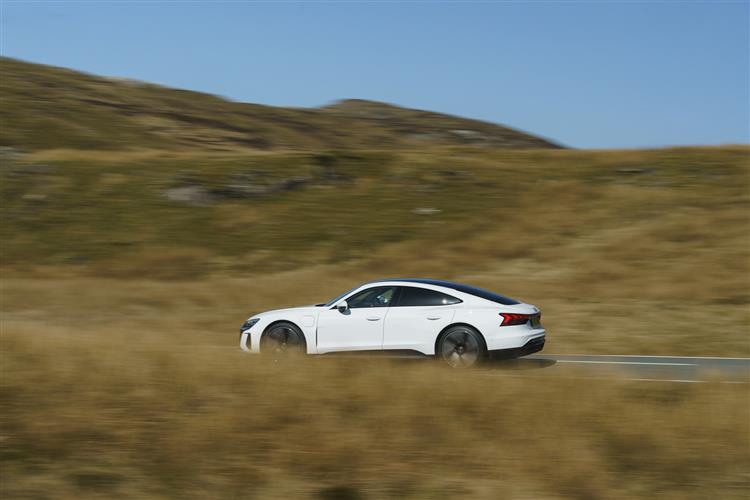 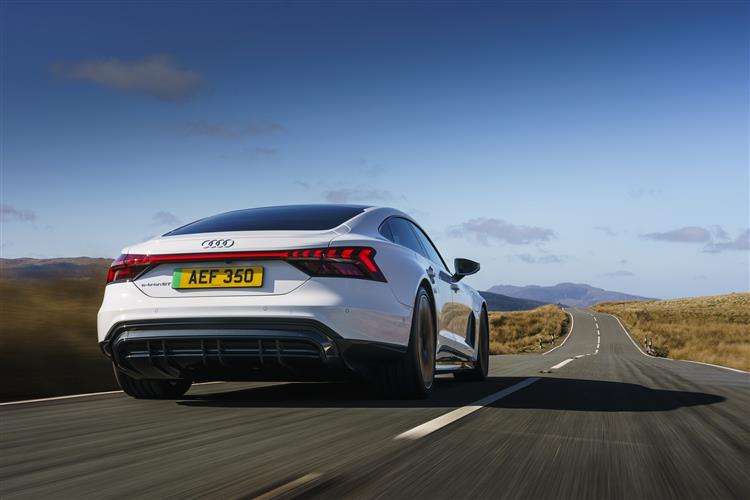 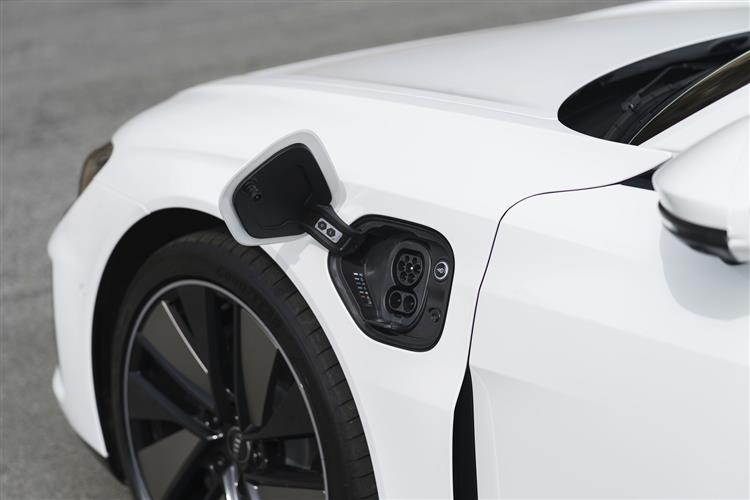 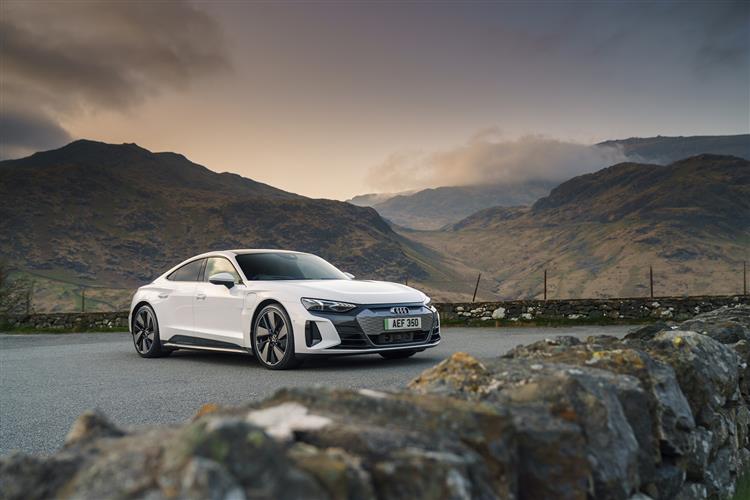 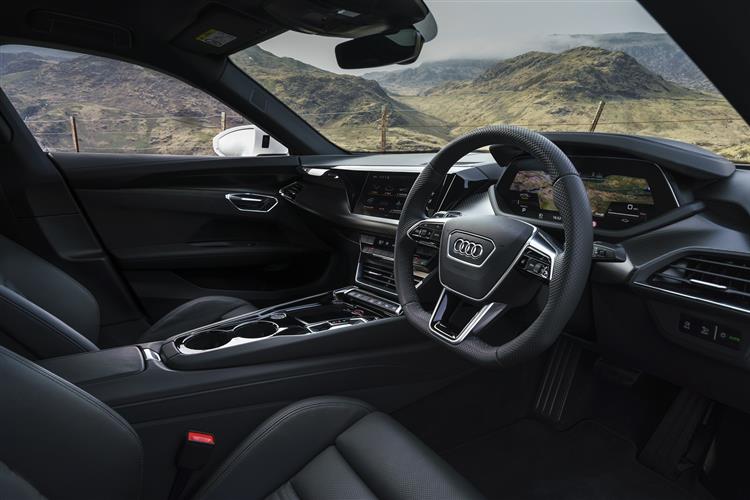 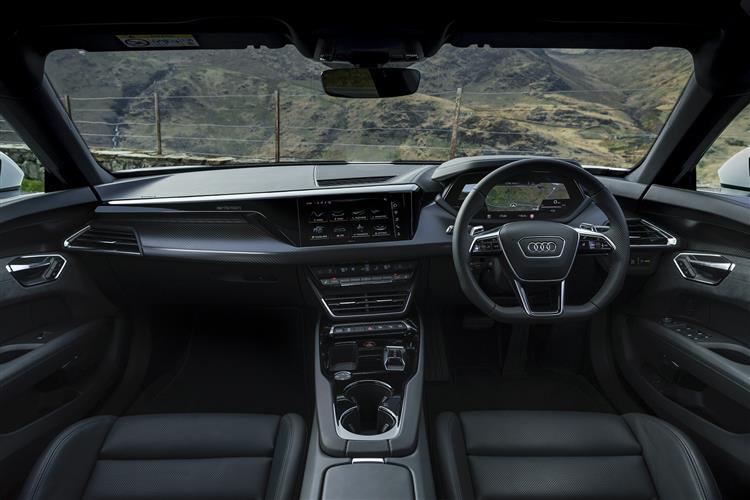 Audi's e-tron GT quattro is a desirable four-door Grand Touring flagship model for the Ingolstadt maker's growing e-tron EV range. Though most of the core technology here is shared with this car's Porsche Taycan cousin, it's all been delivered with a distinctly Audi feel and character. And, most importantly, it has that 'want one' factor.

The earliest full-EVs from Audi tended to be of the expensive and luxurious kind. First, we had the modestly appealing e-tron big SUV. Then, the rather more desirable e-tron Sportback. Followed by this, the e-tron GT quattro, a four-door Grand Turismo sports saloon which also comes in faster RS form. It's the standard GT model though, that we focus on here. If you've troubled to read this, then you're the kind of person who'll probably already know that this car shares a lot of its engineering with its VW Group cousin, the Porsche Taycan. And I mean a lot; the wheelbase and motor positioning is the same. So is the 93.4kWh battery. And so is the J1 platform that everything sits on. Yet Ingolstadt determinedly promises us that this will be a distinctly Audi confection. Are they right? Let's find out.

You can't really blame Audi for wanting to share the engineering of this car with Porsche because it's extremely complex. As this e-tron GT's quattro moniker suggests, it's 4WD, courtesy of motors at front and rear, the back one connected to a 2-speed gearbox that's used only for launch control and some dynamic modes. Total power output (most of which comes from the rear motor) is 469bhp, though there's also a boost mode that raises this to 523bhp for rapid overtaking. If you're interested, all these figures are pretty much the same as those of a mechanically identical Porsche Taycan 4S. As is arguably the most important one, that for the 298 mile range, which is OK but some way off what you'd get from a rival Tesla Model S. The performance stats are of course very Taycan-like too - which means they're very fast, 62mph from rest occupying just 4.1s; for reference, the faster RS e-tron GT manages it in 3.3s. One of the few dynamic areas in which Ingolstadt could distance this car from its Porsche cousin was the steering, making it lighter than a Taycan and more familiar to customers graduating to this car from another Audi. Various drive modes adjust steering weight - and of course ride comfort too, via the adaptive damping system.

Audi describes the external design of the e-tron GT as 'a work of art'. It's certainly striking, the long wheelbase, wide track, large wheels and low-lying silhouette providing beautifully balanced, sleek and aerodynamic proportions - the drag coefficient is a slippery 0.24Cd. The dimensions are certainly those of a classic Grand Tourer, with a 4.99-metre length and 1.96-metres of width but a height of just 1.41-metres. At the front, the inverted colour scheme of the Singleframe grille provides a clue to the unorthodox powertrain at the car's heart. Big 20-inch wheels offer the requisite dose of pavement presence. Inside, previous R8 owners will recognise the strong 'monoposto'-style driver focus. The upper section of the light, lean instrument panel with its pronounced three-dimensional look forms an elegant arc, and the display of the standard Audi virtual cockpit plus stands freely within it. The driver and front passenger sit low in the cockpit separated by a wide centre console which houses the gear selector switch, its compact design emphasising the sense of space and providing a precise haptic control experience. In the e-tron GT quattro, they are gripped by sport seats with integrated head restraints and electric eight-way adjustment upholstered in a combination of leather and synthetic leather. The rear seats offer sufficient space even for adults, who are able to sit lower and position their feet in what is known as a 'foot garage' thanks to a recess incorporated in the design of the battery pack running beneath the passenger compartment, which effectively compensates for the tapering roof line. Their luggage can be stowed in the rear load area, providing a volume of up to 405-litres, and in a second luggage compartment beneath the bonnet offering a further 81-litres of space.

Prices for the e-tron GT quattro start at around £80,000 for the standard model, though you'll need around £106,000 if you want the much more plushly-equipped 'Vorsprung' version. If you want more power, there's a faster RS e-tron GT model available for around £111,000, with a 'Carbon Black' version available for around £125,000 and a top 'Carbon Vorsprung' version offered for around £133,000. You can go mad with options of course and numerous driver assistance systems are either standard or available at extra cost. The Audi pre sense front and Audi pre sense basic safety systems are standard, as is the lane departure warning system, while other key technologies, including adaptive cruise assist, intersection assist and surround view cameras, are bundled into 'Tour', 'City Assist' and 'Parking Assistance packages. The assist package plus comprises all three and is standard for the e-tron GT 'Vorsprung' and RS e-tron GT 'Carbon Vorsprung', which also add a night vision assistant and a head-up display. A driver assistance highlight is the remote park assist plus feature that forms part of the parking assistance package. It enables the driver to manoeuvre the Audi e-tron GT into and out of a parallel or bay parking space by simply pushing a button, and without needing to be seated in the vehicle. From outside, the process can be activated and supervised via the myAudi app on a smartphone. By keeping the corresponding button pressed, the car will roll into the space, making multiple manoeuvres if necessary, and once in position will switch off the drive system, activate the parking lock and lock the doors. Brilliant.

We mentioned the WLTP-rated driving range earlier - 295 miles, based on an NEDC-rated consumption of 19.6-18.8kWh of energy for every 62 miles travelled. Charging ports can be found behind both front wheels, each side featuring AC connectors, with a DC socket on the right side. As you'd expect, there are two charging cables, a Type 2 Mode 3 AC cable for your garage wallbox and a Type 2 Mode 2 cable for domestic and industrial plugs. The e-tron GT can charge up 11kW AC as standard. There's an optional on board charger available to increase that to 22kW. At a sufficiently powerful DC terminal, this electric coupe can achieve a peak charging capacity of up to 270kW, allowing it to take on board enough charge for a journey of up to 62 miles in just over five minutes. Charging from 5 to 80% state of charge takes less than 23 minutes in ideal conditions from a rapid public charger. Accessing and paying for electricity while on the road can be easily taken care of using the 'e-tron Charging Service', which provides UK subscribers with one RFID payment card that is accepted at a vast number of charge points operated by 18 suppliers across the UK and Europe, and offers a choice of two fixed price charging tariffs.

Whether you choose this e-tron GT rather than its directly comparable Porsche Taycan 4S cousin will of course be very much down to personal preference. Both cars are more appealing than the aging Tesla Model S direct alternative, providing you can put up with a considerably shorter driving range. VW Group EV engineers are feverishly working on this and improvements can't come too soon. Those for whom the current 300 mile figure is sufficient will find much to like here, providing they can afford the premium asking price. There are stand-out looks - and a more visually sumptuous cabin than you get in a Taycan. We'd expected more of a price difference in Audi's favour between the two cars but the e-tron GT quattro shades its cousin on value too, especially once you take specification into account. Here then, finally, is an Audi EV you might really desire. It'll give the brand's sensible e-tron badge some much-needed 'want one' factor.

Fill out the simple form below to get a quote for this Audi E-tron Gt Saloon 390kw Quattro 93kwh 4dr Auto lease.