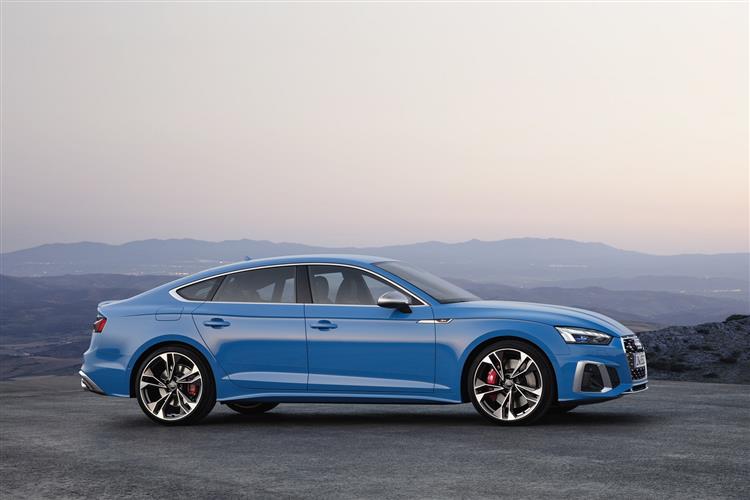 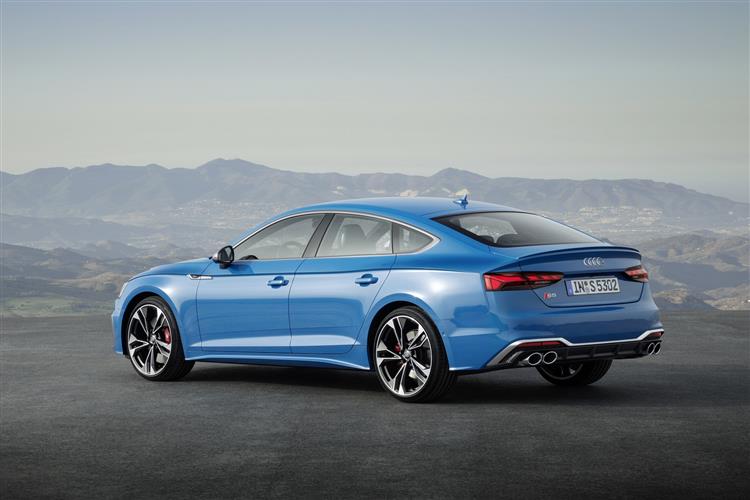 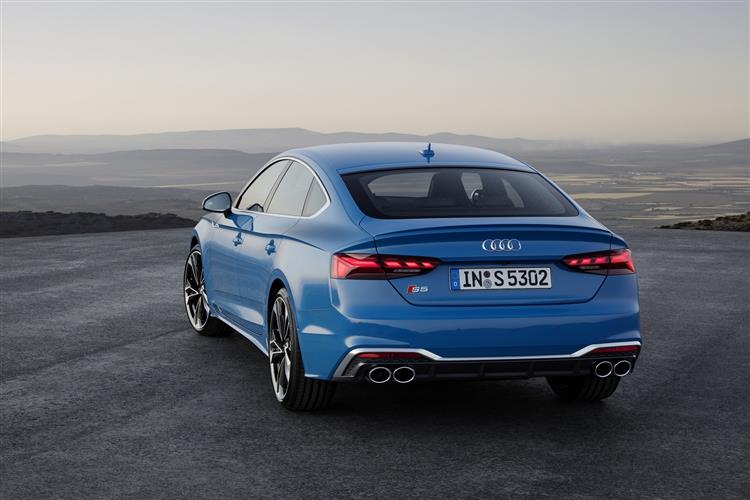 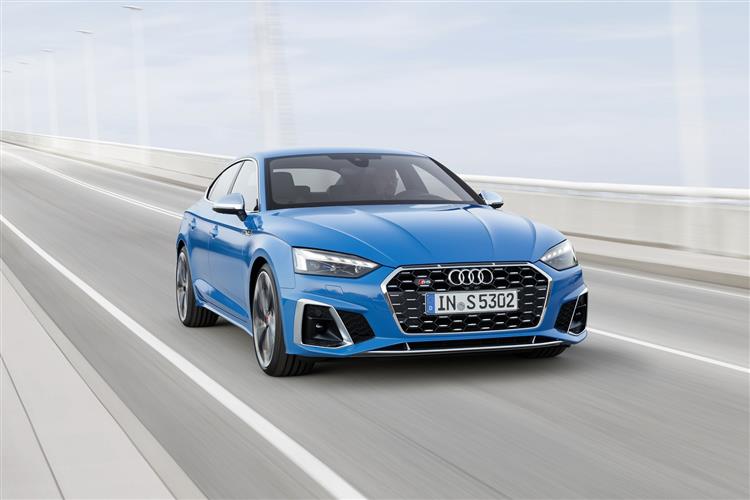 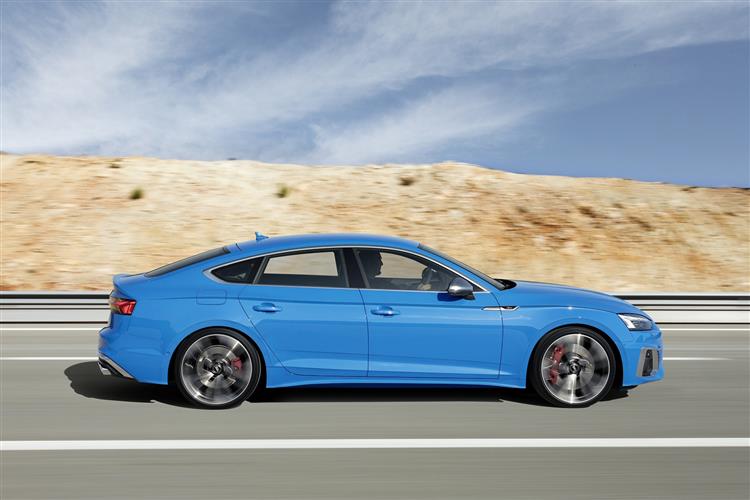 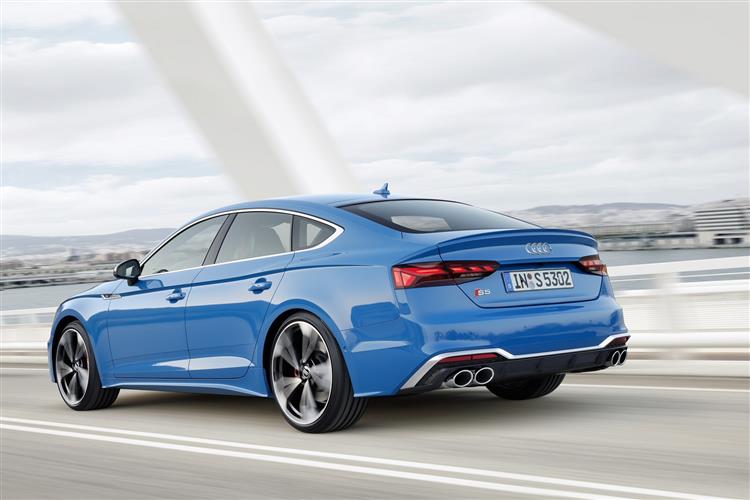 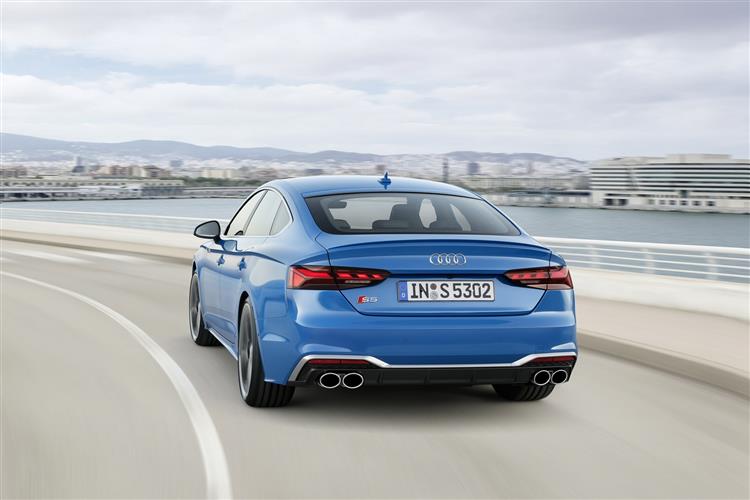 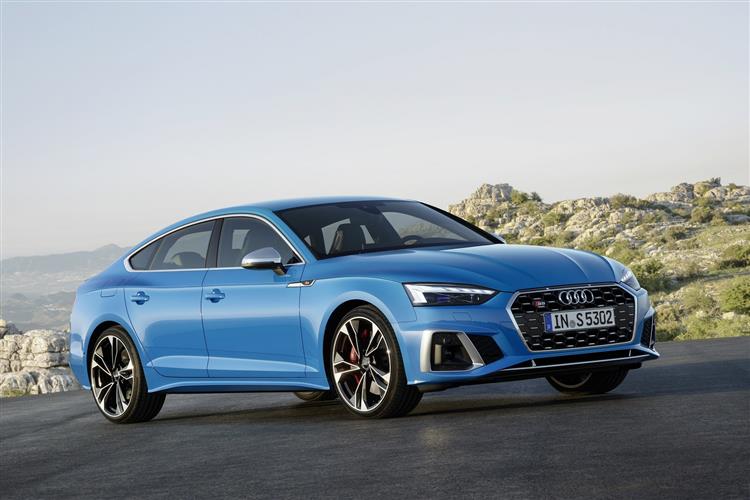 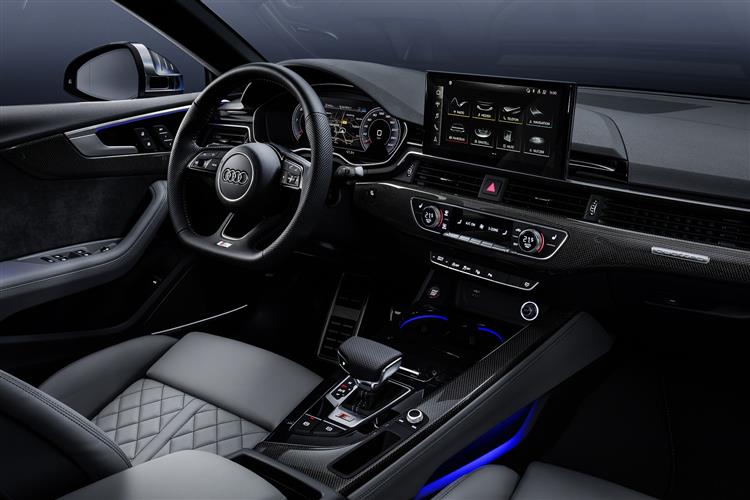 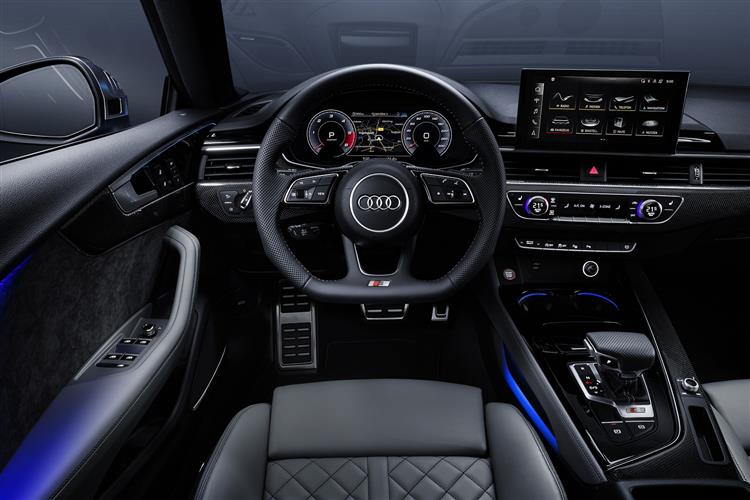 In diesel form, Audi's S5 Sportback has become a far more credible contender in the premium-badged performance segment. Buyers get a significantly more efficient, yet still uber-fast package. A potent turbocharged mild hybrid 347PS 3.0-litre TDI six cylinder unit now features beneath the bonnet. And works in concert with quattro 4WD and a quick-shifting 8-speed sports automatic. It's still perhaps, not the most engaging car of this kind you can buy, but what's been delivered here is a very complete proposition indeed.

S5 Sportback history dates back to 2011. It was at this point that Audi decided the S5 range should henceforth be powered by a 333PS supercharged 3.0-litre V6, replacing the previous 4.2-litre V8. The new engine was first installed in newly created Cabriolet and Sportback S5 derivatives, with the core Coupe S5 model getting this powerplant in 2013. In 2017, Audi launched the second generation A5 Sportback range with a lighter, stiffer MLB chassis and it was time for a new S5 Sportback too. Initially, this car was fitted with a turbocharged 3.0-litre V6 TFSI petrol engine developing 354PS. That unit was replaced in the Spring of 2019 by a mild hybrid 3.0 TDI diesel powerplant, then the car was lightly facelifted in the Autumn of 2019 to create the version we're going to look at here.

So, what's it like? Well don't worry that the switch to diesel power has overly affected performance. The mild hybrid 3.0-litre TDI unit produces 347PS and 700Nm of pulling power, good enough to get this car from rest to 62mph in just 4.9s, which is only a tenth slower than the previous 3.0-litre TFSI V6 petrol unit could manage. Top speed, as before, is artificially pegged at 155mph. The engine utilises a large turbo, which is partly driven by a little electric compressor, as well as exhaust gases. Audi claims that this set-up minimises the effects of turbo lag, with the system being automatically activated whenever the requested engine load exceeds the capabilities of the turbocharger. To go with this change of engine, Audi has upgraded this car in a number of other areas, adding in Progressive steering, refining the sports suspension and incorporating a revised chassis platform, which controls the car's quattro 4WD system. The transmission remains an 8-speed Tiptronic auto unit, but this set-up's impressively quick-reacting and smooth. Not so good is the steering (it still lacks that crucial final enth of feel) and the lowered 'S' Sports suspension will be rather over-firm for some, though you can improve it by paying extra for a 'CDC' 'Continuous Damper Control' system that can be tweaked via the settings of the standard 'drive select' driving dynamics system. As well as also altering steering weight, throttle response and stability control thresholds, the 'drive select' modes can also influence the optional 'sport differential' system, which constantly varies the amount of drive to each of the rear wheels for extra cornering traction.

This improved S5 Sportback shares the visual changes made most recently to lesser variants of this model. The Singleframe honeycomb grille is wider and flatter, and above it ventilation slits reference the classic Audi Sport quattro from 1984. As ever, Audi has been extremely subtle in the aesthetic changes that differentiate this S5 Sportback from any ordinary A5 Sportback model. Certainly, if it weren't for the 'S5' badgework, you'd have to be something of an Audi product expert to tell this car apart from an ordinary 'S line'-trimmed standard variant. The wheelarches house large 19-inch rims and these feature 'S5'-branded black brake callipers, one of the small differentiators that separate the profile aesthetics of the car from those of any ordinary 'S Line'-branded A5. Other unique touches include aluminium-effect door mirror housings, chrome trim on the door handles and, lower down, textured black sill trim tops. Inside, recent revisions have brought an improved 10.1-inch centre-dash screen with acoustic feedback which replaces the rotary pushbutton used in previous models. Like all the latest Audis, this one gets the brand's 'Virtual cockpit' instrument binnacle, a 12.3-inch TFT display that replaces the conventional dials. You'll need some guidance in the elements that set this S5 model apart, since they're not too easy to spot at first glance. The three-spoke sports steering wheel is bespoke and another unique touch lies with the brilliant 'S' Super Sport nappa leather-trimmed seats that feature a lovely quilted finish and pronounced side bolsters. Otherwise, apart from lovely alcantara trimming on the doors and a few elements of S-branding, the ambience is exactly as it would be in any plushly-specified A5 model. As you'd expect, this S5 is as practical as any other A5 Sportback, offering 480-litres of luggage capacity, which is close to the best in this class. The rear seat back splits 40:20:40 as standard.

You'll need a budget of around £50,000 for this S5 Sportback, the same amount as is required for the two-door Coupe version of this car. Both these models come in a single mechanical configuration that sees the same 347PS 3.0-litre TDI engine mated to quattro 4WD and an 8-speed tiptronic auto gearbox. Standard is Audi's top infotainment set-up, 'MMI navigation plus with MMI touch'. It includes such features as 10GB of flash storage, a DVD drive, Audi connect services for three years and an 8.3-inch monitor. Enough on the standard S5 specification. Time to discuss what you can do to embellish it - as almost all owners will undoubtedly want to do. In fact, we'd go as far as saying that to preserve prime used values, there are a few key features you probably really need to have. In a few years time, buyers on the secondhand market are quite possibly going to favour models fitted with optional features like the 'Adaptive 'S' Sport suspension with damping control' set-up that most customers tend to want. Plus ideally, your S5 should be fitted with the optional 'quattro with Sport differential' package that distributes variable amounts of driving force to each rear wheel, improving stability and agility when you take tight corners at speed.

This S5's new mild-hybrid diesel engine uses a 48-volt belt-driven alternator starter, a 0.5kWh lithium-ion battery pack and an energy recuperation system. Audi claims exemplary fuel economy, thanks to a revised engine control unit which shuts off the combustion engine when coasting at speeds between 34mph and 99mph. The engine management system decides in every situation whether coasting, freewheeling or recuperation (the recovery of kinetic energy), is most efficient. It does this using information from the navigation system and the onboard sensors. The energy recovered by the water-cooled belt alternator starter during coasting and braking flows into the 48-volt storage unit or directly to the electrical consumers. When the driver presses the accelerator pedal again after a coasting phase or a stop, the water-cooled belt alternator starter restarts the combustion engine. The system does this as required by the driver's wishes and the situation, from very smoothly to very quickly. Start-stop operation begins at 13mph. When stopped, the engine restarts as soon as the car in front starts to move, even if the brake is depressed. We'll finish by covering the warranty. Most cars in this class get three years of cover, but whereas rival brands BMW and Mercedes don't limit your mileage in this period, Audi rather meanly restricts you to 60,000 miles. Optional extra-cost packages can extend the cover to either four or five years.

You could drive this S5 Sportback for the whole of its motoring life without suspecting the beast that lies beneath its bodywork. Some owners will - and that's a pity for this Audi's split personality can now also promise a remarkably agile driver's car - and a devastatingly quick tarmac cross country tool. In summary then, the S5 in this guise seems finally to have found the right balance between speed and sensibility. If we had to own a car for a week from this segment, it wouldn't be the one we'd choose. If we had to choose one to live with though, it'd be difficult to resist. Audi's S badge always delivered a special experience. Now, it's a properly sporting one too.

Fill out the simple form below to get a quote for this AUDI A5 DIESEL SPORTBACK S5 TDI Quattro Vorsprung 5dr Tiptronic lease.