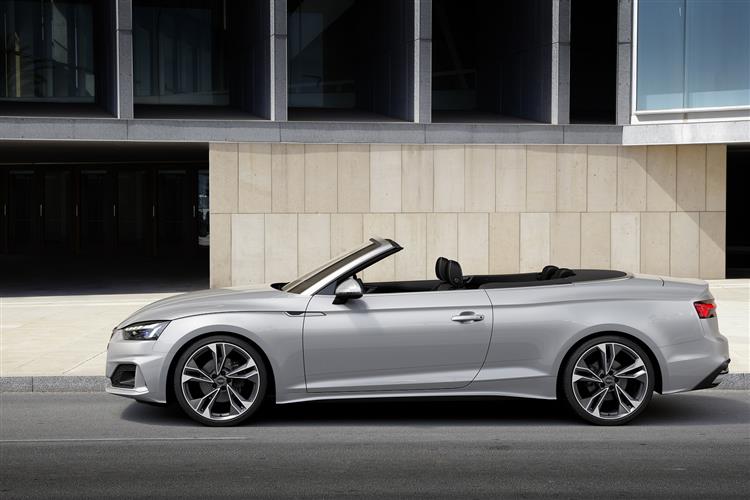 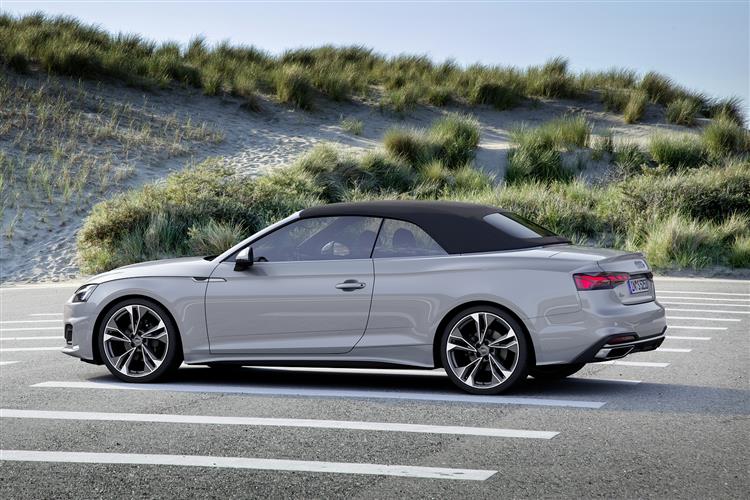 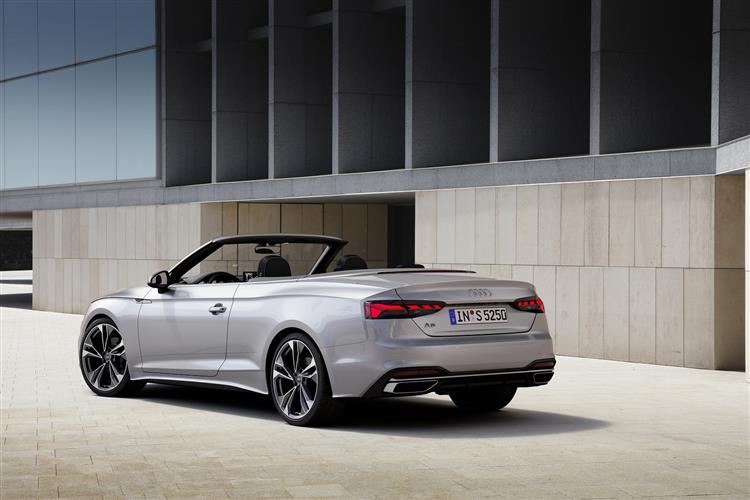 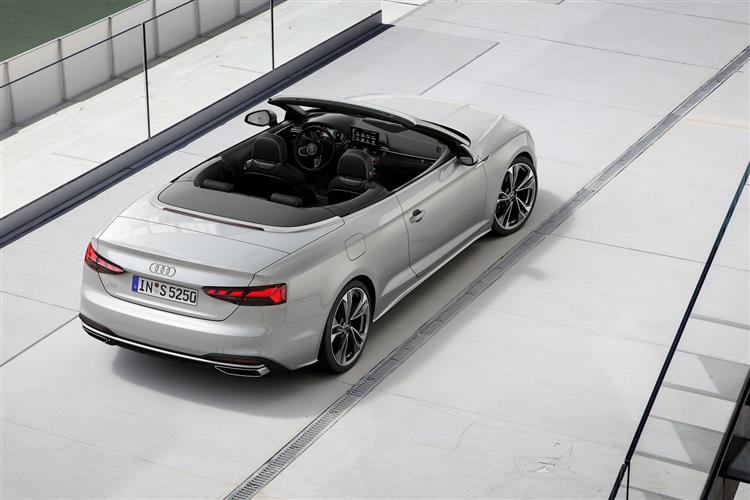 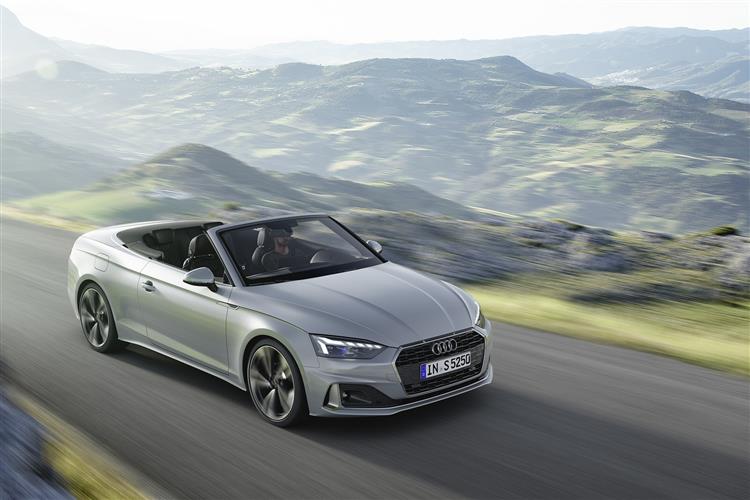 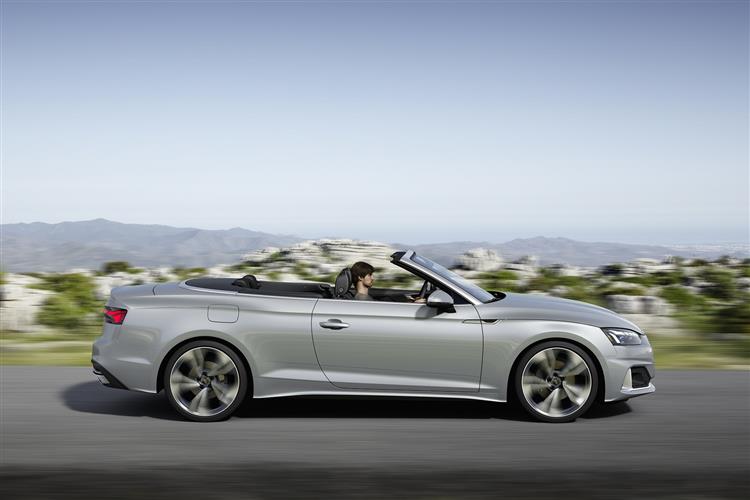 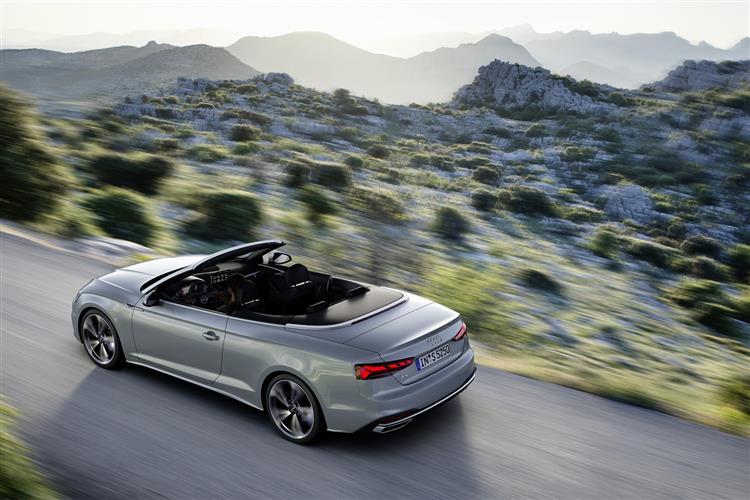 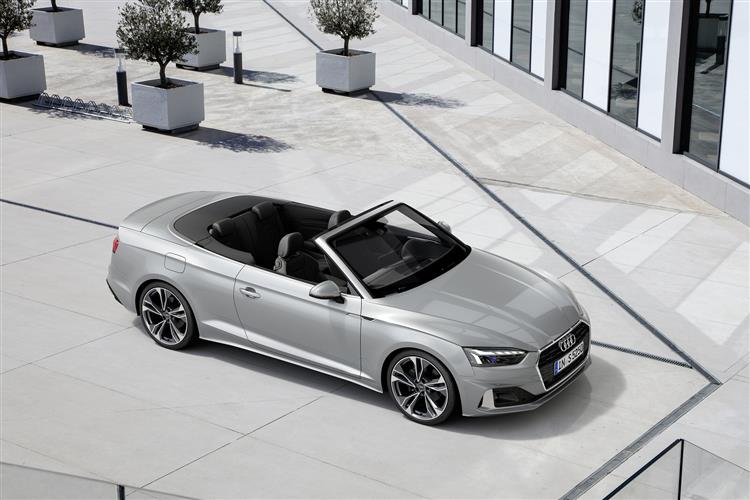 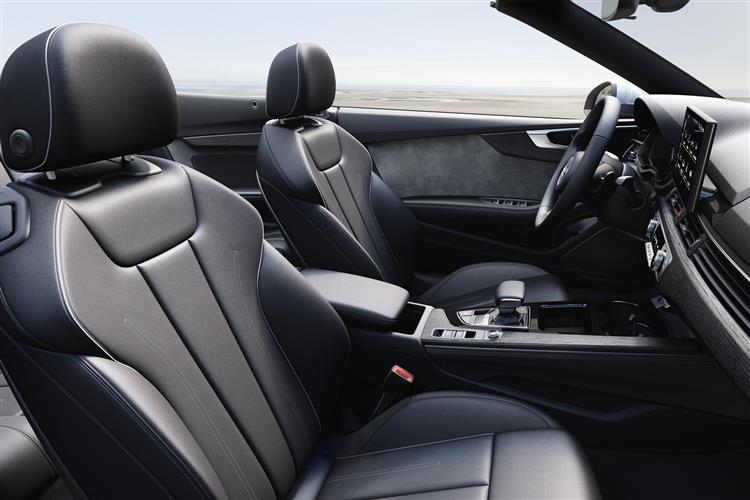 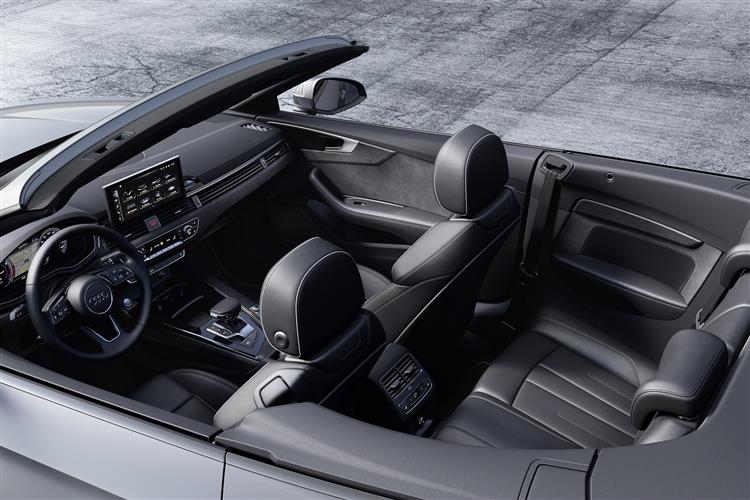 Audi didn't really need to improve its A5 Cabriolet, but it has done anyway. This revised version of the second generation version model is smarter to llok at and incorporates the option of more frugal mild hybrid engine technology. Inside, you'll find a classier cabin with Audi's 'Virtual Cockpit' instrument binnacle. And a beautifully integrated fabric roof means almost coupe-like standards of refinement.

For a certain kind of customer, the combination of the Audi badge and a pretty convertible bodyshape seems to be difficult to resist. We saw it with Princess Diana and her Audi Cabriolet in the early Nineties. Then with the huge success of the handsome A4 Cabriolet which dominated the executive drop-top sector in the early years of this century. When Audi's pretty A5 Cabriolet first appeared in 2010, it was an evolutionary step forward from that car. Like its predecessors, the A5 drop-top ignored the prevailing trend for folding metal hard-tops and was smart, relatively practical and very cool. But that didn't mean it couldn't be improved upon and at the end of 2016, Audi duly did just that, announcing this MK2 model, here usefully improved. It's still beautifully built and lovely to look at but is now an even more accomplished way to enjoy the best - and worst - that the British weather can offer.

As a general rule, if you own an executive-class convertible, you probably don't drive it too fast. By cruising along, there's a far better chance you'll be spotted by desirable members of the opposite sex and thus fulfil the primary purpose of this type of car. Of course, should the rain be prevailing or the streets be deserted, Audi has been kind enough to build in some potential for fun. There's a range of three 2.0-litre TFSI petrol versions - 35 TFSI 150PS variant, a 204PS 40 TFSI model and a 265PS 45 TFSI derivative that can only be had with quattro four-wheel drive. The diesel option is the 40 TDI quattro which offers 204PS. Audi equips its petrol variants with a mild hybrid system. Here, a belt alternator starter, which is connected to the crankshaft, recovers energy during deceleration and stores this in a compact lithium-ion battery. The MHEV system is integrated into the 12-volt electrical system and a 7-speed S tronic auto gearbox is mandatory. Adaptive dampers are available as an option. They are incorporated into the standard Audi drive select dynamic handling system and allow the driver to choose between a performance driving bias or a more comfort-oriented profile. The electromechanical power steering offers decent feedback from the road and reasonable steering precision. As an option, dynamic steering which varies its gear ratio depending on the speed and steering angle is available.

As before, this convertible is based on the A5 Coupe and as with recent versions of that car, the exterior here has actually been significantly revised, with the front end in particular, delivering considerably more visual impact. The Singleframe honeycomb grille is wider and flatter, and above it ventilation slits reference the classic Audi Sport quattro from 1984. A bold blade forms the lower edge of the bumper, which features larger air inlets. A new sill provides for a slimmer appearance when viewed from the side, while at the rear a diffuser insert with trapezoidal tailpipes makes the car appear wider. The acoustic fabric soft top fits as perfectly as you would expect and can be operated with a useful one-touch opening function (why has no one done that before?). Here, a flick of the switch is all it takes to open the soft top fully automatically in 15 seconds or close it in 18 seconds at speeds of up to 31mph. When the top is down, bootspace reduces by 60-litres. When it's up, you get the same 380-litre capacity that the previous version of this model could offer. Horizontal lines also dominate the interior of this improved A5 Cabrio. The large MMI touch display, the control centre of the car's redesigned operating system, is the focal point of the instrument panel and angled slightly toward the driver. It offers a user experience similar to a contemporary smartphone via a 10.1-inch touch display with acoustic feedback which replaces the rotary pushbutton used in previous models. Like all the latest Audis, this one gets the brand's 'Virtual Cockpit' instrument binnacle, a 12.3-inch TFT display that replaces the conventional dials.

You can expect prices to sit in the same £40,000 to £62,000 bracket as this model's two most obvious rivals, the Mercedes C-Class Cabriolet and the BMW 4 Series Convertible. As for gearboxes, well Audi offers a choice of seven-speed S tronic dual-clutch transmission or an eight-speed auto tiptronic set-up, plus there's quattro 4WD if you want it. There are three main trim levels, 'Sport', 'S line' and 'Vorsprung'. All models come well equipped, every trim grade featuring xenon headlights with LED daytime running lights and LED rear lights, an 'Audi MMI Navigation Plus with MMI Touch' infotainment system with a 10.1-inch colour display, Bluetooth, a three-spoke leather multifunction steering wheel, a front centre armrest, a folding rear seat back with a 50:50 split, and LED interior lighting. Also standard are the Audi drive select dynamic handling system, the Audi pre sense city and multicollision brake assist safety systems, and a variable speed limiter. Also now standard is the desirable 'Audi Virtual Cockpit' TFT instrument binnacle, with its 12.3-inch screen and advanced graphics. Plus even with entry-level 'Sport' trim, you get alloy wheels of at least 18-inches in size and front sports seats in 'Twin' leather. A Head-up display can be ordered at extra cost.

This A5 Cabriolet's new mild-hybrid diesel engine uses a 12-volt or 48-volt belt-driven alternator starter, a 0.5kWh lithium-ion battery pack and an energy recuperation system. Audi claims exemplary fuel economy, thanks to a revised engine control unit which shuts off the combustion engine when coasting at speeds between 34mph and 99mph. The engine management system decides in every situation whether coasting, freewheeling or recuperation (the recovery of kinetic energy), is most efficient. It does this using information from the navigation system and the onboard sensors. Let's get to the WLTP figures. The mainstream 35 TFSI and 40 TFSI petrol models manage up to 40.4mpg on the combined cycle and up to 160g/km of CO2. For the 45 TFSI, it's up to 33.2mpg and 193g/km. For the 40 TDI quttro diesel, iti's up to 48.7mpg and 152g/km. Of course, the driver will have to do his or her part. Helping here is the clever 'Predictive efficiency assist' system that could potentially improve your fuel economy by as much as 10%. It works with the Navigation package and analyses any given route, once set, to decide how the journey could be undertaken more efficiently, taking into account things like the speed limits, traffic signs, bends and roundabouts you'll be encountering along the way. The set-up then offers driving tips that'll help you achieve that: perhaps, for example, a junction is out of your sight around the next bend and you could take your foot off the accelerator a little earlier. Get onto the motorway and with the optional Adaptive Cruise Control system activated, 'Predictive efficiency assist' will automatically make all the frugal driving adjustments for you. If it knows you're going to be travelling for a few junctions, it'll even disengage the engine at cruising speeds for greater efficiency, then re-engage it immediately and almost seamlessly when you either accelerate or brake.

Executive class Audi convertible models have been highly successful for the brand down the years and this second generation A5 Cabriolet continues that trend. In many ways, the recipe is much the same, Audi's cool brand image, stylish design language and slick interiors coupled with an expertly engineered fabric hood and a range of thrusting engines that are now more efficient than ever. It's not difficult to see this car's appeal. Most A5 Cabriolet customers will have decided they want one long before they take a seat behind the wheel. The Cabriolet line has become something of an Audi icon and there will be no shortage of people willing to sign on the dotted line for the car simply because this is the latest instalment. Happily, it looks as though there's plenty of substance beneath the marketing veneer and those seduced by the image should luck into the premium convertible that the others have to beat.

Fill out the simple form below to get a quote for this Audi A5 Cabriolet Special Editions 40 Tfsi Edition 1 2dr S Tronic lease.