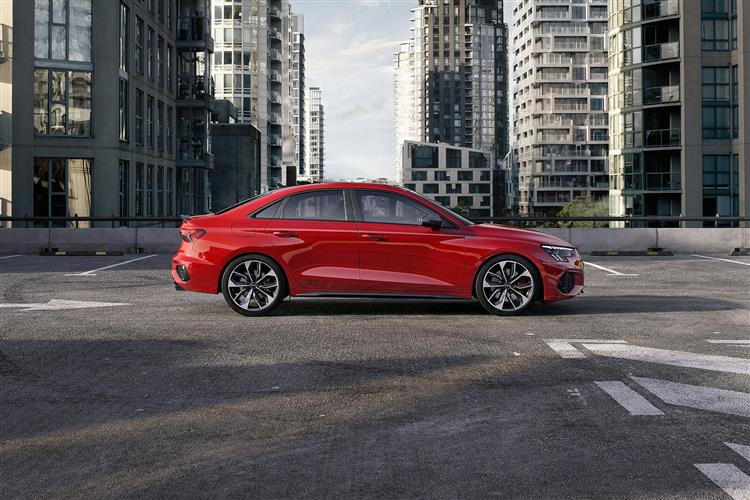 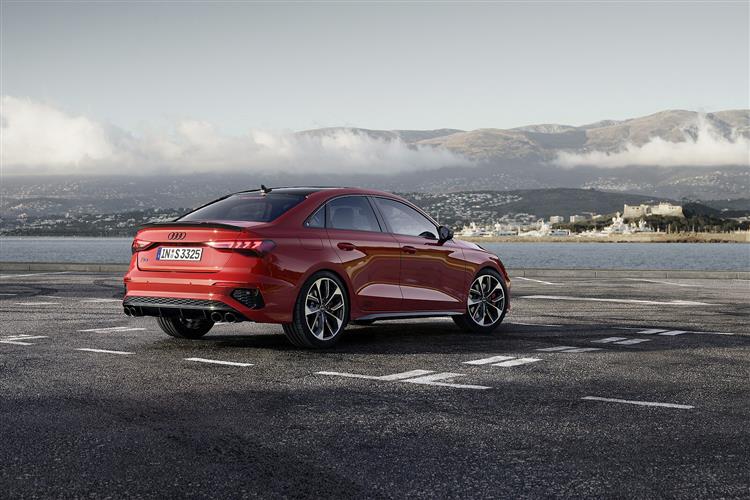 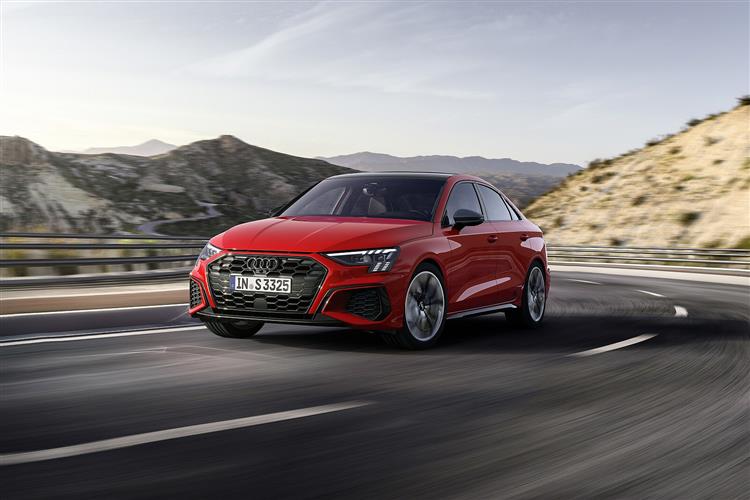 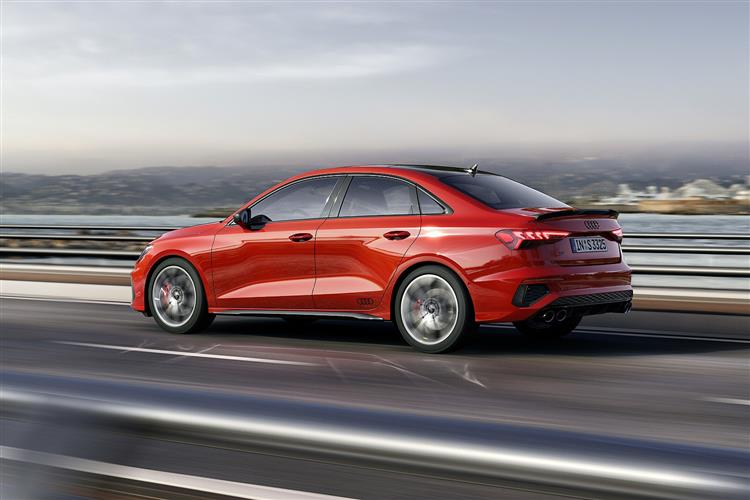 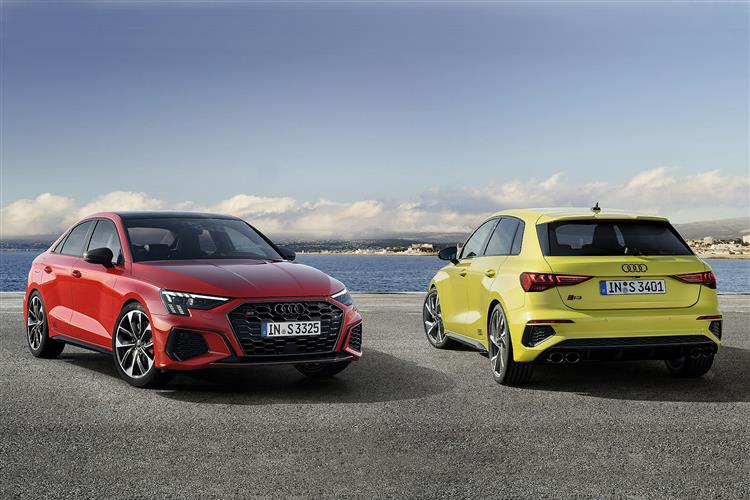 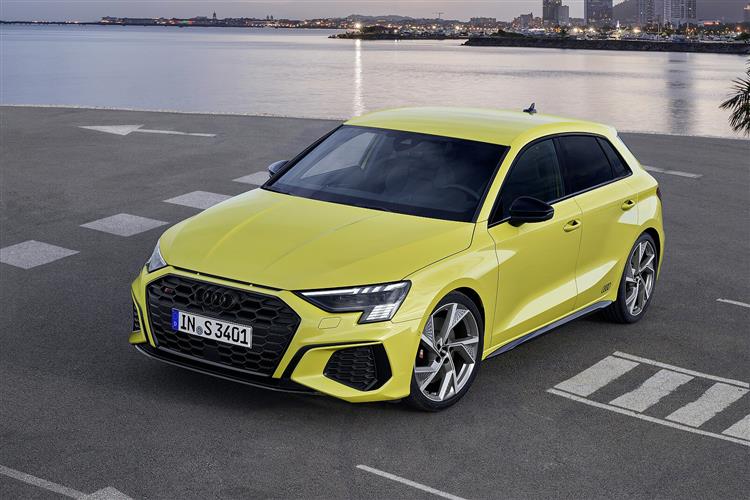 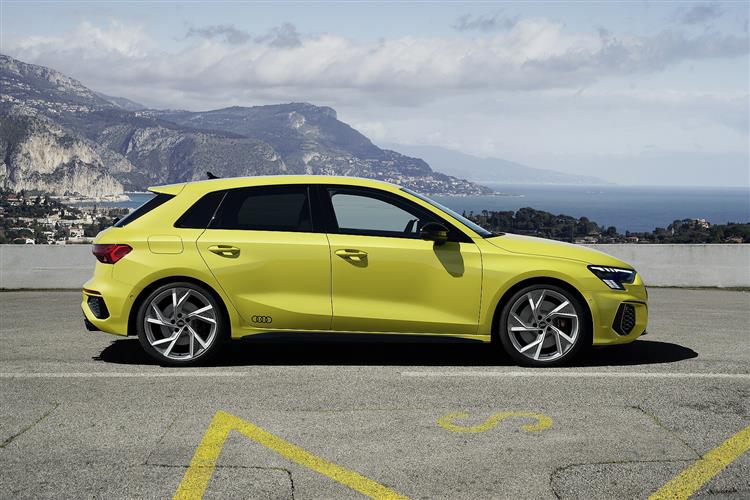 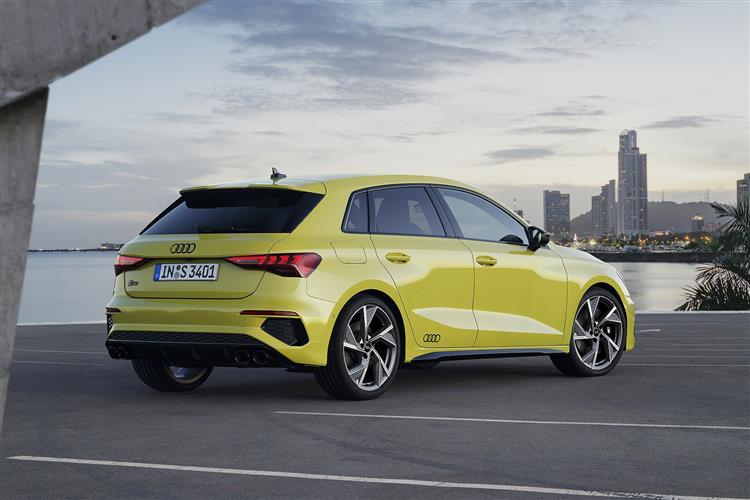 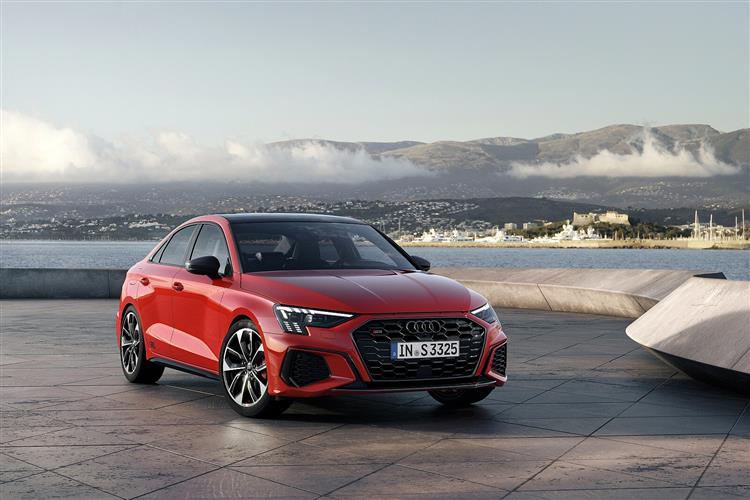 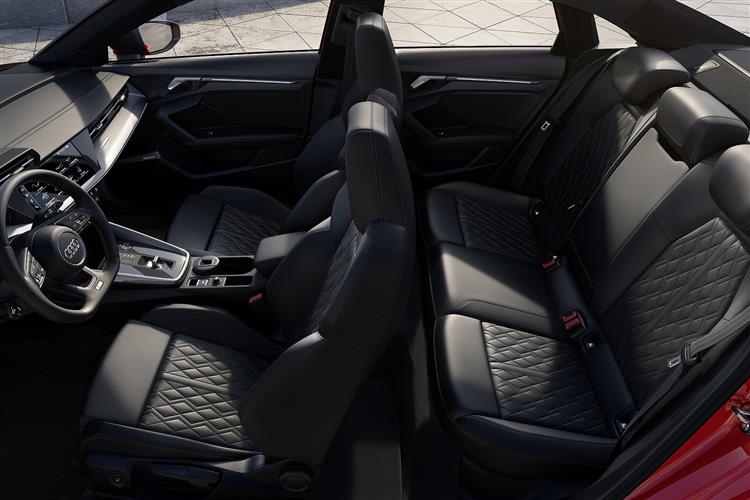 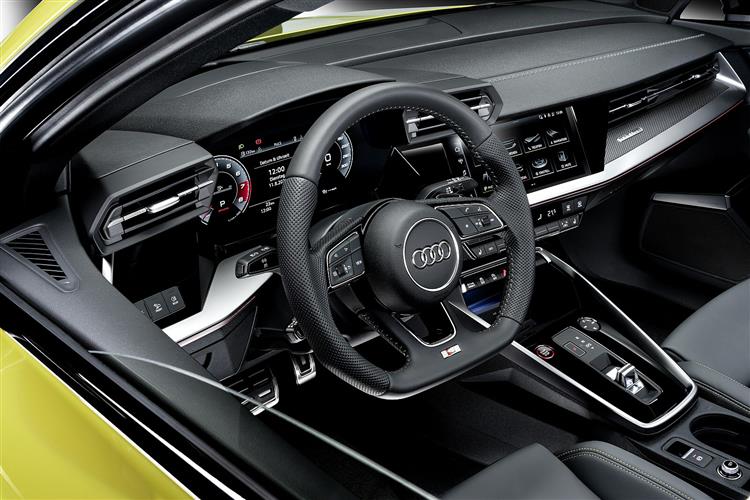 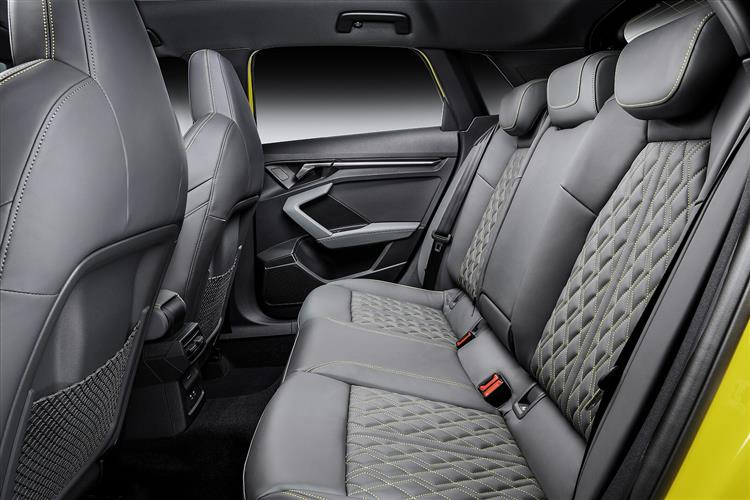 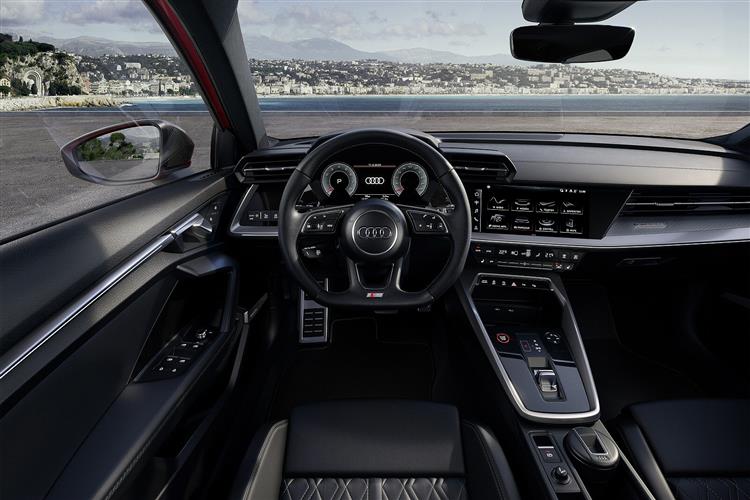 Audi's S3 has always championed subtlety, but over the years, some have seen this car's driving dynamics as being perhaps a touch too subtle. Those people might like this fourth generation version, with offers sharper looks, improved Quattro traction and enhanced adaptive damping, along with an even more appealing cabin. All without delivering the kind of showy exuberance of some of its rivals. There's a choice of five-door Sportback or Saloon body styles and either way, you get a very complete 310PS performance package that's cool, understated and very Audi.

Once upon a time, a hot hatch didn't have to be a mature, sensible thing. That wasn't the point of buying one. You got a shopping rocket because it was fun - with just enough practicality to enable you to justify the purchase to your other half. With the S3 though, it was different. Here was an aspirational premium GTi with a price tag to match. A hot hatch for people who ordinarily, would have grown out of hot hatches We first saw it way back in 1999 at a launch over-shadowed by an Audi TT sportscar that shared the S3's quattro 4WD system and got a slightly pokier version of its 2.0-litre turbocharged unit. That's a basic mechanical configuration the German brand has stuck to ever since - but of course power has spiralled since then. The early 210PS output figure was quickly upgraded to 225PS in the first generation version, then boosted again to 265PS for the MK2 model introduced in 2006. By 2013 though, it was clear that even that kind of power was going to be insufficient for admission into the premier league of hot hatches, so the 2.0-litre turbo engine was redeveloped from the ground up to make 300PS and plumbed into the lighter, stiffer MQB platform that had offered so much extra agility and efficiency to more mundane third generation A3 models. A lot's changed though, since 2013 in the super hatch segment. Cars like the Mercedes-AMG A 35 and latest versions of the BMW M135i and Honda Civic Type R now offer buyers arguably more exciting ways to own a practical 4WD sporting car with around 300PS at this price point. So Audi has done what it can to make Sportback and Saloon versions of this S3 a lot smarter and a little more engaging to drive.

At first glance, you might wonder what's really changed here. The EA888 2.0-litre TFSI petrol turbo powerplant is the same as that used in final versions of the previous generation model and offers the same 310PS output, with 400NM of pulling power. You'll find basically the same engine used right across the VW Group in products as diverse as the Skoda Octavia vRS, the Volkswagen T-Roc R and the CUPRA Ateca, usually allied to 4WD. That quattro system has now been lightly revised, along with a switch in functionality for the optional adaptive damping system. That suspension change is probably the most significant alteration here. The previous 'Magnetic Ride' set-up, Audi now says, was 'a bit too sporty' and has been replaced by hydraulic adaptive damping governed by a central control unit that also oversees the 4WD and torque-vectoring-by-braking systems. All of which should continue to make this car superbly easy to drive quickly and precisely. 62mph from rest occupies just 4.8 seconds on the way to a top speed that has to be limited to 155mph. And the engine note changes with the mode you choose from the standard Audi drive select system - relatively hushed for everyday journeys and long distance cruising; and crisper and more bass-heavy for more challenging drives.

To start with, there's a choice of two S3 body styles - 5-door Sportback and 4-door Saloon. Either way, the front is dominated by the usual Audi Singleframe grille with its large rhombus-patterned grille and purposeful air inlets, this adornment flanked by LED headlights with LED daytime running lights. The pronounced shoulder line extends from the headlights to the rear lights, below which the body curves inwards - a fresh element of Audi design that places a stronger emphasis on the wheel arches. Aluminium door mirror surrounds confirm membership of the S Series. And at the rear, there's a large diffuser and four trademark exhaust tailpipes. Compared to its predecessor, the S3 Sportback is 3cms longer and wider than before; the Saloon version is 4cms longer and 2cms wider. That's allowed for slightly greater interior shoulder room and elbow room than the previous models. Other changes inside include the provision of re-designed nappa leather-upholstered sports seats. And a revised 10.1-inch MMI Navigation Plus centre-dash infotainment screen, with connectivity features delivered at LTE Advanced speed. The 10.25-inch Audi Virtual Cockpit digital instrument binnacle screen is now standard. The rear seat is comfortable for two adults but can't slide as it would in Audi's alternative RS Q3. Boot space is compromised by the 4WD system and is rated at 370-litres for the saloon or 325-litres for the Sportback, the latter offering a seats-down total of 1,145-litres.

Let's get to the pricing, pitched from launch at around £38,000 for the S3 Sportback, with a further £500 premium for the alternative Saloon variant. To give you some class perspective, a competing Mercedes-AMG A 35 4MATIC would cost fraction more, while a BMW M135i xDrive would cost fraction less. We'd hoped that the asking figures this time round might have included the adaptive damping system that most S3 customers want, but that variable set-up - Audi calls it 'S suspension with damper control' - is standard only on the priciest 'Vorsprung' trim level. Otherwise you'll have to stay with standard S-specific passive suspension, unless you pay more. Standard equipment includes the sports styling and interior features described in our 'Design' section. And all S3 models get a complete portfolio of standard camera safety kit. Audi pre sense front, swerve assist with turn assist and lane departure warning all have the potential to prevent accidents. S3 'Vorsprung' models expand on this list with features such as lane change and exit warnings, the rear cross-traffic and park assist systems and adaptive cruise assist, which maintains the speed and distance to the vehicle in front and assists with lane guidance by means of gentle interventions in the steering.

The Audi S3 is never going to be a notably cheap car to run. You don't buy a 310PS all-wheel drive petrol-powered sports car that wears a ritzy badge if counting the pennies is your prime motivation, but the S3 shouldn't be a ruinously expensive ownership experience either. The outgoing model was always a low depreciator, used buyers attracted to the smart image and surprisingly modest fuel thirst. The latest S3 certainly prioritises efficiency in its engineering. High-tech features like the Audi valvelift system (which adjusts the lift of the intake valves as required to ensure optimum combustion chamber filling) and comprehensive thermal management measures, help to strike this impressive balance between ebullience and efficiency. As does the seven-speed S tronic paddleshift auto gearbox, with its lightning-fast gear shifts and economy-conscious freewheeling function. As a result, this car in both its forms is capable of a pretty impressive set of WLTP-rated efficiency figures; 34.9mpg on the combined cycle, with a CO2 reading of up to 183g/km.

No one actually needs an S3 - but then no one actually needs a hot hatch either - so if you can afford to get yourself a shopping rocket, why not buy one that makes you feel the way this car does? It's certainly the sort of sports hatch that might well appeal if you owned all the loudest and fastest GTIs in the Nineties and Noughties and now just want something that can do it all without drawing attention to itself. This fourth generation version delivers this subtlety with a little more driving involvement, but there are still critics who'll point out that it could be more engaging - that it could grab you a little more by the scruff of the neck. In some ways though, pointing that out probably says more about the tester than the S3. To be frank, it never has been that sort of ride. Where this car still scores is in its massive capability and its beautifully engineered feel-good factor. The joy of ownership here doesn't necessarily come from clipping apexes at the limit of grip, although the S3 will indulge you in that way if you want. Instead, it comes from owning something jewel-like and exclusive, a very, very quick car that doesn't overly-immerse you in the business of going... well... very, very quickly. The thinking person's superhatch? You're looking at it right here.

Fill out the simple form below to get a quote for this Audi A3 Sportback S3 Tfsi Quattro 5dr S Tronic lease.