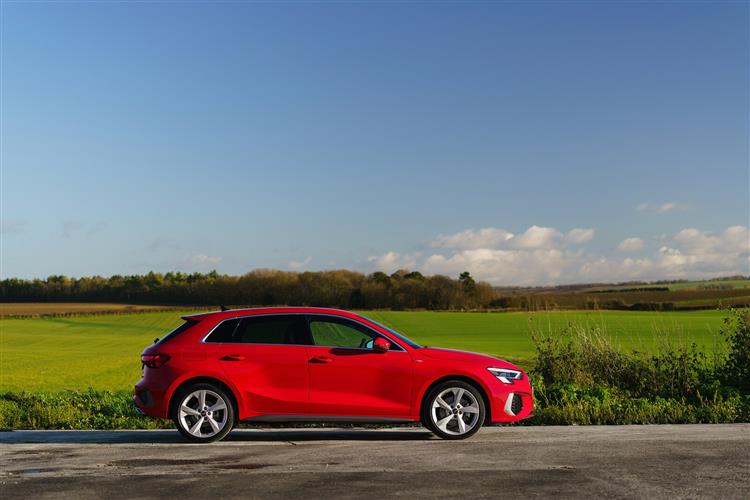 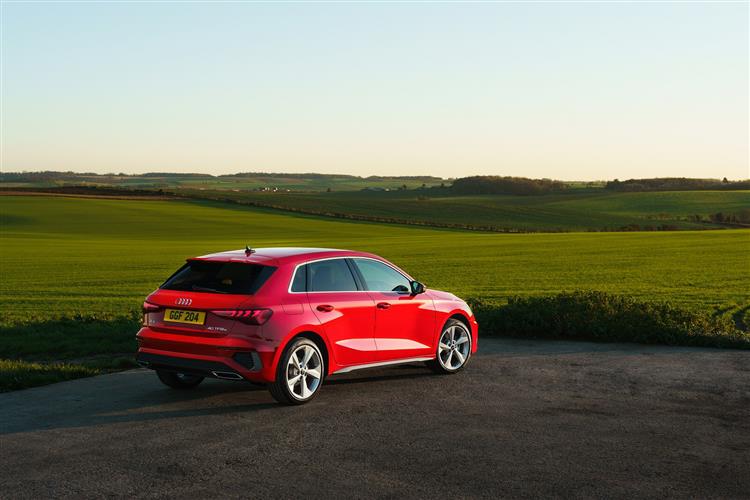 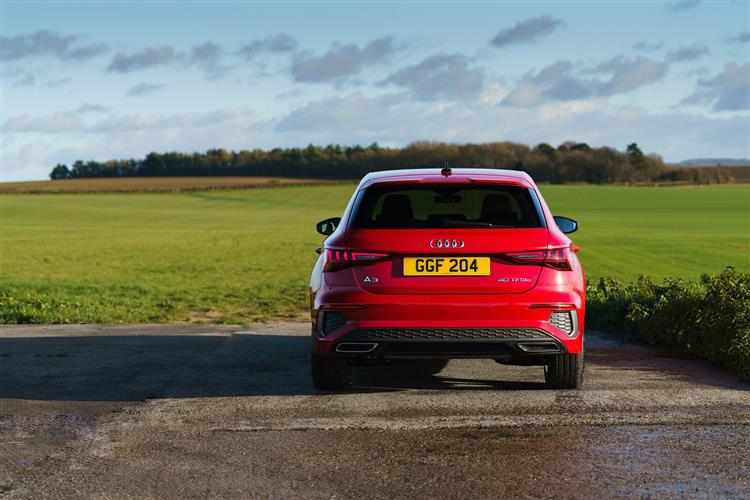 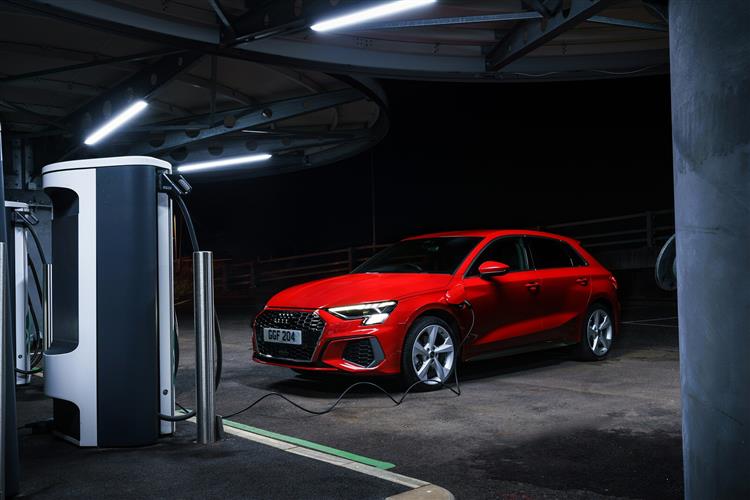 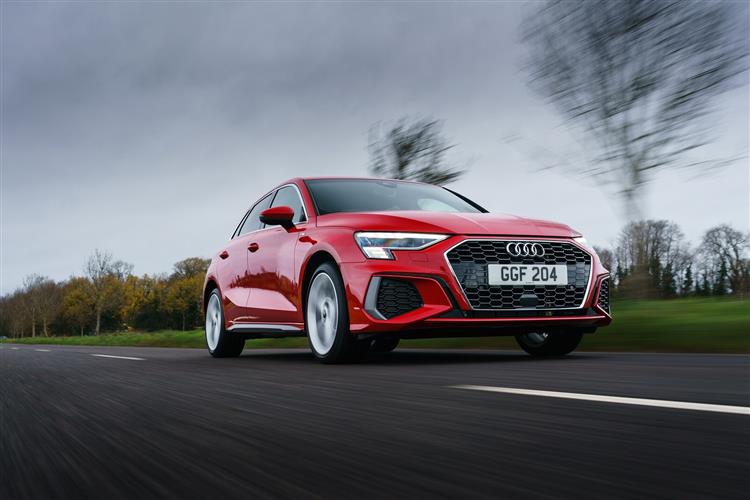 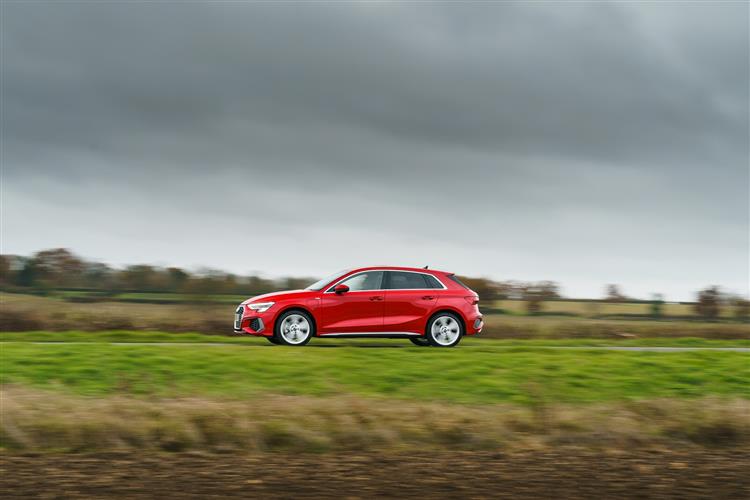 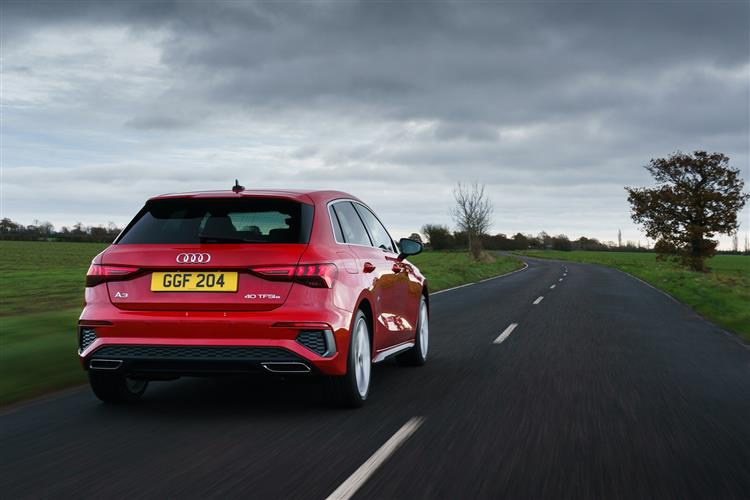 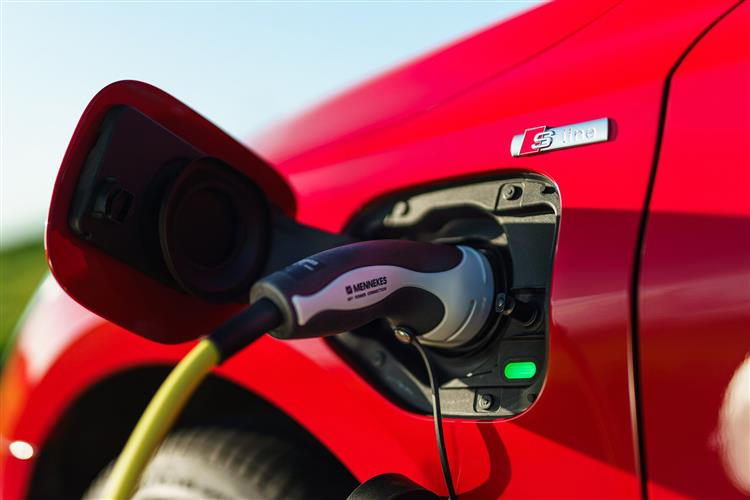 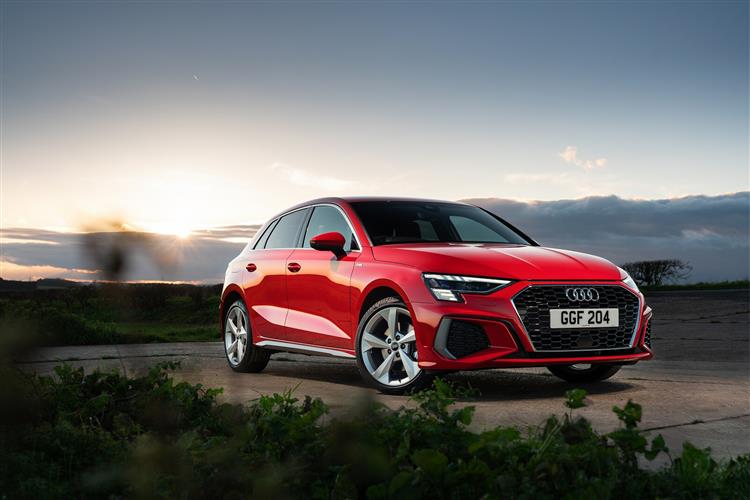 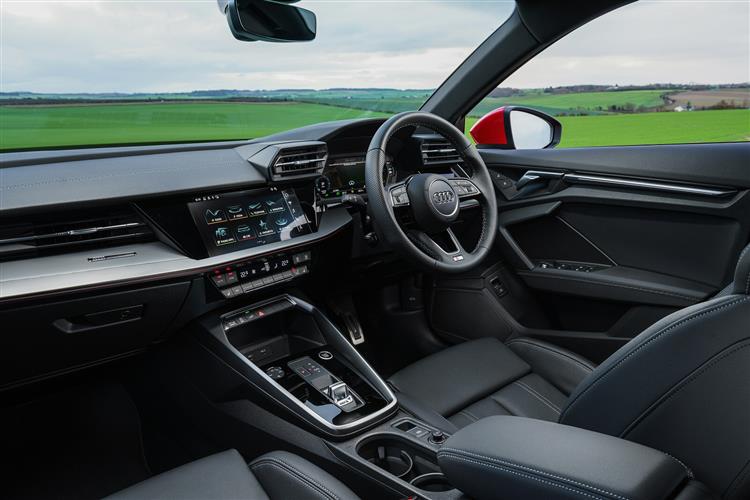 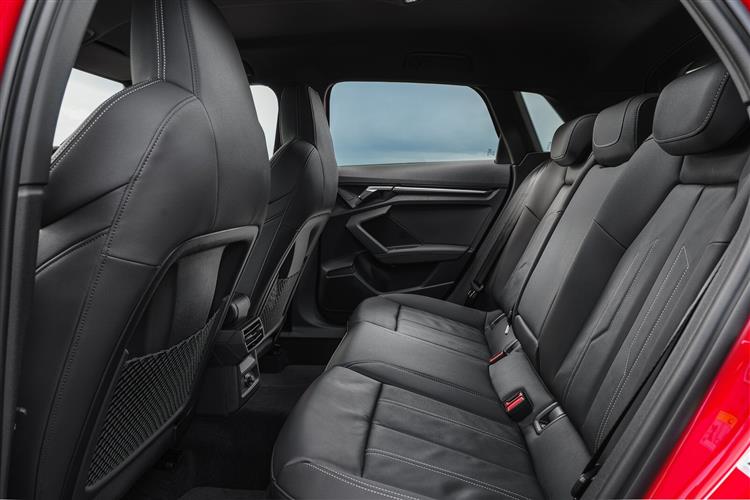 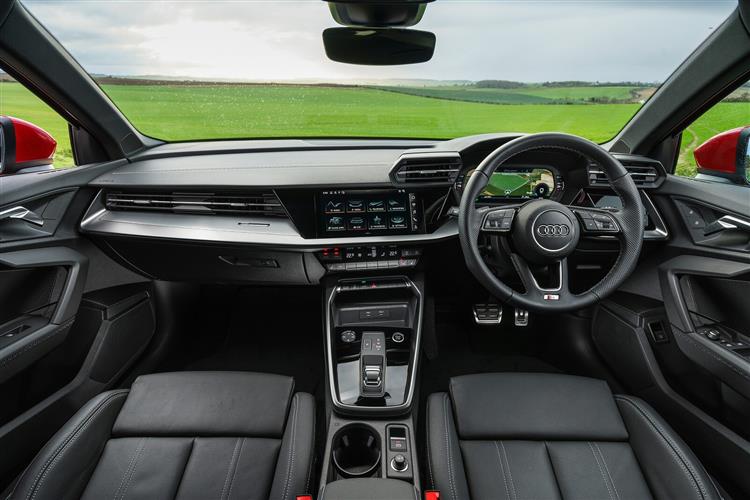 The Audi A3 40 TFSIe plug-in hybrid makes some interesting numbers. It's claimed to return 282.5mpg, emit 31g/km of CO2 and get to 62mph in just 7.6 seconds. Real world economy is around a third of this number, and the asking price isn't inexpensive but this is a very complete piece of Ingolstadt engineering.

It'll be interesting to see how long the Plug-in Hybrid era lasts. Some European governments say they're already looking to ban cars like these by 2035 - which seems a bit premature, particularly as PHEV tech is now really getting into gear. To an extent showcased in the premium compact hatch segment by this car, the Audi A3 Sportback 40 TFSIe. As you might know if you ran an example of this variant's direct predecessor, the A3 e-tron, plug-in models of this kind have a history of providing fairly feeble levels of all-electric range. The 40 TFSIe though, has a much bigger lithium-ion battery than that old e-tron model could offer and the result is a far more usable 41 mile WLTP-rated level of range - for lower-spec variants at least (the larger 18-inch wheels of 'S line' trim drop that figure to 37 miles).

Conventional A3 Sportbacks offer a degree of electrification but the mild hybrid lower order petrol versions of this car aren't proper hybrids. If you want an A3 that is, you'll need the PHEV model, almost certainly the '40 TFSIe' variant we look at here. This plug-in hybrid borrows its drivetrain from a PHEV segment pioneer, Volkswagen's Golf GTE, which means a 150PS 1.4-litre TSI petrol engine mated to a 6-speed DSG auto gearbox. The 85kW electric motor this package works with is mated to a 13kWh lithium-ion battery that when fully charged can offer a WLTP-rated all-electric driving range of up to 41 miles. And a (rather academic) all-electric top speed of up to 80mph. Rely primarily on petrol power and the 62mph sprint occupies just 7.6s en route to 141mph. If you want to go faster in an A3 PHEV, you can talk to your Audi Centre about an alternative '45 TFSIe S line Competition' variant with a combined system output of 245PS - the same as a Golf GTI. Otherwise, it's just like any other A3 Sportback to drive. Differences with this MK4 design initially seem quite subtle, primarily centred around slightly sharper steering and handling that's now a little more responsive. That's thanks to a wider track and the introduction of a 'modular dynamic handling control system' that, based on steering movements, predictively co-ordinates interplay between all the car's dynamic systems - like a conductor with an orchestra - so the car can always be one step ahead of the drive inputs you want to make.

The 40 TFSIe is offered in the five-door A3 Sportback body and doesn't look a whole lot different to any other Sportback. There's some subtle badging at the back and the charging point is typically Audi-slick. Inside up front, there's an immersive style of ergonomic design - in the way the air vents combine with the instrument binnacle and the manner in which the centre screen and the re-designed climate controls just below have been canted towards the driver. Much effort has gone in to visually emphasise the width and spaciousness of this cabin, most notably with precise horizontal lines and surfaces. And you're going to really like the quality and classy design on show here. There's also what Audi calls a 'new level' of digital technology, a 10.25-inch Virtual Cockpit instrument binnacle display standardised and working in concert with a 10.1-inch 'MMI Navigation plus' centre stack monitor. Audi claims that this MK4 A3 Sportback's slight dimensional exterior size increase benefits passengers directly and, sure enough, they get more elbow room at the front and rear and more shoulder room in the rear. Headroom in the front's better too - though only because the driver's seat has been positioned a little lower for a slightly sportier feel. Out back, boot space falls from 380-litres in the standard model to just 280-litres in this one thanks to the battery pack beneath the floor.

The big issue for most buyers is whether they see this A3 40 TFSIe variant's £33,000 asking price as being justifiable when a 35 TDI 150PS diesel A3 Sportback model will typically cost around £4,000 less. That four grand would buy you a lot of black pump fuel. In terms of pure hard-headed finance, it's going to find it hard to justify sales against a diesel; in the short to medium term at least. 'Sport' and 'S line' versions of the A3 Sportback 40 TFSIe are factory fitted with 17-inch and 18-inch alloy wheels respectively, but as wheel size can bring about minor variations in the compact hatchback's electric-only driving range, customers have the option to go up or down in size depending on their preferences. Thus the 'S line' can be fitted with a 17-inch wheel as a no cost option so business users can still qualify for the six per cent BIK banding.The wheels are carefully controlled by a sophisticated multi-link suspension system combining refined ride comfort that complements the plug-in hybrid's hushed electric-only cruising with excellent stability and composure for occasions when the full 204PS output is put to good use on more challenging roads. By the way, you'll pay from around £36,500 for the more powerful 245PS 45 TFSIe model, which comes only in fully-specced 'S line Competition' trim.

With 17-inch wheels, the quoted WLTP stats for a 40 TFSIe model are a fantasy land combined cycle fuel figure of 282.5mpg and a CO2 reading of up to 31g/km. That latter stat means a Benefit-in-Kind tax rating of just 6% (or 10% if you specify 'S line' trim with the larger 18-inch wheels). In comparison to a conventional 35 TFSI model, that'll cut your BiK tax payments by as much as 75%. At the time of this test in Autumn 2020, that meant a £792 annual outlay for a typical tax payer running a 40 TFSIe 'Sport' model, as opposed to the £3,200 per year that he or she would have shelled out running the equivalent 35 TFSI Sport variant. Do the maths and you'll find that means a saving of almost £10,000 over four years for a 40% tax payer; you can see the attraction. The downside with this fourth generation A3's evolved PHEV technology is that the extra cells inevitably take a bit longer to charge - think 4-5 hours when using an AC wall box in your garage (rated at 3.6kW and above). Because this Plug-in variant's onboard charging capacity was, from launch, limited to just 2.9kW, hooking the car up to the kind of 7kW garage wallbox you'd use for a full-EV won't make this Audi charge any faster, but future model updates might change that.

Although the headline numbers of 282.5mpg, 31g/km of CO2 and a 0-62mph time of just 7.6 seconds make the Audi A3 40 TFSIe appear quite a game-changer, look behind the numbers and you'll find things not quite so clear cut. In fact, a counter perspective might well be that you're paying around £4,000 over the top of an A3 Sportback 35 TDI 150PS diesel and getting a car that's slower, drinks more fuel, carries less luggage, offers inferior touring range and once out of charge will drink much more fuel. Of course, the A3 40 TFSIe has other benefits. It can run in a pure EV mode and it feels a far more special piece of kit than a diesel hatch. Can you put a price on that? You can perhaps if you measure the savings you'll make in company car tax. And this model certainly scores as a car you can drive as an EV on short commutes to work, but which is capable of long weekend trips. As a technical showpiece, it's an intriguing thing. As a sales proposition though, you might need to scour the small print quite carefully.

Fill out the simple form below to get a quote for this Audi A3 Sportback 40 Tfsi E S Line 5dr S Tronic [17 Inch Alloy] lease.