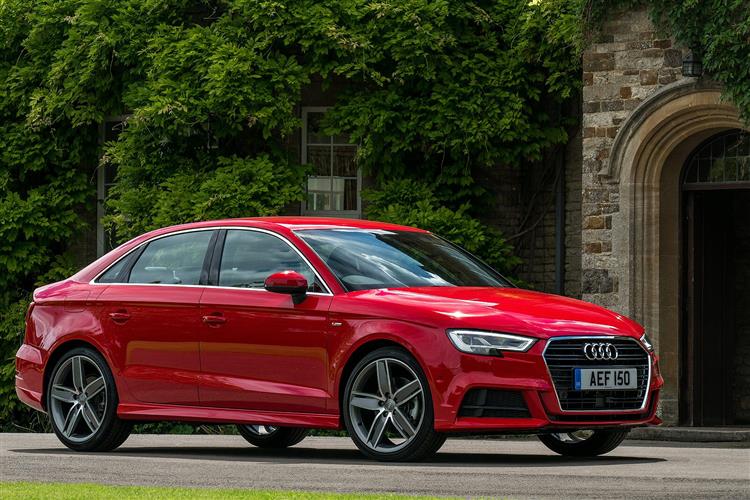 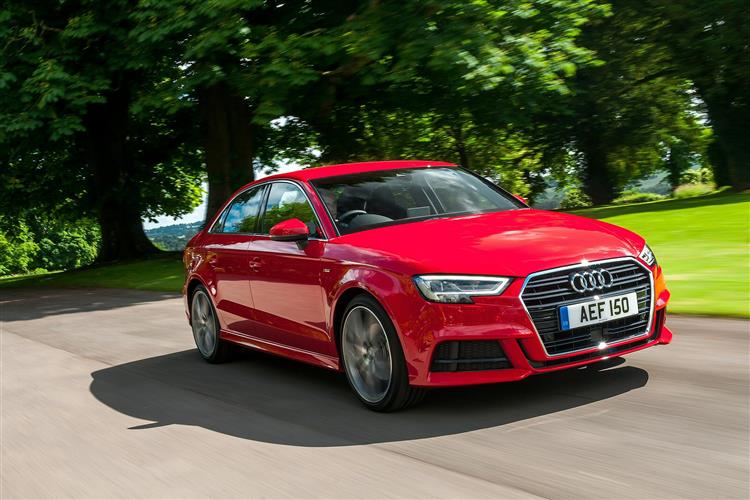 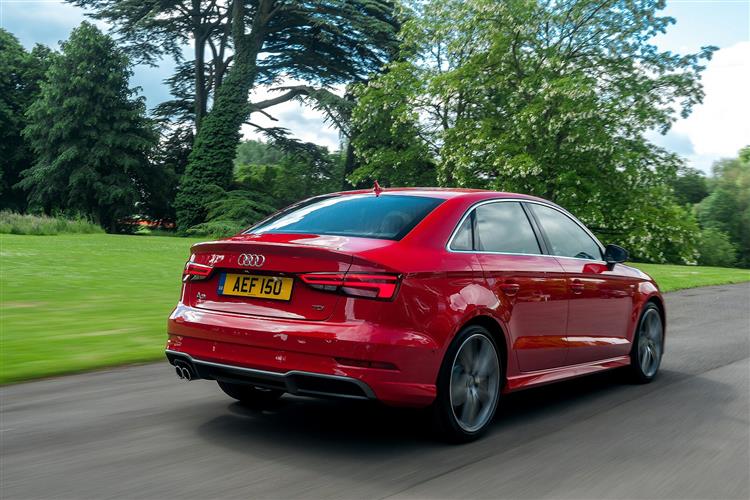 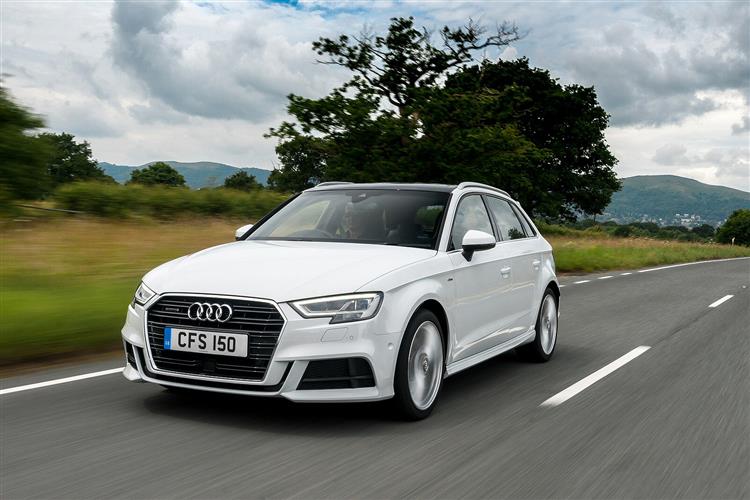 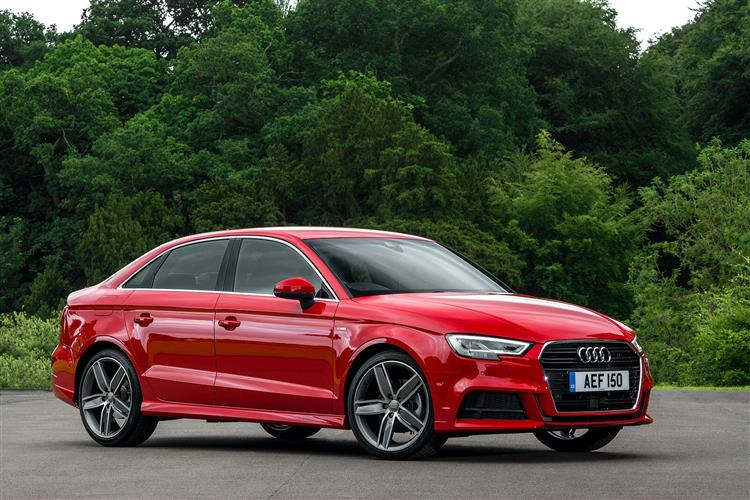 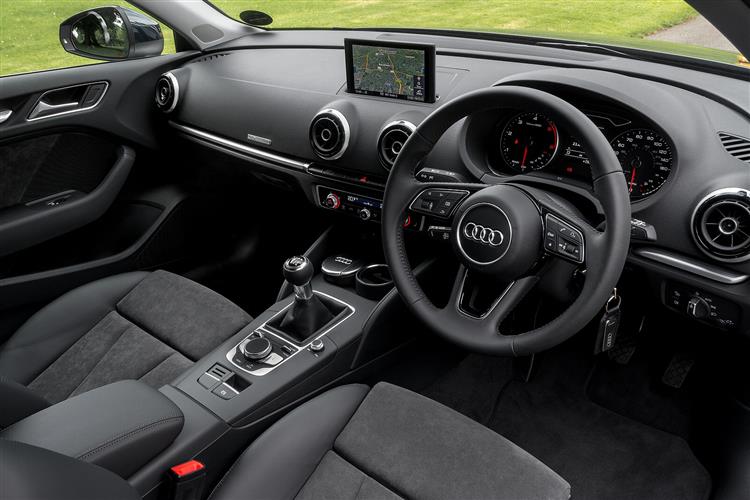 Audi first introduced the Saloon version of its A3 in 2013 as part of the third generation 'Typ8V' range. Then in 2016, significantly updated it, creating the car we're going to look at here as a used buy. The idea with this A3 Saloon was to bring the brand's cool elegance within the reach of those who might find the only slightly larger A4 model a bit of a stretch. We all like the idea of good things in sensibly sized packages. In essence, that's what this is.

The compact-to-mid-sized executive saloon. Every business carpark is stuffed with the things, most of them up-market German-badged offerings like Audi's A4, BMW's 3 Series or Mercedes' C-Class. Cars of this kind are now generations old and have got progressively larger, more sophisticated - and more expensive. So much so that in recent years, room has been created for a market sector to slot in beneath them. A segment with four-door saloons offering pretty much the same thing, but in a slightly more compact form. Cars like this one, Audi's A3 Saloon. The Ingolstadt brand first launched this model in our market in 2013 and from the start was well aware of the need to sell this one carefully. After all, it's traditionally been true that any four-door smaller than something A4/3 Series or C-Class-sized tends to get pretty much ignored on these shores. So the marketeers couldn't afford for this three-box A3 variant to be seen as a direct rival for minority sedan players like Volkswagen's Jetta or Volvo's S60. Instead, they had to pitch it as offering almost everything a buyer might get in their fully-fledged A4 model - but in a marginally smaller package with the option of some more efficient and affordable entry-level engines. The thinking person's compact executive saloon if you like. By 2013, Mercedes had already dipped a toe into this kind of segment with their A-Class-based CLA model, but thanks to its style and technology emphasis, that car was pitched at A4/3 Series or C-Class money. Which rather defeated the object of the exercise. This A3 Saloon in contrast, though not vastly cheaper than its A4 stablemate, always offered enough of a price saving to enable it to provide a cost-efficient alternative to that car for business buyers on the lower rungs of the management ladder. That proved to be an attractive proposition in our market with 17,000 A3 Saloons sold between 2013 and 2016. In truth though, this derivative never had to pay its way here, given that its main popularity was always in Audi's huge US and Chinese markets, countries where it's the A3 body style of choice. To further cement this variant's premium credentials, it got a whole package of key improvements in the Summer of 2016. There was a sophisticated new 2.0-litre petrol engine, real advances in media connectivity and even the option of the fully digital 'Audi Virtual Cockpit' instrument binnacle from the brand's TT sportscar. Buyers could also have a sporting S3 model and in 2017, a rorty RS 3 Saloon model arrived too. This facelifted car sold until it was replaced by a new generation model in mid-2020.

If this Saloon variant takes your interest in the A3 model line-up, you'll probably approach it with a couple of ready-made pre-conceptions. Either that it'll be some kind of lightly-shrunken version of the larger A4. Or merely an A3 hatch with a boot added on the back. In reality, neither of these expectations hit the mark. It's very much an A3, but a subtly different one, 11mm wider, 9mm lower and 146mm longer than the kind of comparable five-door A3 Sportback that many likely buyers will probably also be considering. The post-2016-era changes made to this revised 'Type 8V' model were primarily focused on the front end, where the familiar Singleframe grille was made wider and more sharply contoured. The headlamps that flanked it were also restyled to be flatter and more distinctive than before, with more modern xenon lighting replacing the old halogen units. Take a seat inside and the cabin quality you'll find there really sets this car apart at its price point amongst models from this era, with a really premium feeling of quality and class. The defining feature of the dash remains the prominent four air vents, styled to look like miniature jet engines and made up of no fewer than thirty individual parts including bright metal outer rings that are shaped for perfect grip. The two central vents sit above a smarter panel of ventilation controls that gained a piano black finish as part of the mid-life update, plus there was a restyled three-spoke leather-trimmed steering wheel. It's what you can view through this though, that probably represented the greatest change made as part of the 2016 package of update improvements - the optional 'Audi Virtual Cockpit'. Original buyers had to pay extra for this but if you find a car that has it, you'll get yourself a real cabin talking point, the set-up replacing the entire instrument binnacle with a 12.3-inch colour TFT screen that's fully digital and customisable, with smart 3D graphics and highly detailed effects. Anything this set-up can't tell you will almost certainly be covered by the slimline MMI infotainment display that glides out from the top of the dashboard to deal with audio, informational and phone-orientated functions you can prompt via a chrome-edged rotary controller in front of the gearstick. The retracting screen is 7-inches in size across the range and with these updated models, works with the useful 'Audi smartphone interface' that, through 'Apple Car Play' and 'Android Auto' smartphone connectivity, allows everything you access on your handset to be duplicated onto the slide-out monitor. And in the back? Well certainly, the two adults that'll most regularly be carried here should be as comfortable as they would be in a comparable A4 saloon on all but the longest trips. They'll also have slightly more legroom than they would in an A3 Sportback hatch, thanks to this sedan body style's extra 144mm of wheelbase. Finally, let's brief you on luggage space. Once you've lumped stuff over the boot's relatively high sill, you'll find 425-litres on offer here, another area where the wheelbase increase over an A3 Sportback pays dividends - there's 45-litres more than you'd get in that hatch model.

Fill out the simple form below to get a quote for this Audi A3 Saloon 30 Tfsi S Line 4dr [tech Pack] lease.