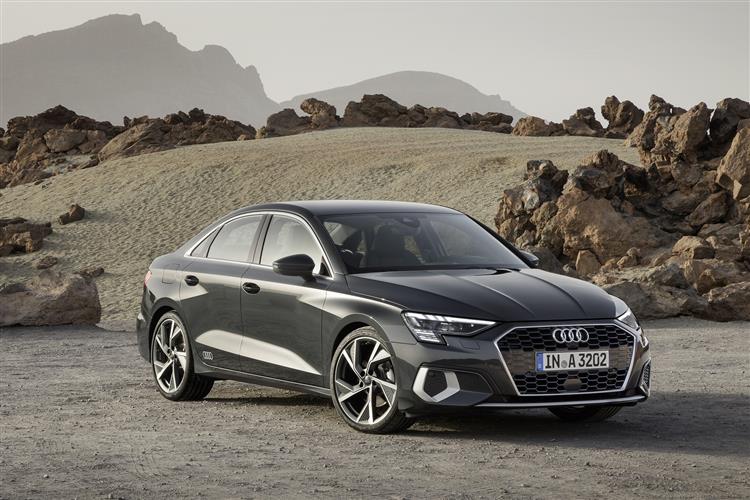 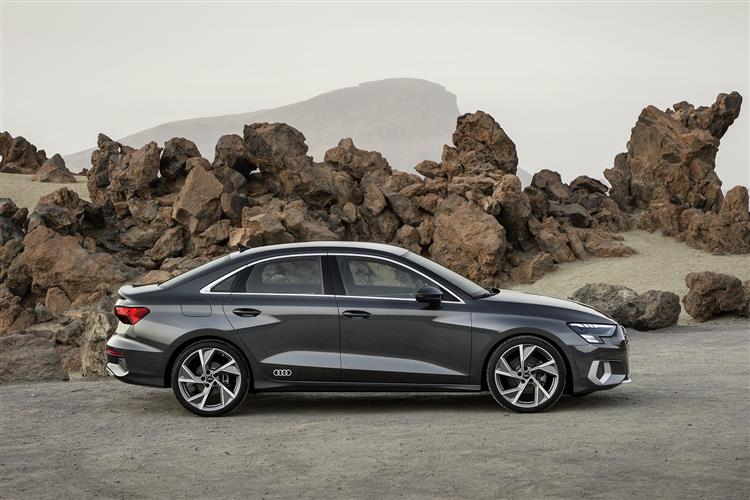 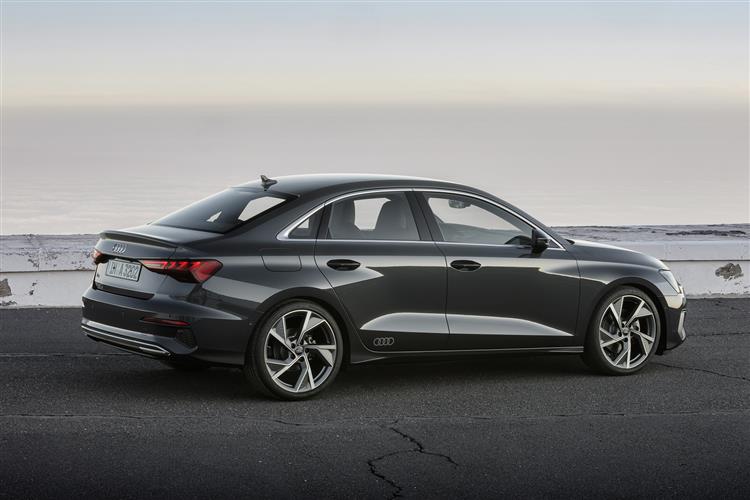 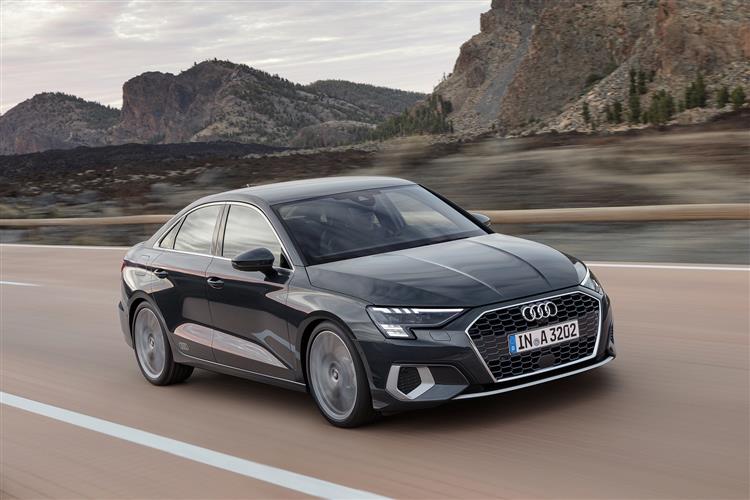 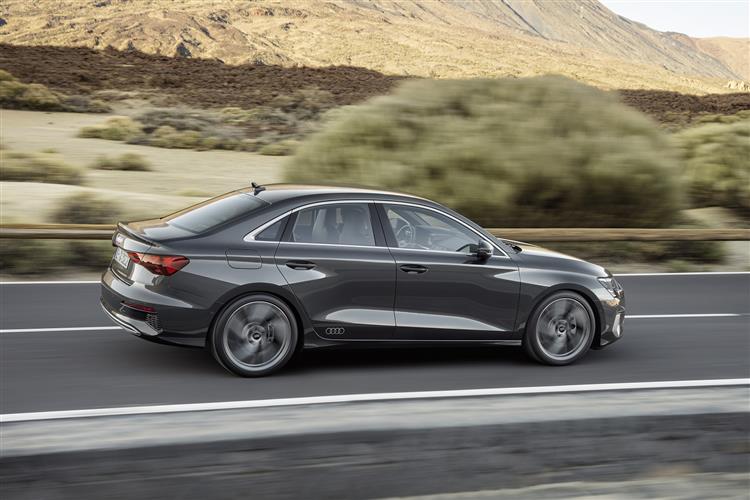 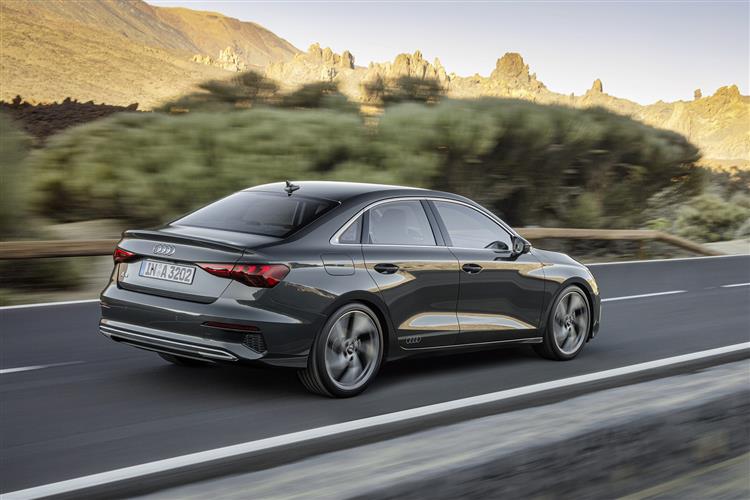 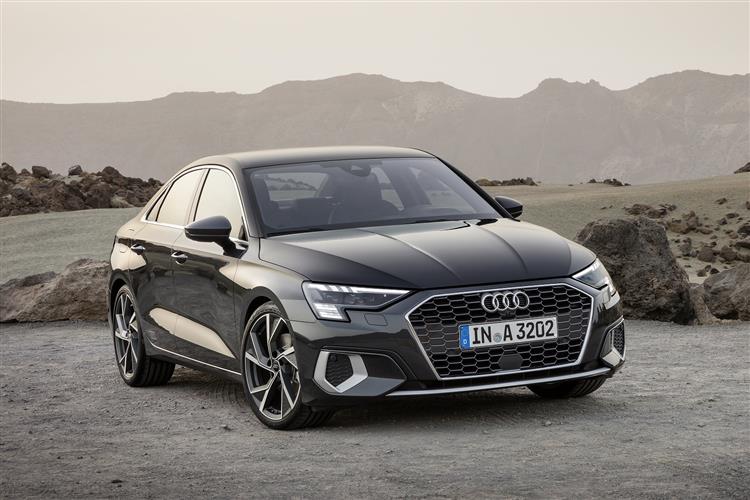 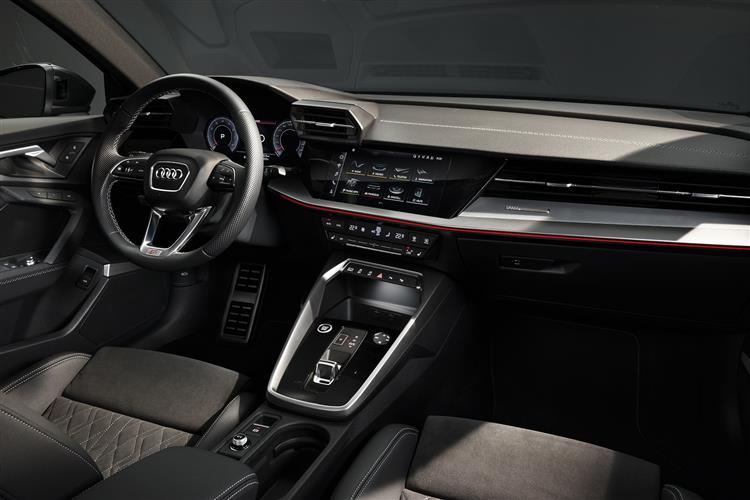 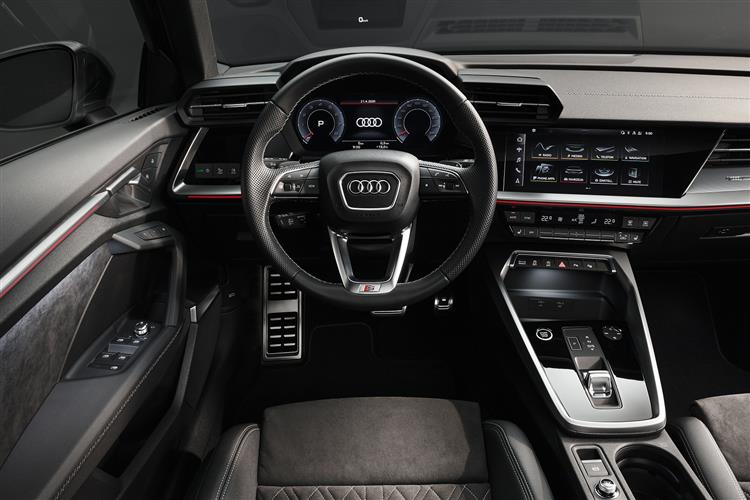 It's an Audi A3 - but not perhaps, quite as you know it. Here, we've the Saloon version, which in this second generation form has been designed to even more effectively bring the brand's cool elegance within the reach of those who might find the only slightly larger A4 model a bit of a stretch. We all like the idea of good things in sensibly sized packages. In essence, that's what this is. There's now a completely digitalised interior and cutting-edge infotainment, plus more unique light signatures, various electrified engines and a suite of innovative assistance systems enveloped in a completely redesigned, yet immediately recognisable body.

The compact executive saloon. Every business carpark is stuffed with the things, most of them up-market German-badged offerings like Audi's A4, BMW's 3 Series or Mercedes' C-Class. Cars of this kind are now generations old and have got progressively larger, more sophisticated - and more expensive. So much so that room has been created for a market sector to slot in beneath them. A segment with four-door saloons offering pretty much the same thing, but in a slightly more compact form. Cars like this one, Audi's A3 Saloon. The Ingolstadt brand first launched this model in our market in 2013 and from the start was well aware of the need to sell this one carefully. After all, it's traditionally been true that any four-door smaller than something A4/3 Series or C-Class-sized tends to get pretty much ignored on these shores. So the marketeers had to pitch this three-box A3 as offering almost everything a buyer might get in their fully-fledged A4 model - just in a marginally smaller package. The thinking person's compact executive saloon if you like. The approach worked and the first generation A3 saloon carved out a loyal following. But towards the end of the MK1 version's production life, it began to look a little frumpy compared to the rival premium-badged compact four-door coupe models that sold to much the same type of clientele - the Mercedes CLA and, latterly, the BMW 2 Series Gran Coupe. Hence the need for a slightly different approach from this MK2 A3 Saloon.

Take a glance at the powerplant line-up and, on initial inspection at least, you won't find anything particularly shocking if you happened to be familiar with it from before. The keynote mainstream engine is the 35 TFSI variant's 1.5-litre TFSI petrol unit with 150PS, which is offered in conventional form with a manual gearbox but which now gets Audi's 48-volt mild hybrid tech if you order it with the 7-speed S tronic auto transmission most A3 Saloon customers want. It's the other mainstream engine option that features in the 35 TDI model we tried, another 150PS unit, a 2.0 TDI diesel that has to be had with the S tronic auto. You can also talk to your dealer about a couple of lesser petrol and diesel powerplants. In the base 30 TFSI variant, a 1.0 three cylinder turbo petrol engine with 110PS (which again gets the mild hybrid tech if you order it with S tronic auto). And, in the base black pump-fuelled version, the 30 TDI, a de-tuned 2.0 TDI diesel with 116PS. More powerful future variants will get quattro drive and further electrification. And there's a sporting S3 derivative which develops 310PS from its 2.0 TFSI turbo petrol unit and gets to 62mph in just 4.8s. This performance model's standard quattro 4WD system has been lightly revised for quicker reactions that also now apply to the optional adaptive damping system you can have on all A3s, now hydraulically-activated. On the move in any version of this car, if you're an A3 regular - or a graduate from a Golf - you'll find that this Audi now has even more of the mature drive dynamics you'll be looking for, helped by a fully digital at-the-wheel experience and the optional embellishment of hybrid power and self-driving tech.

In a market where it competes with four-door coupe designs like the Mercedes CLA and the BMW 2 Series Gran Coupe, it was essential that this second generation A3 Saloon look a little more dynamic than its predecessor. It does. In contrast with the A3 Sportback, the Saloon's body line continues in a straight line up to the rear bumper. This emphasises its length - 15cms longer than the Sportback - and makes for elegant proportions in profile. The concave surface under the broad body shoulder further accentuates the shape's rear quattro 'blisters' and the lower sills, while the roof line, which tapers down from the B-pillar and finishes in a spoiler on the boot lid, draws inspiration from coupe design. This MK2 model A3 Saloon is sleeker than the old car (the aero Cd factor is down from 0.29 to 0.25). And it's a little larger than its predecessor too, 4cms longer at 4.5m in length, plus it's 2cms wider and 1cm taller. As usual with an Audi, the frontal focus point is the large Singleframe grille, flanked here by trapezoidal LED headlight units, under which are LED daytime running lights with specific light 'signatures' which differ by model. You might not expect much change in terms of interior space given that the wheelbase is the same as the old car, but the slight expansions in width and height have improved elbow room and, thanks also to a repositioned driver's seat, added an extra 2cms of front headroom. As with the MK4 A3 Sportback, there are big changes in the cockpit, which gains the digitalised 'black panel' technology lately introduced into most of the company's other models. A 10.1-inch centre-dash MMI touch display is standard and can be used to adjust the settings of the media selection, navigation, and extensive connect services. Also standard is the 10.25-inch 'Virtual Cockpit' digital instrument cluster we first saw offered as an option on the previous model. A larger 12.3-inch version of this display is also available. In the rear part of the cabin, as before there's reasonably comfortable space for a couple of adults but there's slightly more shoulder room than before. Out back, boot space is much as before, offering a 425-litre capacity.

Prices start from around £27,000 for the base 35 TFSI Sport model with manual transmission, rising to just over £32,000 for the 35 TDI S line S tronic. That means a premium of around £570 over the five-door Sportback body style. There are 'Sport', 'S line' and 'Vorsprung' trim levels. You will at least be getting plenty for your cash. The 'MIB 3'-generation MMI infotainment system has ten times more computing power than this set-up did in the previous model. MMI co-operates closely with the separate communication box, which performs all tasks relating to connectivity, including telephony and the LTE-compatible 'Audi connect services' package, plus of course it integrates a WiFi hotspot. Individual settings can be stored in up to six user profiles. They range from the seat position to the air conditioning settings, frequently selected navigation destinations, and frequently used media. Handwriting recognition (you can trace commands with your fingertip) and an advanced natural language voice control system also both feature. Audi has also upgraded its 'MMI navigation plus' sat nav system, which recognises the driver's preferences based on previous journeys, allowing the GPS software to generate suitable route suggestions. In doing so, it takes statistical experience values on time and traffic density into account, as well as real-time data on the traffic situation. Online radio and hybrid radio can also be installed upon request. The former provides access to online stations that are available worldwide, while the latter automatically switches between FM, DAB, and the online stream to ensure optimum reception at all times.

Audi is continuing is electrification strategy in the premium compact class, hence the emphasis on the MHEV mild hybrid 1.5-litre 35 TFSI petrol S tronic model in this MK2 A3 Saloon model range. The figures suggest that this variant manages 50.4mpg, with a CO2 return of 128g/km of CO2. That compares well to the figures of the conventional version of this engine allied to a manual gearbox (48.7mpg and 132g/km). The 35 TDI diesel S tronic auto model manages 62.8mpg and 119g/km. Most A3 Saloon buyers will want the MHEV auto petrol model which uses the same sort of set-up we've already seen on larger Audi models. A 'BAS' belt alternator starter-generator that with this four cylinder engine, powers a 48-volt main electrical set-up in which a compact lithium-ion battery in the boot stores energy harvested via a 'KERS' kinetic energy recovery system. During braking, the 'BAS' package can recover up to 12kW of power and feed it back into the battery. If the driver takes their foot off the accelerator at speeds between 34 and 99mph, the mild hybrid system will recuperate energy, while the car rolls in idle or coasts with its engine automatically switched off for up to 40 seconds. The belt alternator starter-generator restarts the engine the next time the accelerator is depressed, and does so faster and more gently than a conventional starter. All of this you'll particularly notice at urban speeds where the engine start-stop system is cutting in and out. The startstop range begins at just under 14mph, so you'll often find the car coasting up to the end of a traffic queue, a traffic light or a level crossing.

So, how to sum up? Well, this second generation A3 Saloon might not look that much different at first glance, but it'll feel so once you take a seat inside and get to grips with the enhanced media connectivity. We also think the introduction of the extra electrified engine technology is very significant. Otherwise though, the recipe is much as it was before and that'll see many continuing to like the statement this A3 Saloon makes on their behalf. It's smart and elegant without being showy. Nor does it unduly advertise its status as the smallest saloon Audi makes. Most who see you at the wheel will simply think you've bought an A4 and those who do spy the different boot badge will probably think you've chosen wisely. So there's very little not to like. Unless you were looking to make some sort of style statement: this car won't turn the heads of passers' by like a rival Mercedes CLA or BMW 2 Series Gran Coupe, but then that very discretion is a fundamental part of its appeal. As with any other A3, it's as at home in Belgravia as it is in Brixton, offering a democratisation of automotive luxury without a dilution of desirability. If you doubt that, you've only to get behind the wheel, for the interior is where this design really strides apart. You could be in a luxury car - and of course, in many ways, you are. Just one that perhaps better reflects the times we live in.

Fill out the simple form below to get a quote for this Audi A3 Saloon 30 Tfsi S Line 4dr S Tronic [comfort+sound] lease.