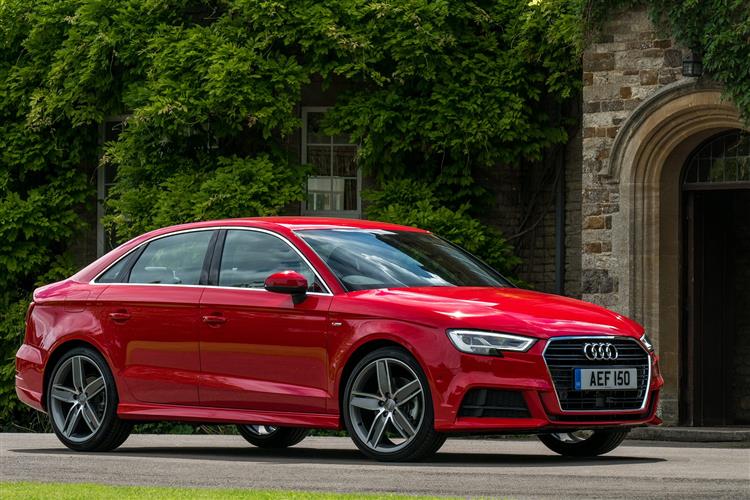 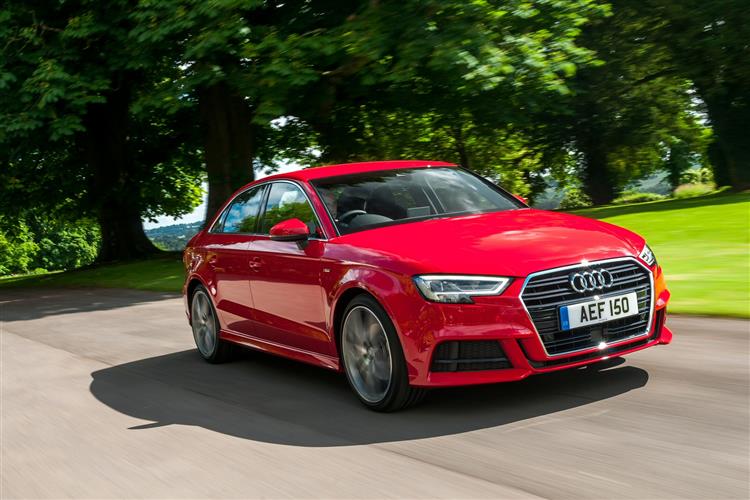 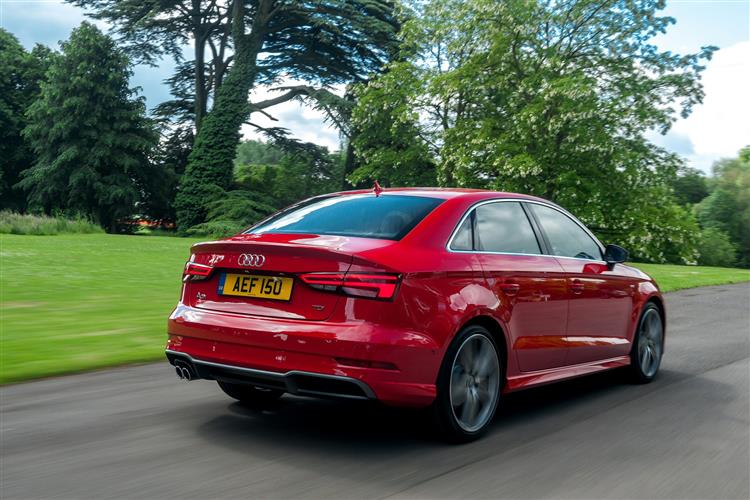 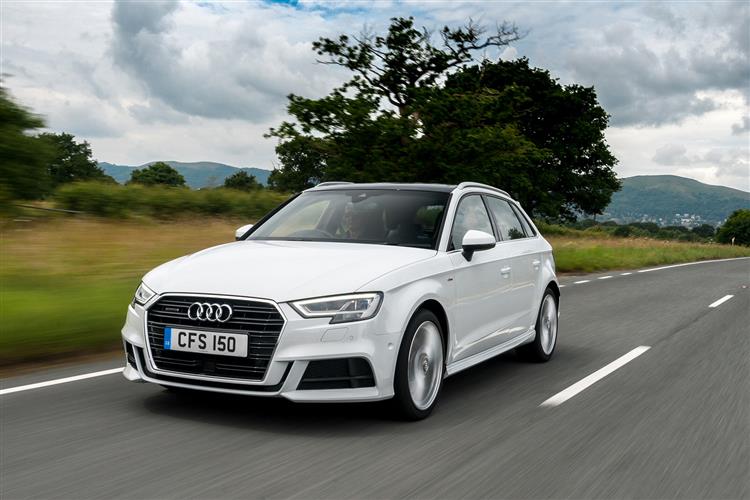 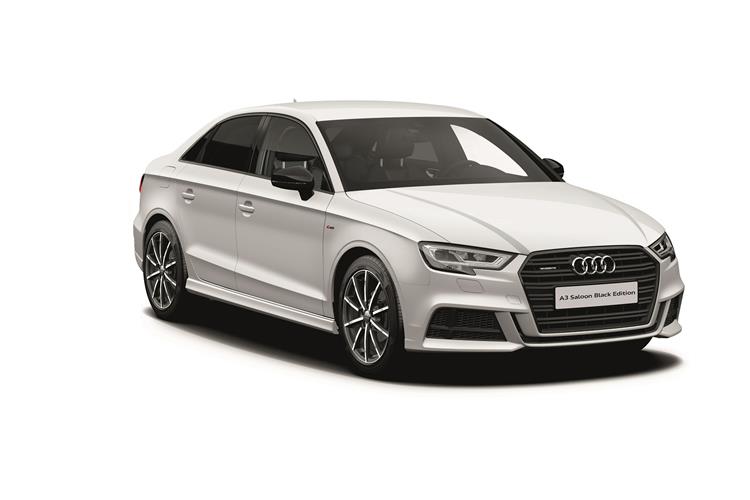 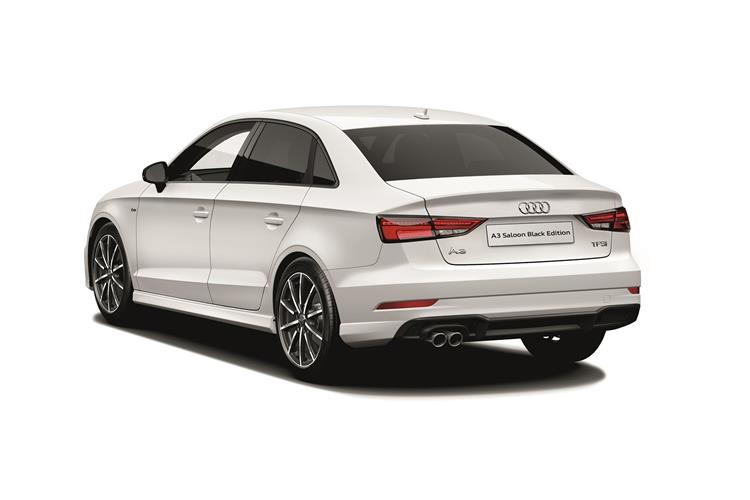 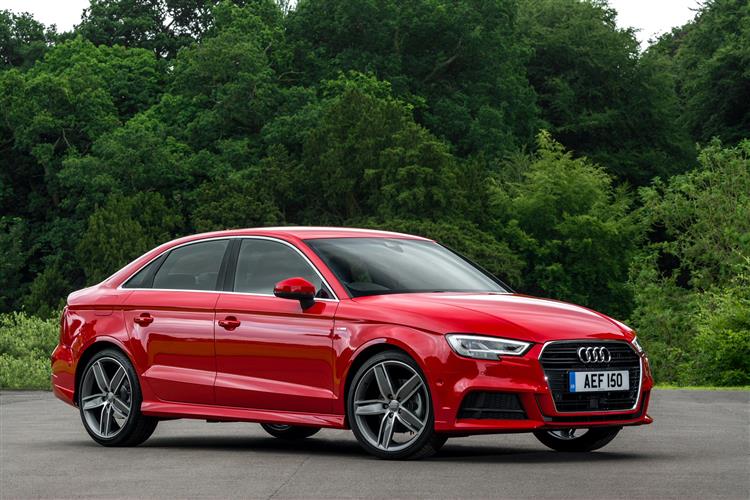 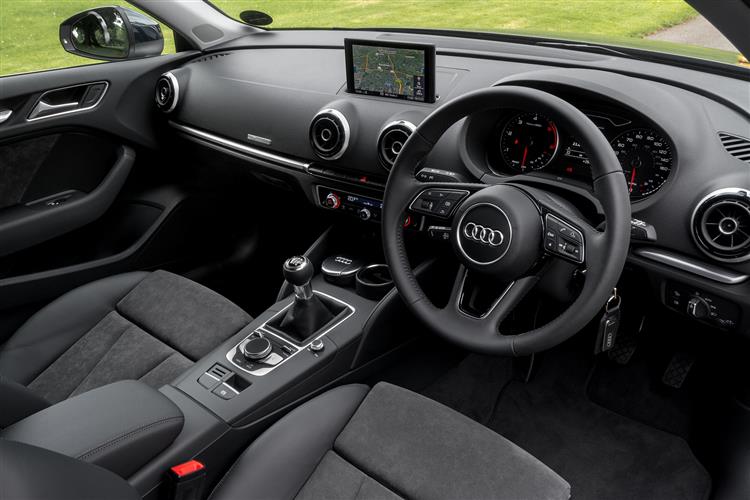 The Audi A3 Saloon might look like a shrunken A4, but it offers some of the very best efficiency measures in its class and brings a cool elegance within the reach of those who might find an A4 a bit of a stretch. This current version gets innovations like the Audi 'Virtual Cockpit' instrument layout. Which embellishes a classy, stylish and pretty practical basic package.

It's been a fact of vehicle development for many years now. Each successive generation of car gets bigger than its predecessor. Today's Ford Mondeos are bigger than the old executive class Scorpios. The baby Land Rover, the Discovery Sport, takes up as much space on the road as the original Range Rover. Audi's original A4, the car that really propelled the marque into the stratosphere of compact executive class profits, is a car very similar in size to the car we look at here, the A3 Saloon. It doesn't take a work of genius to figure out that the A4 Saloon has pushed ever further upmarket with each bigger generation and with the original version of the model we look at here, Audi saw fit to fill the void. It's a trend that repeats across the class, with the BMW 1 Series and the Mercedes CLA-Class increasingly accounting for sales that would once have gone to old 3 Series and C-Class variants. Both BMW and Mercedes have strong offerings in this sector and Audi needed to create a similarly strong contender, then maintain its competitiveness. Hence the changes made to this car in recent times including extra infotainment technology, an improved 4WD system and a more sophisticated 2.0-litre turbo petrol TFSI engine.

All A3 Saloons get an electromechanically assisted steering system and a next-gen stability control package which includes an electronic limited slip differential for composed deployment of power. The standard Audi drive select system lets the driver vary the throttle response, steering weighting and, where the S tronic transmission is present, the gearbox shift points. What's more, it can also be upgraded to manage the optional Audi magnetic ride system with its clever magneto-rheological fluid-filled dampers. Engine-wise, many will want to avoid the entry-level unit (a 116PS 1.6-litre diesel in the '30 TDI' variant) in favour of the two powerplants that make up the heart of the range. The most obvious choice is the one most buyers will probably make, the 150PS 2.0-litre diesel in the '35 TDI' model. Personally though, if we were buying this car, we'd take the other mainstream option, the '35 TFSI' petrol version which uses a 150PS version of the VW Group's 1.5 TFSI petrol unit with clever CoD, or 'Cylinder on Demand' technology. We're not sure we'd really want to go much faster than that in this car, but Audi centres are ready and willing to oblige those with a further need for speed. Diesel folk prepared to special quattro 4WD and tronic auto transmission get a pokier 184PS version of the 2.0 diesel unit in the '40 TDI' model. While those preferring petrol have the further option of a 190PS 2.0-litre powerplant in the '40 TFSI' derivative, which is the engine you have to have if you're looking for a mainstream petrol-powered A3 Saloon with the option of quattro 4WD. This variant also gets a slicker 7-speed S tronic auto transmission set-up than diesel drivers can have and with this fitted, 62mph is just 6.8s away en route to 155mph. The same system is also an option on the ritziest version of this car you can buy, the potent S3 flagship model, which mates quattro 4WD to an uprated 310PS 2.0-litre TFSI turbo engine able to power you to 62mph in a fraction over 5s. There's a top 400PS RS3 version too.

Yes, the A3 Saloon does look astonishingly like an A4 that's been scaled down slightly. Some might not be fans of Audi's Russian Doll styling approach and sure enough, there aren't too many surprises about the look and feel of this one. Still, given the upward trajectory of Audi's sales figures, perhaps that's no bad thing. Exterior changes made to this current version in recent years are slight but the front looks a little more purposeful than it once did, courtesy of sharp lines for the familiar and now broader Singleframe grille. The headlights are flat, with distinctive outer contours and can be ordered in Matrix LED form, in which form they are significantly brighter and constantly adapt themselves to avoid dazzling other road users, plus of course they never need to be dipped. Inside, the 'Virtual Cockpit' instrument display used in the TT and other pricier Audis is available in this one as an option. This displays the most important driving-relevant information in high resolution on a 12.3-inch diagonal TFT screen. The driver can switch between two views by pressing the "View" button on the multifunction steering wheel. The boot's carrying capacity amounts to 425-litres with the seats up - 45-litres more than the A3 Sportback. This capacity can be increased by folding down the split rear seat backs. The boot lid automatically swings upward when unlocked.

The A3 Saloon is only offered in high-spec Sport, S line and Black Edition trims, plus there are high performance S3 and RS3 versions. Most buyers of the petrol variants choose the S tronic twin-clutch auto transmission. Prices start from just over £28,000. Basically, you're looking at paying a £1,000 premium over a five-door A3 Sportback with the same engine and trim. The key option with this model is the clever 'Virtual Cockpit' system replacing the conventional instrument dials with an eye-catching 12.3-inch TFT display. But of course, there's much else to select from. Things like the LED interior lighting package, a panoramic glass sunroof, sports seats, heated seats, advanced key keyless access, deluxe electronic climate control with economy mode and adaptive lighting for the xenon plus headlights, which can be supplemented with variable headlight range control. Where Audi has made the biggest strides in recent years is in connectivity of electronic systems and the A3 fully embraces these advances. An 'MMI radio plus' set-up with an electrically extending 7-inch diagonal monitor is standard, as is the 'MMI navigation' system. Go further and specify the 'MMI navigation plus with MMI touch in conjunction with the Audi connect' package (what a mouthful!) and you can have many online functions in your A3 at high speed via the super-fast LTE standard. They include, for example, navigation with Google Earth and Google Street View traffic information in real time, as well as practical information on parking, destinations, news or the weather. There's also a free 'Audi MMI connect' app that enables other services, such as online media streaming and transfer of a calendar from a smartphone to the MMI. Mobile phones with iOS and Android operating systems can now be connected with the car via the standard Audi smartphone interface.

The A3 Saloon replicates the already excellent economy and emissions figures of the rest of the A3 range. The 1.5 TFSI engine used in the '35 TFSI' petrol model with the cylinder on demand system is particularly interesting. This offers 150PS of power so it's fairly brisk, but when you're cruising along a main road, it imperceptibly cuts power to two of the cylinders, so you'll be running along on two. This car can average 42.8mpg on the WLTP combined cycle and emit just 124g/km of carbon dioxide (NEDC on 17-inch wheels). It almost makes you wonder whether it's worth springing the extra for the diesel engine. The frugal 1.6-litre diesel unit in the '30 TDI' may be worth looking at but the 2.0-litre diesel '35 TDI' variant is notable less economic, though still manages 51.4mpg (WLTP combined) and 117g/km of CO2 (NEDC). Even the punchy 2.0 TFSI petrol unit in the '40 TFSI' S tronic will do 38.2mpg on the WLTP combined cycle and emit 145g/km (NEDC).

It's easy to get a little blase about cars like the Audi A3 Saloon, to take its achievements for granted somewhat but let's pause for a minute and consider not the numbers but the philosophy behind this car. It's properly smart, offering a compact, light and efficient car without being overblown. Its key problem is probably the A3 Sportback, a car that's all of these things and which offers the added practicality of a hatchback. Still, there's little doubt that the A3 Saloon looks a good deal more upmarket than a Sportback. In fact most would have difficulty distinguishing it from an A4 without a sneaky look at the badge on the back. While it won't turn your head like a Mercedes CLA, there are many who prefer Audi's more discreet take on this more compact compact executive saloon. As the A4 has become bigger and more sophisticated, it has created a space below it for Audi to demonstrate how well it does clean and elegant.

Fill out the simple form below to get a quote for this AUDI A3 SALOON lease.